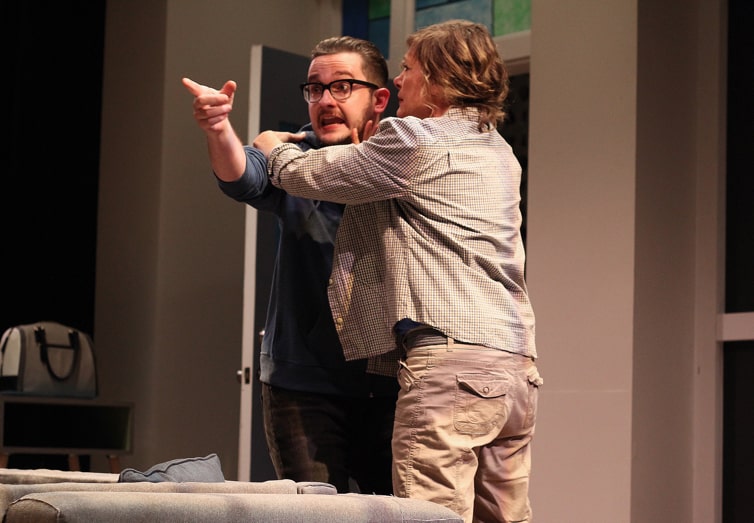 ACTING OUT: ‘The Thrush & The Woodpecker’

Melissa Foulger and Steve Yockey never realized they would be collaborating a decade later after working on “Iphigenia,” their first project together at 7 Stages in 2004. The close friends, both of whom are out, have formed a strong professional bond. Yockey’s thriller, “The Thrush & the Woodpecker,” opens this weekend at Actor’s Express (in repertory with his drama “Blackberry Winter”) with Foulger—who has directed more than 30 shows locally—at the helm. Georgia Voice caught up with Foulger in advance of the show’s opening this weekend.

Georgia Voice: Tell us about the show.

Foulger: There are three characters. Brenda (Stacey Melich) is the mother to Noah (Matthew Busch). He has been kicked out of school, and they are dealing with that. A woman (Kathleen Wattis Kettrey) re-appears in their life—a mystery to Noah—and causes a lot of trouble in typical Steve Yockey fashion.

When did you first read the script and how has it changed since then?

I got it about a year ago when I was approached to work on it. Steve did a development process at the Express a few years ago. The theatricality he is famous for is much more clear and concise and the relationships have evolved and are much cleaner. Those are the biggest things I’ve noticed.

When did you two meet?

It started when I was working at 7 Stages. He approached me about being the dramaturg on “Iphigenia.” We had a great working relationship. From there he and I began working on the intern showcases at Actor’s Express. He would write and I would direct. As he continued to work and I became an associate artist at Express, he asked that I work on his work. The rest is history.

How many shows have you two done together?

We did five as part of the intern program and then there was “Large Animal Games,” “Wolves,” “Pluto” and now “Thrush.” So nine.

Why do you work so well together?

We have similar ideas about what theater and the experience should be. It should move people in a variety of ways. We get each other. We have a shorthand; we speak the same language, have the same aesthetic and a mutual respect. We want work that makes people question the world they are living in.

What can LGBT audiences get from this?

I think that there are messages about family and identity, questioning how you live your life. I think those themes can translate well. There are also moments in the show, including a fight, that I call the “Dynasty”/Krystle Carrington kind of moments. Those are not campy; they harken back to the idea of taking things to another level. It’s horrifying yet fun to watch.

‘The Thrush & the Woodpecker’

in rep with ‘Blackberry Winter’