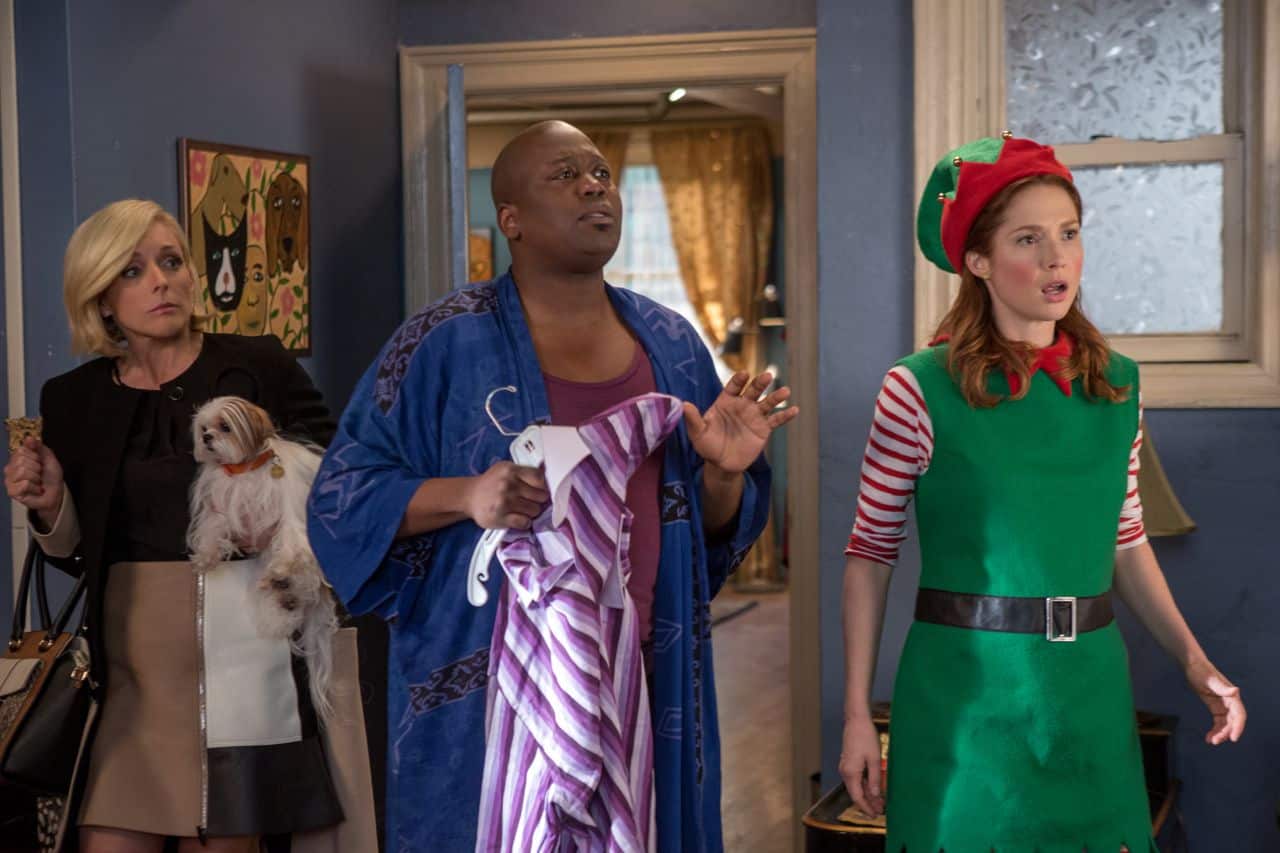 So Burgess can retire now, right?

“Oh no, I’m just getting started,” says Burgess, who originated “Sebastian the Crab” in the musical version of “The Little Mermaid.” “There are so many races to love on!”

Not to mention, there’s also the second – and hopefully third, fourth and eighth – season of Netflix’s “Unbreakable.” The 37-year-old plays Titus (a variation on his real name, with just one “s”), an aspiring and very gay Broadway performer who lives with an unworldly doomsday-cult survivor named Kimmy (Ellie Kemper).

But back to that penis song…

What was it like seeing “Peeno Noir” take off the way it did?

I don’t know that I gave it as much thought or attention as attention was paid to it, and that’d be the honest truth. I mean, obviously I paid attention because I launched my own line of Pinot Noir (called “Pinot by Tituss”), but it was lovely to know that people thought it was funny and had taken ownership of it, but it’s become something other than what it initially was. People recite those words and tell me that their office breaks out into it just as release – no one’s thinking about what it actually meant – so it’s taken on a life of its own separate from the show. But it’s awesome and I love it, and I hope they find something as equally exciting and satisfying about this season as they did last season.

We get to learn more about Titus’s “straight life” this season. Who were you during your straight life?

Gay! (Laughs) Honestly, I had a formal conversation with my mom when I was 19, but I don’t know that I was ever in the closet, if I’m being perfectly honest. I never had the “I have to tell the world” mindset.

How much of the character is you?

I’m gonna be honest with you: very little. We share a similar wicked sense of humor and we both, of course, love musical theater and Diana Ross, but my energy lives a lot lower to the ground than his does and I don’t yearn for the spotlight the way he does. The fact is, I really, really enjoy my alone time, so I don’t crave that the way my character does. In fact, by the time we’re done filming the season, I’m quite exhausted. He requires such a high level of vibration, and so by the time it’s done, I’m happy to hang him up for a few months.

Titus’s breakthrough moment this season involves him in geisha garb. I’m just waiting to hear what the critics have to say about that.

Oooh lord. When I read that script I thought, “Jesus. Last year it was the wolf (Jacqueline, who is “American Indian,” unleashed a primal howl during the finale); this year it’s gonna be the geisha.”

How prepared are you for any backlash?

Oh, I’m prepared. I’ve had six months to prep for the harsh criticism. The thing about (creators) Tina (Fey) and Robert (Carlock) is, they don’t shy away from the current climate of the country, and while on a surface level it might seem like they’re giving these silly stereotypes a platform, I think it’s just sort of exacerbating what we have become so sensitive to. But if it’s a headline, my friend, it is fair game.

Tina and Robert are two of the most informed people I’ve ever met, and sometimes we get scripts and I think, “Surely this has not happened somewhere,” or, “Surely this is something that they’ve made up.” So I’ll get on the internet and there it is. The transracial storyline – people feeling as though as they remember past lives – when I read these headlines, it’s funny because it’s so unbelievable. So yeah, it’s a fine line, but they treat it with great sensitivity and great class – and it is, after all, a comedy.

Yeah – the geisha episode! I didn’t wanna do it.

What were you hesitant about?

I’m in white face, man! I didn’t want anyone to think I was disrespecting a culture. But what we did was make certain that, while it’s funny, he’s extremely sincere about what has happened to him. He’s for real, and as long as he’s for real in his interpretation and his acknowledgement of his past lives then it’s not offensive. There’s something oddly touching about the end of that episode, and I think it also serves a greater storyline, which is, Titus has finally taken the initiative to take control of his career. No one else is giving him a job, so he wrote one for himself, so that is what’s smart about it.

What do you think when people call Titus a stereotype?

I think they didn’t see the same show that I filmed. Titus is more everyman than Jacqueline, Kimmy or Lillian. He’s broke, he can’t afford to pay his rent, he’s chasing this career that has not materialized, he has trouble in relationships, at least last season, and he is not a size 32 in the waist. He gets rejected when he attempts to do something good with his life, even if it’s one of his bizarre “this is gonna make me famous” excursions. Most Americans are living lives unfulfilled. Most Americans don’t have the money that Jacqueline has. Most Americans, especially black people, don’t get away with committing murder like Lillian did. So they’re not paying attention, that’s what I think.

Your performance of Diana Ross’s “Believe in Yourself” while accepting the Human Rights Campaign’s Visibility Award late last year was so moving. Why is being out and visible important to you?

Honey, how much time do you have? (Laughs) I know what dark places feel like and I know what the absence of love and community feels like, and if I had a me when I was growing up to see, I would have perhaps been familiar to you guys a lot sooner than two years ago. For that reason, I don’t want any young person or any old person to not acknowledge who they came into the world being through all of their past lives. This current one that you’re experiencing is one that should be fully realized – otherwise, you are the walking dead and what is the point?

Chris Azzopardi is the editor of Q Syndicate, the international LGBT wire service. Follow him on Twitter @chrisazzopardi.