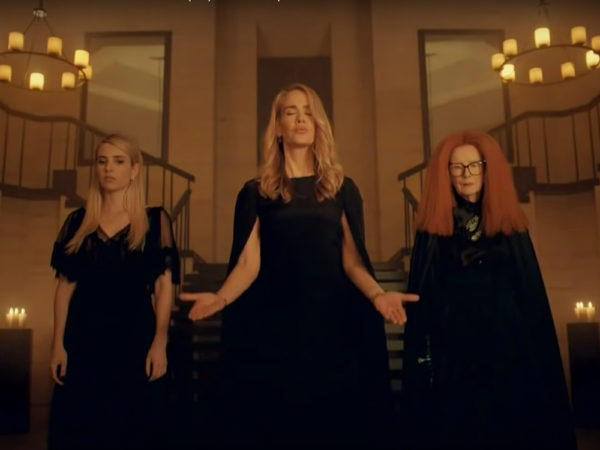 It looks like 13 is a lucky number for “American Horror Story.”

The widely popular FX anthology series, created by Ryan Murphy and Brad Falchuk way back in 2011, has been renewed for at least three more seasons – meaning three more past the currently-in-production tenth season set to air later this year, according to Deadline. That means the show will make it all the way to season 13 – a perfectly fitting milestone for “AHS” – and potentially beyond.

FX – now owned by Disney – announced the good news via John Landgraf, Chairman of FX Networks and FX Productions, at a press tour event for the Television Critic’s Association in Hollywood, where he revealed that the cable network had made a deal with 20th Century Fox Television to produce the additional three entries.

Late last year, Murphy teased in a previous interview with the media outlet that the show would likely continue, saying “It’s FX’s most highly rated show in the history of the network, it’s had 96 Emmy nominations. I hope, knock wood, will get past 100. It’s one of the most awarded and lauded shows of that network. I have every good intention of it staying there and I think [John Landgraf] does too. We’re talking about it. We’re trying to figure it out.”

At the TCA press tour, Landgraf commented, “Ryan and Brad are the undisputed masters of horror TV, having created the anthological limited series with ‘American Horror Story’ and sustaining its success for nearly a decade as FX’s highest-rated series… AHS has showcased a wealth of award-winning actors since day one and we appreciate the contributions of everyone, including Ryan, Brad and fellow executive producers Tim Minear, James Wong, Alexis Martin Woodall and Bradley Buecker, the writers, directors, cast and crew for each new, unforgettable installment of ‘American Horror Story.’”

The show, as every fan knows, explores a different theme with every season, scaring its audiences with stories set in a haunted house, an asylum, a witches’ coven, a circus freak show, and many other dark corners of American cultural imagination. The most recent installment, “AHS: 1984,” paid tribute to the classic slasher films of the eighties with a bloody tale of a cursed summer camp.

No official word yet on the theme for season ten, though Murphy hinted in the earlier interview that it might be partly set in space.