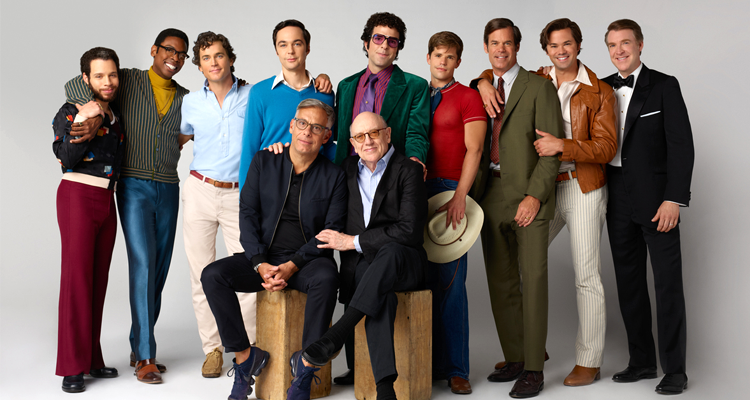 An Iconic LGBTQ Remake and a New Thriller

Two new gay-themed films are both available through streaming services right now, one a remake of an iconic gay classic and the other a chilling suspense thriller.

After its spectacular run as an off-Broadway play beginning in 1968, Mart Crowley’s “The Boys in the Band” became a 1970 film, directed by William Friedkin. Its story of pre-Stonewall men has become legendary, even though in the LGBTQ community it is simultaneously cherished and loathed. Nonetheless, it was the first play/film that brought together a group of gay men in three-dimensional leading roles. Back in 2018 an all gay cast took the show to Broadway to considerable acclaim, with the play winning the Tony Award for Best Revival of a Play. Now with Ryan Murphy as one of the producers and Joe Mantello directing, the work has been filmed for a new generation.

It’s 1968 in New York City and Michael (Jim Parsons), who works as a screenwriter, is hosting a birthday party for Harold (Zachary Quinto). The first to arrive is Donald (Matt Bomer), with whom Michael was once in a relationship. Others soon arriving are Larry (Andrew Rannells), a commercial artist living with Hank (Tuc Watkins,) is a teacher who has just separated from his wife. Other guests include Emory (Robin De Jesus), a decorator with a constant quip on his lips, librarian Bernard (Michael Benjamin Washington) and a young Cowboy hustler (Charlie Carver) who arrives as a gift for Harold.

A night of fun, frivolity and drinking gets more serious when Alan (Brian Hutchison), Michael’s heterosexual roommate, arrives needing to talk. The group move inside and the party turns sour. The claustrophobic nature of the men being inside works quite effectively.

It’s a swell ensemble, and it’s great to see the all-gay cast of the recent Broadway version return for this. Of the large cast, Bomer (unexpectedly flashing some full-frontal nudity), De Jesus (who was nominated for a Tony for his role) and Quinto are the most convincing. Quinto in particular brings a lot more nuance and soul to the role of Harold than Leonard Frey did in the original. Rannells is the sole cast member who doesn’t convince. He seems a little out of place amongst the others and his Larry lacks depth.

It’s almost a word for word remake of the original, and the material is observant. “The Boys in the Band” was especially vital when it came out. It was tough to watch back then, and it’s just as tough to watch in 2020. Yet it’s undeniably well executed and Crowley – who sadly passed away earlier this year – and his dialogue crackle, even today.

A rather disturbing little film, “Spiral” opens with a scene of two young men getting bashed in a parking lot in 1985. It’s a flashback belonging to Malik (Jeffrey Bowyer-Chapman). Ten years later he and his boyfriend Aaron (Ari Cohen) have decided to move to a new town to raise their 16-year-old daughter Kayla (Jennifer Laporte). Their first encounter as they are pulling across the bridge into their new location is having a brick thrown at their car. Malik has some run-ins with some neighbors and later sees some of them hosting an odd party. He begins to sense all is not right in his new home, especially when someone breaks in and spray paints “Faggots” on a wall.

The central couple is clearly defined here. They are having to face being both a gay and interracial couple in a conservative town. Malik is staying at home working on a book and is more aware of the creepy things that are happening around him. There is some tension between the two men, while Kayla begins seeing a local boy. Some comparisons have been made to “Get Out,” but while “Spiral” is long on style it can be a little loose and clunky narratively. The film is directed by Kurtis David Harder and written by John Poliquin and Colin Minihan, whose 2018 “What Keeps You Alive” worked much better. Yet there’s no denying this gets under your skin.