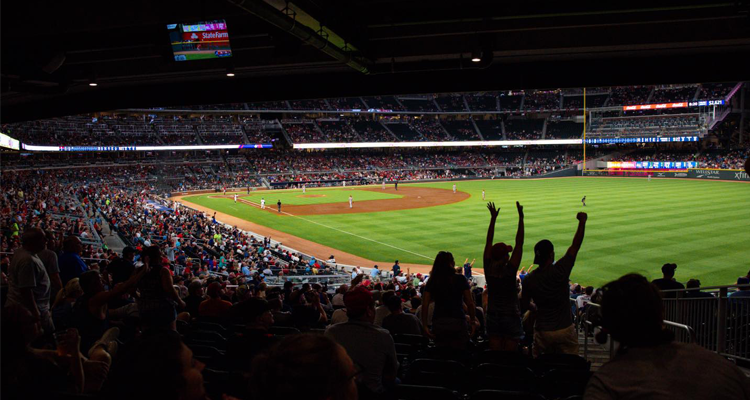 Atlanta Braves playing at the SunTrust Stadium. / Photo via Facebook

Spring sports are underway in Atlanta! Here’s a brief LGBTQ look into the world of Atlanta sports, from the major league to recreational teams.

The Atlanta Braves began their 2022 season on April 7 with a loss against the Cincinnati Reds. At the time of writing, they are third in the National League East with 16 wins and 19 losses. Their next home game is on Saturday, May 21 at 6:10pm against the Miami Marlins.

The Braves also have a special LGBTQ game coming up. The team’s Pride Night will be on June 22. The Pride ticket package includes entrance to the pregame party at the Coca-Cola Roxy at 5:20 pm, which will feature DJ Kimber from Nonsense ATL, a ticket to see the game against the San Francisco Giants, and a 20 oz Tervis tumbler with a rainbow Braves logo to take home.

The price of each ticket also includes a $3 donation to Lost-N-Found, an organization working to end LGBTQ homelessness in Atlanta. To purchase your ticket, visit mlb.com/braves/tickets/specials/pride.

At the time of writing, Atlanta United has a streak of 13 games unbeaten at home with 2-2 draw against New England Revolution. The team will continue its regular season on May 28 against Columbus Crew at 7 pm. Atlanta United is currently ranked seventh in the Eastern Conference with four wins, three draws, and four losses.

All Stripes, Atlanta United’s LGBTQ supporter group, hosts tailgates before every regular season home game in Lot 17. $10 to $15 gets you three drink tickets and a fun group of people to get you warmed up for the game. For more information, visit allstripesatl.com/events.

The Atlanta Dream is partly LGBTQ-owned and the only WNBA team co-owned by a former player. Renee Montgomery became co-owner of the team alongside Suzanne Abair, who is also LGBTQ, and Larry Gottesdiener after the Women’s National Basketball Association and the NBA board of governors unanimously approved the sale in 2021. Kelly Loeffler, a former anti-LGBTQ U.S. Senator who lost her seat to Raphael Warnock, previously owned the team.

The Dream began their season on May 7 with a win against the Dallas Wings and is ranked second in Eastern Conference with three wins and one loss. Their next home game is on May 24 against the Washington Mystics at 7 pm.

Outside the world of professional sports, there are several upcoming events among Atlanta’s LGBTQ recreational leagues.

Big Peach Softball returns to Atlanta this Memorial Day Weekend! The weekend begins with the official kickoff party on May 26 at The Hideaway. Round robin games, of which all teams will play two, begin on May 28. Double-elimination continues into May 29. Learn more at hslbigpeach.org.

Ho Sho Atlanta is Atlanta’s only live-singing, choreographed drag troupe in the city. Ticket sales will benefit Atlanta Bucks Rugby, as well as PALS Atlanta. The show will be held at City Winery and will start at 6:30 pm. Buy tickets at citywinery.com and learn more at hoshoatlanta.com.

Atlanta Pride Run, hosted by Front Runners Atlanta, is a 5k through Piedmont Park benefitting LGBTQ charities such as AID Atlanta, Jerusalem House, Joining Hearts, Lost-N-Found Youth, Out of the Closet, Positive Impact, and Track Georgia. This year’s theme is “Stronger Together.”

Check in starts at 7 am and the race starts at 8:30 am. There will be a post-race celebration at Guac y Margys Midtown at 11 am.