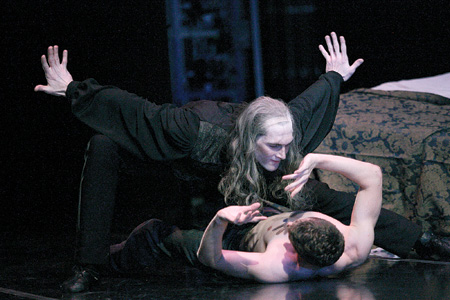 When the Atlanta Ballet presents Michael Pink’s “Dracula” next week at the Cobb Energy Centre, it pays farewell to one of its most prominent members.  Openly gay Brian Wallenberg is calling it quits as a dancer. He has been with the Ballet for 15 years now, acting as a performer for 13 years and working as the social media coordinator for the last two.  His first appearance with the troupe was in 1998 with the show, playing Harker, the same character he takes on in the remount.

Wallenberg realizes that he is no longer as young as when he first danced the part. “My character gets beat up a lot in the show,” he says. “I had my first rehearsal and I felt beat up. (Dancing now compared to when I started), I have to take better care of myself.”

Two years ago he quit dancing on a regular basis but knew that he would be available for specific projects if they came out. When this one did, he was game.

He admits that “Dracula” has a special place in his heart, and has long resonated with the LGBT community. “There’s something so sensual and sexual about vampires,” he says. “This is such a piece of theater. Everyone seems to know the Atlanta Ballet for ‘Dracula.’ The show has so many homoerotic moments in it. The vampires are just looking to feed but it seems so sexual.”

The Atlanta Ballet hosted the North America debut of the show in 1998. It’s been five years since they last staged it.

Wallenberg will perform three times during the two week run, and his final performance will be at 8 p.m. on February 16th. That performance will be the company’s NiteOUT at the Ballet. (Discounted tickets (up to four) are available at tickets.atlantaballet.com, using the promo code OUT.)

The NiteOUT evening materialized after Wallenberg approached the company’s marketing department about inviting his gay friends to a performance and they all decided to make a special night out of it. He is hopeful that the company will have more similar nights in the future.