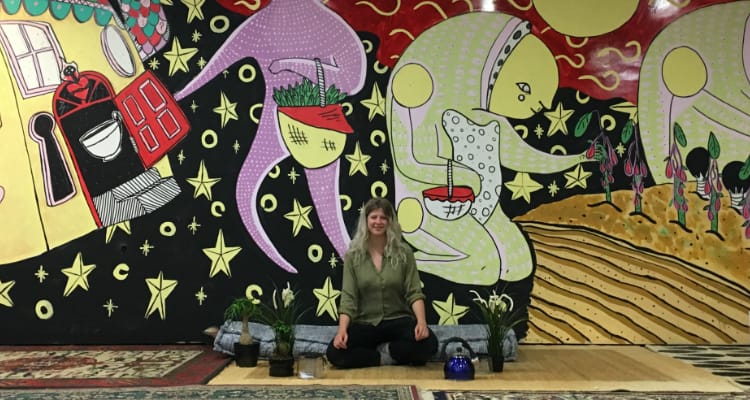 Colony Square in Midtown looks a little different these days.

That’s because the space is taken over by the Hambidge Creative Hive, a multi-discipline group of artists transforming empty retail areas into interactive experiences for Atlantans and tourists.

“This is not going to the High Museum or going to a gallery show. This is kind of artists welcoming you into their creative process. That’s what we’re celebrating here as the Hambidge Center; just about the creative freedom and nurturing artists, and just really welcoming the public behind the veil so to speak,” said Jamie Badoud, executive director of the Hambidge Center in Rabun Gap. “Art doesn’t just happen. There’s a creative process and there’s mistakes and what we’re trying to do is really encourage the artists to embrace those failures and mistakes and continue to work through it.”

Traditionally, the Hambidge Center, a 600-acre artist retreat, takes on eight creative souls at a time, giving them privacy and space to develop their crafts. Each year, the Hambidge Center holds an art auction in Atlanta to raise funds to support its creative mission.

This year, the usual venue is under construction, so Badoud had to find a plan B. Midtown Atlanta’s Colony Square provided not only a space to hold the auction, but a unique opportunity to develop a three-month, open-to-the-public “artist hive.”

“The past few years at the [previous venue] we’ve been implementing artists doing things that night. … A lot of work goes into it, and it’s just over in one night,” Badoud said. “We shared with [Colony Square] the idea of, listen, Hambidge is connected to an incredible group of artists in all disciplines, and artists really need an opportunity to have space and explore their own work. How exciting would that be in a space right there in the center of Atlanta?”

He pitched the idea of having artists occupy the empty retail spaces and things snowballed quickly. PNC Bank and Skyy Vodka came on as sponsors, allowing Hambidge to select about a dozen artists to create inclusive art experiences in the space.

“This is about studio space in the city and it’s an experiment. It’s not about creating a regular gallery show. It’s about a living, breathing, evolving space that has the opportunity to engage with the public in a unique way,” Badoud said.

Watts grew up traveling between Mississippi and Italy, and was influenced in her photography and healing arts by both Southern folk art and Italian Renaissance pieces.

“Largely the work I’ve been doing is dealing with female identity and nature … looking at traditional myths and re-writing them in my own Southern queer experience,” she said.

Her collective space at the Hambidge Hive is called “Hive Mind Arise,” and deals with the intersection between art and healing.

“Right now it’s an experimental tea house, a performance venue and a healing center. I’m trying to make a safe space to chill other than a bar,” she said. “A lot of the photography work I do is based around my personal spirituality and kind of creating that luminal space between this reality and nature.”

She said visitors to her space should come expecting a few minutes to chill out and relax with a soothing glass of tea — “an approachable medicine” — and participate in one of the various healing programs that will be available, including reiki and yoga.

Atlanta-based movement artist Sean Nguyen-Hilton will use his space to connect with the greater Atlanta dance community. He’s collaborating with an installation artist to redefine the retail spot with natural elements, and a special performance as part of the art auction, but is most excited to rejuvenate the performance of “Hurt.” This piece was originally put on by his company Fly on a Wall, and uses dance and sound to stimulate brainwaves.

“We were wondering if we could get everyone, the performers and the audience, on the same wavelength to get a more unified performance,” Nguyen-Hilton said.

During the day, dancers are able to come practice, and the public can watch, put on headphones and give their feedback.

“We’re hoping that people, when they come in, they see other work at the Hive and start to perceive Colony Square in a different way,” Nguyen-Hilton said. “A lot of people in Midtown work in the building. There’s a lot of suits that come through here for lunch, so maybe it will give them a little reprieve. Maybe it will help them with whatever they’re going through.”