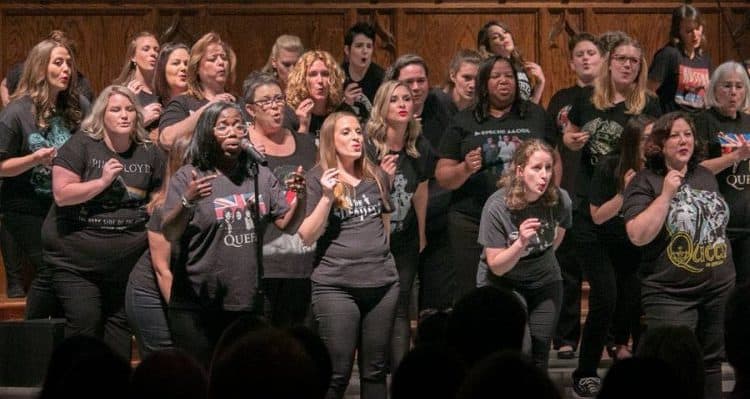 Nearly a year ago, the global LGBT community first mourned the loss of 49 lives taken in an act of senseless violence when an extremist attacked Orlando’s Pulse nightclub. The victims were largely Latinx, as it was Latin night at the gay club.

A number of Atlanta organizations will hold memorials to honor the victims, but Voices of Note wanted to do something a little more positive.

“This is the one-year commemorative event to honor those that were lost during the Pulse shooting, as well as learn from that community about how they responded, and how they chose not to let the negative define that community, but truly come together in acceptance, tolerance and love,” said Ryan Logan, board member with Voices of Note, which represents the Atlanta Gay Men’s and Atlanta Women’s choruses.

Logan works for the American Red Cross, and was actually sent to Orlando as part of the recovery response. He came up with the idea for a dual musical and conversational experience several months after the shooting.

“This truly speaks to our mission, which is changing hearts and minds through music,” Logan said.

“Forever Strong” is the first in the Noteworthy Voices series, which will twice a year bring together both music and conversation about a relevant topic.

“Music sets the stage and tells a different story. We’ll have four performances throughout the evening to highlight the various conversation that will be occurring,” Logan said. “One of which will obviously be an ‘in memoriam’ to pay tribute to the 49.”

Audience members can expect a powerful, moving experience — and tissues are recommended.

“Really, the intent for me is to pay honor and tribute to the 49 individuals who lost their lives. We want those lives to be a catalyst for good,” Logan said.

The panel includes several Orlando officials and citizens who will share how the shooting affected their organizations’ roles and visibility.

“Terry Decarlo is the director of the LGBT center in Orlando, which became ground zero for the LGBT community following the shooting. It really became the place that everybody gathered and sought any kind of emotional or spiritual care following the incident,” Logan said. “We also have Roxy Santiago … talking about the Puerto Rican community being disproportionately impacted by the shooting. To speak for many of these families, it was the outing of many of their loved ones. What does that look like and how does that play out in a Latin community that’s typically a little bit more conservative?”

Joining them are JD Castro of the Orlando Gay Chorus, which played about 50 benefit gigs in the four weeks following the Pulse shooting; Sgt. Grace Peek of the Orlando Police Department, who now drives a police vehicle that bears the names of the 49 victims; and Rasha Mubarak, who will speak about what the Islamic community faced after the attack.

“Yes, they were receiving some negative backlash,” Logan said. “They were seeing a community also rally around them and show that this was not the religion that did this, it was the act of one individual.”

The final two panelists are Felipe Sousa-Rodriguez of the Orlando mayor’s office, who was hired to run the city’s recovery efforts, and Angel Santiago, who survived the shooting.

“He was shot several times in the leg and was pulled out at the end when the [perpetrator] was shot and killed,” Logan said. “He’s got a really interesting story not only from in the club, but how he has, how it has changed him as an individual moving forward.”