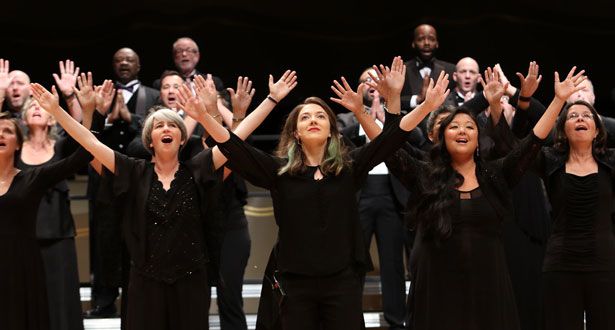 This spring, the New South sings for the Old World. OurSong, the Atlanta gay and lesbian choral ensemble, will visit Germany and the Czech Republic between May 4 and May 14.

For Robert Glor, the artistic director of OurSong, the trip is a definite high note. “This is an opportunity for us to share our music with a broader audience,” he said.

The cross-hemispheric journey began with a 2014 meeting in Ireland. At the Various Voices choir-fest, Glor “met a member from the chorus in Berlin. I was intrigued because they sing all classical choral music, a cappella, and are the same age as our chorus. It was similar enough to our repertoire that we developed a friendship.”

Glor said that when an opportunity arose to return to Europe, OurSong was ready: “We decided they would be great partners. They agreed. I attended a rehearsal and met with them this past summer and that solidified our discussion.”

Although 40 members of OurSong will make the journey, the chorus is normally comprised of 60 members. It’s a mixed group: the singers come from all the wide walks of American life. There are church singers, professional musicians, first-timers and novices, conductors and accompanists — the deeply dedicated and the recently interested. What all members share is a belief in music, and its power to create lasting bonds of compassion and understanding between performer and audience. The arrival of OurSong sounded a unique tone in the southern LGTBQ musical scene. According to the organization, OurSong has two goals: to provide high-caliber musical experiences, and to celebrate the lesbian and gay experience.

OurSong visits Berlin on May 6, and will join their voices to Canta: Re, another male-and-female LGBTQ ensemble. Following the appointment in the German capital, the Atlanta vocalists will voyage on to Prague.

Glor said OurSong wanted to “travel to an area that has not had much LGBTQ+ choral music. With a short bus ride away, Prague came onto the radar. Czechia has been slower to warm to the choral movement.” On May 7, they’ll perform with Czech’s own all-male gay vocalists, the Doodles group. Both occasions will take place inside historic Protestant churches.

After the sojourn east, OurSong will head back to Munich to take part in Various Voices, the 3600-plus LGBTQ choral festival.

“After attending Various Voices in 2014 and having an amazing time,” Glor said, “we decided we wanted to be a part of the festival again.” In Munich, OurSong will be one of five choruses from the U.S., and the only mixed voices group. Glor said that singers from Asian countries would also be in attendance.

“We have also been asked to be the core chorus for the North American Chorus,” Glor added, noting that the assembled NAC would be one hundred members strong. “I will be conducting this chorus as well.” OurSong will give a planned four performances in Munich, which racks up a six-event total for the whole European trip.

Additionally, OurSong has a regular and reliable internet presence. This includes shareable content, such as their appearance at Denver’s GALA Chorus Festival, or their remembrance of the Pulse nightclub victims.

Glor sees the May trip as part of a long-term project: encouraging the growth of LGBTQ choral groups in Southern and Eastern Europe: “I am hoping that more choral groups from those areas are founded and help influence their communities.” Glor noted that OurSong will be singing songs concerning suicide, and also perform “This Is Me” from “The Greatest Showman,” a song that “encourages love and acceptance.”

Glor added the trip was a chance for OurSong to listen, teach, and learn from the wider LGBTQ choral universe. “The European community was very open and appreciative of our performances in 2014,” he said, “and we are hoping to continue to help build bridges between our communities.”

OurSong is fundraising for their European tour. To contribute, visit their GoFundMe campaign.