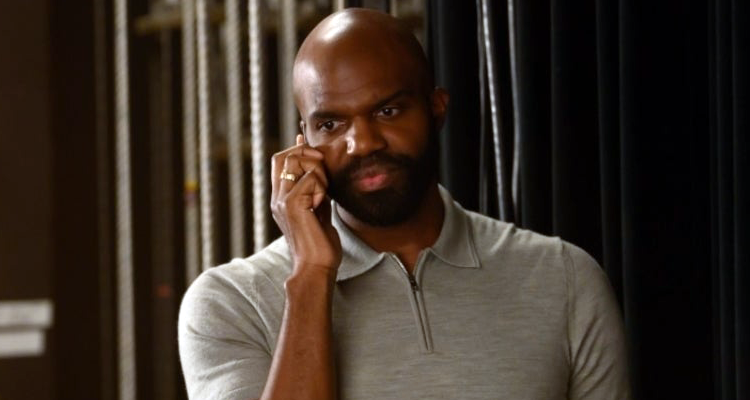 Note: Carl Clemons-Hopkins uses he/they pronouns. For clarity purposes, we refer to him with he/him in this article.

On the surface, “Hacks” is the Jean Smart comedy where the actress portrays Deborah Vance, a legendary Las Vegas comedian. Look closer, though, and it’s an ensemble series — as well as one of the most LGBTQ positive shows on television. One of the breakout stars of “Hacks” is out actor Carl Clemons-Hopkins, who was just nominated for a Supporting Actor Emmy Award for his role of Marcus, Deborah’s long-time assistant.

Clemons-Hopkins, an Atlanta native, got an email about the potential role last summer while in Chicago, asking for a quick, 24-hour turnaround self-tape audition. By fall, he was in Los Angeles filming. It was quite a surprise for him to see his character’s arc.

“I recognized from the pilot script that it wasn’t assumed that my character was straight,” he said. “It wasn’t assumed anything. As we were filming more and more episodes, I thought to myself this is a pretty great queer show. I did not expect it at all.”

Clemons-Hopkins said that every day working with Smart — also nominated for an Emmy Award in the lead actress category — was a lesson. “She is great,” he said. “Every day is wonderful. Every day is a master class. I continue to learn more every day.”

Actress Hannah Einbinder, who is bisexual and plays the character of Ava, a comedy writer newly working for Deborah, is also up for a Supporting Actress Emmy.

The relationship between Deborah and Marcus, the actor said, is one of the better business relationships she has. “I think they have a lot of real respect for each other,” Clemons-Hopkins said. “It’s possibly a mentor/mentee situation. I think at times Marcus doesn’t speak up for himself and he is all about the work. I won’t say he’s the child she never had, but definitely he has that work ethic and drive and tenacity she has.”

Marcus begins a relationship with Wilson (played by out actor Johnny Sibilly) in the first season, but the two reach an impasse due to Marcus’ obsession with work. “I am rooting for them so hard,” the actor said. “I think this is Marcus’ first relationship. He has not had that experience yet. Marcus has woken up to the idea that he does not have a personal life. It’s the beginning of self-discovery for him. They share a sense of humor and have fun together, and Marcus doesn’t allow himself a lot of joy until Wilson comes along. When they are together, that is when he is smiling and happy and he can let his shoulders down. It’s precious and sweet.”

“Hacks” has number of directors, including Desiree Akhavan, who’s queer. “It was really helpful and freeing,” Clemons-Hopkins said. “It’s so nice to film these scenes with a queer director in a queer friendly show, not trying to dramatize or explain any of those things with the character.”

Clemons-Hopkins feels it’s increasingly important to have LGBTQ representation in front of the camera and behind it: “On the one hand, there is the idea that the best person for the job should get the job. However, I think we are not quite there as a society for that to be the end all be all. I think it is important that queer artists represent themselves the fullest way they can down to the writing and directing. That is going to help us go further. I think it’s helpful we include and encourage schools of training.”

When Clemons-Hopkins was in college, if you couldn’t play straight, professors might not allow you the same opportunities. These days, he is happy to see more kinds of diverse roles available.

HBO has announced a second season for the series. The cast and crew found out two days before the season finale. All Clemons-Hopkins knows now is that the series will continue his character’s emotional development. “I am looking forward to seeing what [the writers] do with Marcus,” he said. “They left him promoted and heartbroken being comforted by his mom. At some point he has to get off the couch.”

Born in Lithonia, the actor went to high school in Snellville before he moved to go to college. He is not able to get home often but did get to bring his mother out to Los Angeles and hopes to get back to see more family now that the pandemic seems to be easing up a bit.

The actor has a small role in the new remake of “Candyman,” scheduled to be released later this year, but until the new season of “Hacks” starts production, he’s enjoying a rest period and the summertime he didn’t get to experience last year. Obviously, though, he is excited about the upcoming Emmy Awards: “I’m still in pleasant shock about the whole thing. And very grateful for the acknowledgement.”