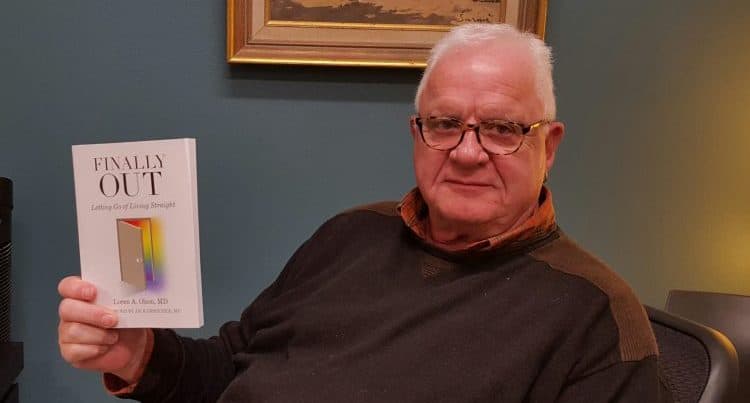 Renowned clinical psychiatrist Dr. Loren Olson will head to Atlanta this weekend for the first stop on his book tour for “Finally Out: Letting Go of Living Straight.”

Olson, who is based out of Des Moines, Iowa, came out later in life, and felt the need to do more research and provide resources for other LGBT individuals like himself. He’ll host a public talk and book signing with the Atlanta Prime Timers to kick off the book tour.

“I realized there wasn’t a lot written about the process of coming out for middle-aged men,” Olson said. “It was all about what it was like for teenagers and young adults to come out.”

Many men who come out after their 20s have families feel like they have no one to turn to.

“The most rewarding part of writing the book is hearing from people who say either, ‘Where was this book when I was going through this,’ or one person this week said, ‘You didn’t write about you, you wrote about me.’ That was kind of the intent of the whole thing,” Olson said.

The book reflects partially on what life was like for Olson growing up in the ‘40s and ‘50s — and possibly the effects that time period had on his coming out later in life — as well as the psychological concepts “of how we protect ourselves from things we just don’t want to know.”

Though the book is written from his perspective, Olson said many older women experience the same things as they come out.

“One theme that comes up repeatedly is that most of us who are in that category have a very strong commitment to family and children, and many of these people have been married. Dealing with walking away from their children is one of the most difficult parts of the process,” Olson said.

In his own journey, it was hard going from being invested as the best father possible to venturing into unknown territory. And for his generation, there’s a “good ol’ boy” mentality that goes back to religion and not wanting to rebel against what society deems normal.

“The intent of the whole thing was to write it in, not a dumbed-down fashion, but something that was written without a lot of psychiatric babble, and kind of the everyday man’s thinking,” Olson said.

Olson said his best advice is to find somebody to talk to about it.

“Shame doesn’t survive when we are in the presence of other people who accept us. I think a lot of what holds people back is a real shame-based fear of disclosing it to somebody,” he said.

At his event this weekend with Atlanta Prime Timers, Olson plans to talk about stereotypes and stigmas associated with coming out as older folks, as well as issues of aging and making sure as they age, gay and bisexual men engage rather than withdraw from the world around them.

“My thesis is kind of, come out as gay, but also come out as old, and live your life with anticipation that there’s a lot of life left to live no matter how old you are,” Olson said. “We talk about the challenges of aging all the time, but not the fact that as older men the testosterone doesn’t drive us. We’re more relaxed about things. We’re not, we can have sex in slow time and develop a physical intimacy that is combined with an emotional intimacy as well, and that’s a good thing.”

For the families of those coming out, Olson said it’s going to take time to process.

“We can’t expect our families to celebrate that decision because it disrupts their lives,” he said. “If they can get past the feeling of betrayal and to a point where each can forgive each other for the pain they have caused, they can get to a better point in their life and go on. I think my wife will tell you that she’s a stronger person now than she was before, because she was a traditional wife and she developed into a much stronger and more independent woman. That’s not to say I gave her a gift, but I think that’s the healthy way for people to come through this.”