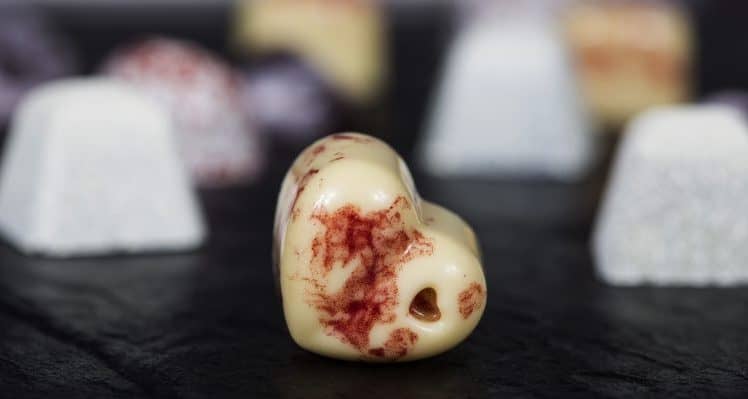 The science behind aphrodisiac food is sketchy at best, but that doesn’t mean restaurants in Atlanta aren’t turning up the sexy on some of their rumored love-inducing foods this Valentine’s Day.

According to registered dietician Elaine Magee, aphrodisiacs are any foods that aim to stimulate the “love senses” of sight, smell, taste and touch.

“No food has been scientifically proven to stimulate the human sex organs. But foods and the act of eating can suggest sex to the mind, which in turn can help stimulate desire in the body,” Magee writes in a post for Web MD. “It certainly doesn’t hurt to stack the sexual odds in your favor by enjoying foods you and your partner find sensual.”

Most aphrodisiacs’ sexual powers arose from their shape — if it looks like a sex organ, it increases desire — or the senses they inspire. For example, hot or spicy foods like chile peppers were thought to lead to heated passion, Magee said.

Being a Mexican cantina, No Más! is no stranger to the chile pepper, which causes physiological responses similar to those experienced during sex, according to the science website HowStuffWorks.

“The chipotle chocolate cheesecake, it actually mixes in two aphrodisiacs, the chipotle pepper and chocolate. We have a Mayan mocha as well, which is an espresso drink made with chocolate and chile de árbol,” Voirin said. “Chipotle pepper is a smoked jalapeño, and it takes on a new form. Lots of time it’s put in adobo sauce. The chile de árbol is a dried red chile pepper, very spicy and pretty small,”

Voirin’s favorite chile pepper dish is one of the first she created at No Más!. It’s a pollo relleno, grilled chicken breast stuffed with poblano peppers and Chihuahua cheese, drizzled with a tangy green salsa and served atop fragrant cilantro mashed potatoes.

For Valentine’s Day, she invites Atlantans to tantalize their taste buds with a tequila tasting and pairing, featuring several chile-studded dishes.

“I personally find chocolate, this is going to sound very weird, very sexual because it melts. The fact that it is solid when it is in your hand, and then when you put it in your mouth, it melts, I think that kind of captivates the senses of humans,” said Jocelyn Gragg, owner of new Chamblee chocolate company Jardí.

Researchers found chocolate contains “feel good” chemicals like seratonin, which occur naturally in the human body and are released during times of love, happiness and passion, according to HowStuffWorks. In addition to those supposed aphrodisiac qualities, dark chocolate also contains antioxidants.

“I love blood orange and they’re trending right now. We put that one in a heart-shaped mold so when you bite into it, it looks like the heart is bleeding,” Gragg said. “We make bananas foster in-house … then we puree the bananas foster into white chocolate.”

Jardí chocolates are available at Atlanta-area boutique retailers and restaurants. To order straight from the source, visit www.jardichocolates.com.

Oysters’ rumored aphrodisiac qualities likely come from their resemblance to female genitalia, though research recently found the animals contain D-aspartic acid and N-methyl-D-aspartate, two chemicals thought to help release estrogen and testosterone, according to HowStuffWorks. Whether or not oysters contain enough of the compounds to affect sex drive has yet to be proven, but that’s not stopping The Optimist from offering up a regular rotating tap of the bivalves.

Prince Edward Island varietals at this Ford Fry concept include the medium-brined Shiny Sea, clean and sweet Raspberry Point, citrus-y Lucky Limes and the slightly briny Malpeque. Virginia is represented with both the meaty Petite Beaches and the creamy, salty Chunu, and Alabama oyster lovers can rejoice that buttery Murder Point and crisp Gulf Fresh are on the menu.

For Valentine’s Day, executive chef Craig Richards invites patrons to enjoy their oysters before attending a special three-course dinner with choices such as cobia tartare, charred Spanish octopus and a shellfish tower.

Before his death in 200 A.D., physician and philosopher Galen of Pergamon recommended eating 100 pine nuts before bed, according to HowStuffWorks. The nuts, which are actually seeds of certain species of pine trees, are high in zinc, a mineral shown in some instances to increase “sexual competency” in male rats. A study done by the National Institutes of Health on the topic showed that though high doses of zinc can decrease libido, it could have some benefit on prolonging ejaculation in humans.

Though pine nuts are common ingredients in pestos used on pizzas and in pastas, ATLiens who want something a little more upscale for their sweetheart can dine inside Bacchanalia, which offers a pine nut-studded cheese course as part of its prix fixe four-course menu. The seeds are delicately plated around a tangy, ever-so-soft quenelle of Capra Gia goat cheese and garnished with beets and sauces.
Bacchanalia is located at 1198 Howell Mill Road, Suite 100, Atlanta. For reservations, call 404-365-0410, ext. 22.

According to research from Texas A&M University, watermelon has the potential to affect the body similarly to Viagra. The Southern summer fruit staple contains lycopene, beta carotene and citrulline, the latter of which has the ability to relax blood vessels like the little blue pill.

Though out of season right now, Atlantans can enjoy the fruit preserved in a glass of another Southern staple, moonshine, at Twisted Soul Cookhouse & Pours.

“We are a Southern-owned restaurant and the South is known for its peaches and its watermelon. I had not seen a watermelon moonshine out there that didn’t taste more like syrup,” beverage director Lorraine Lane said. “We wanted something more authentic.”

Though Lane couldn’t give away her secret recipe, she said the moonshine infusion features fresh watermelon and fresh jalapeño peppers, doubling its rumored love potion status.

“The jalapeño pepper is clearly distinct in there. It hits the back of your throat,” she said. “I’ve enjoyed [the watermelon moonshine] with the black-eyed pea salsa. It definitely lends itself to a spicy dish, but it’s also a nice complement to the Southern marinated fried chicken as well as the sweet tea baby-back ribs.”

Watermelon moonshine is available by the glass or as part of a moonshine flight at the restaurant, and Valentine’s diners can enjoy it alongside a decadent prix fixe menu that includes lobster canapés, a cocoa-rubbed rack of lamb and sweet orange and basil crème brûlée.