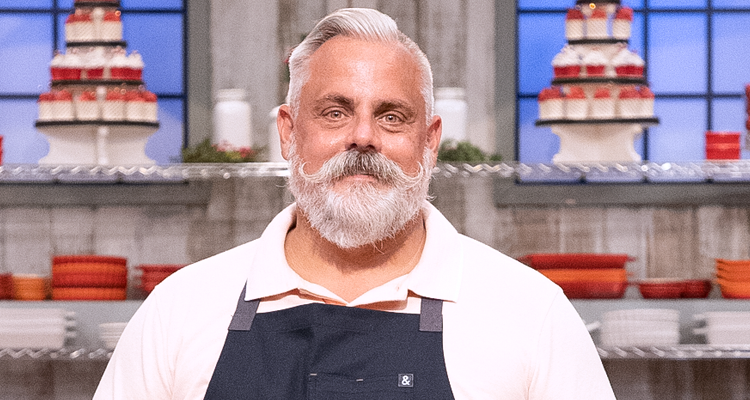 When Atlanta’s Jeffrey Gray left his job with an ad agency last year after more than 30 years (during 20 of which he was one of the owners), he wanted to move in a completely different direction. Now, as the owner of Papa Bear Bakery, he’s done so — and he’s about to bake before an entire nation as part of Food Network’s “Holiday Baking Championship.”

Gray, who is gay, is still shaking his head at how the last year and a half has transpired. After leaving his agency, he got his cottage food license and wanted to sell items such as pumpkin breads, banana breads and cookies from his home in Morningside. “Making cakes was never in my radar, nor did I think it would become a business,” he says. “A friend talked me into making a birthday cake for him and that started the ball rolling. It’s a year and a half later, and I’ve yet to sell one piece of bread. All I do is bake cakes.”

The self-taught baker has never been to a pastry school and has learned by watching a lot of YouTube videos. With every cake, though, he tries a different technique. “It’s a constant leaning experience,” he says.

Gray admits that he has been watching this type of shows for years, never thinking he’d be on one. He was at home one afternoon and got a message on Instagram from a casting director, who said he loved what he’d seen of Gray on social media and wanted to talk about the possibility of him being on a show. “I thought it was a friend pranking me, but I Googled the name and it was legit. I made the phone call and voila. There were several phone and Skype interviews, and then I had to do presentations to the culinary director of the Food Network and a few producers. I had never thought of doing anything like this, especially just starting out.”

The November 2nd two-hour “Holiday Baking Championship” premiere — with host Jesse Palmer along with judges Nancy Fuller, Duff Goldman, and Carla Hall — involves a quick bread challenge. As is the norm, each week a different baker is eliminated and the one left standing receives $25,000 and will be featured on the Food Network Kitchen app.

Gray admits that baking under such time constraints is a far cry from what he normally does at home. “It’s completely different because of all the cameras around you and the pressure of being there,” he says. “It’s the most fun I’ve had in a long time, but there is a stress level of wanting to do well. If you mess up, people are going to see it.”

He shot the series during the summer at an undisclosed location and had to keep mum on where he was. It was only last week that he was able to tell his friends and colleagues. A few people, such as his husband and parents, had to know that he would be out of town, but no one else knew. “It was very difficult. You want to tell everyone. I have a lot of friends who follow me on my pages and tell me they think I should try out for one of these baking shows.” He had to bite his tongue not to spill the beans.

Gray is one of two Atlanta contestants in the “Holiday Baking Championship,” alongside Jamaal Nettles of Inman Park. The two did not know each other before they became contestants.

The top priority during the filming was safety and maintaining social distance between the contestants, judges and staff. “Everything was handled. We had to be there for the entire time and were constantly tested and not allowed to leave the site. People on set made sure safety standards were followed.”

Many of Gray’s clients identify as LGBTQ and most of them have come through word of mouth. One of his specialties is a Chocolate Blackout Cake with Three-Chocolate Cream Cheese Frosting. “People love chocolate — it will always sell,” he laughs. Working at his home can be limiting, but he is learning how to best make it work. He’s not sure what the national attention will mean for him, but from what he has learned from others, he can expect to be even more in demand the next few months.