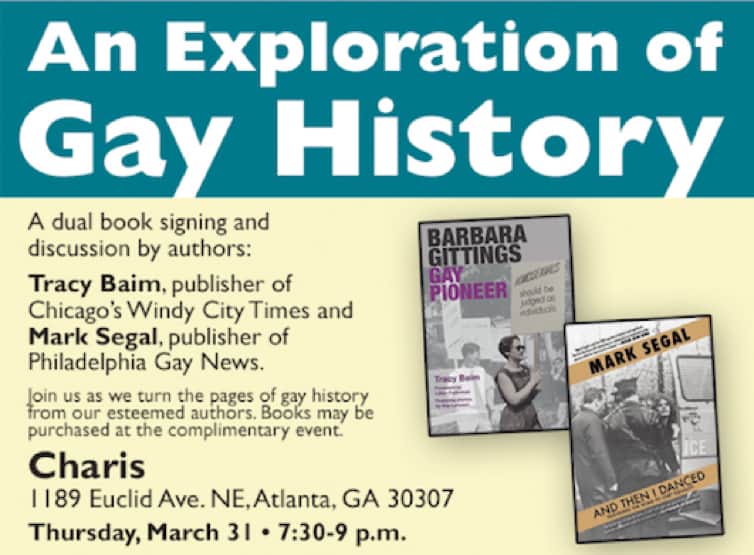 The significance of the American gay rights movement and its many influential leaders and organizations will not be forgotten as long as authors Tracy Baim and Mark Segal can help it. The pair are scheduled to appear in a dual book signing and discussion at Charis Books at the end of the month in support of their latest works; “Barbara Gittings: Gay Pioneer,” a biography on the life and activism of the pioneering lesbian activist by Baim; “And Then I Danced: Traveling The Road To LGBT Equality,” Segal’s critically-acclaimed memoir chronicling his journey from meager beginnings in Philadelphia to his involvement in New York’s historic gay equality movement.

In a world where LGBT Millennials reap the rewards of decades of activism by countless individuals, many of whom remain nameless and their accomplishments often unacknowledged, Baim and Segal’s books are both timely and necessary.

“The shame of it all is that our movement, like the civil rights movement and the women’s movement isn’t taught to the next generations,” Baim tells Georgia Voice.

“If you were to ask the average gay person in a bar tonight ‘who are the top five gay heroes?,’ they’re most likely gonna be modern gay celebrities or sports figures.”

It can almost be guaranteed that their response wouldn’t be Barbara Gittings, despite being known as the mother of the LGBT civil rights movement or her willingness to “take on whole systems that needed to be changed, like the American Psychiatric Association or the American Library Association,” says Baim who in addition to penning Gittings’ biography is also the publisher and executive editor of Chicago’s Windy City Times.

As for Segal, whose memoir reflects his contributions to the burgeoning modern gay rights movement of the late ‘60s that began with groundbreaking groups like Gay Liberation Front and his involvement in the Stonewall Uprising, the activist and publisher of Philadelphia Gay News remains fiercely outspoken and committed to preserving and sharing LGBT history.

“Before Stonewall, there were literally only 100 hundred activists nationwide who were out. We took a movement of 100 people and created 15,000 in one year,” says Segal.”

Known for his infamous “zaps” targeting mainstream media outlets and political figures for their inaccurate portrayal of LGBT people, Segal tells Georgia Voice that today’s activist have “become so complacent that we just expect our rights to be delivered to us on a platter.”

So whom would Segal “zap” today?

“If I lived in Washington D.C. today, I would be zapping the Republicans more than you can imagine; Paul Ryan wouldn’t have a night’s sleep and neither would (Mitch) McConnell.”