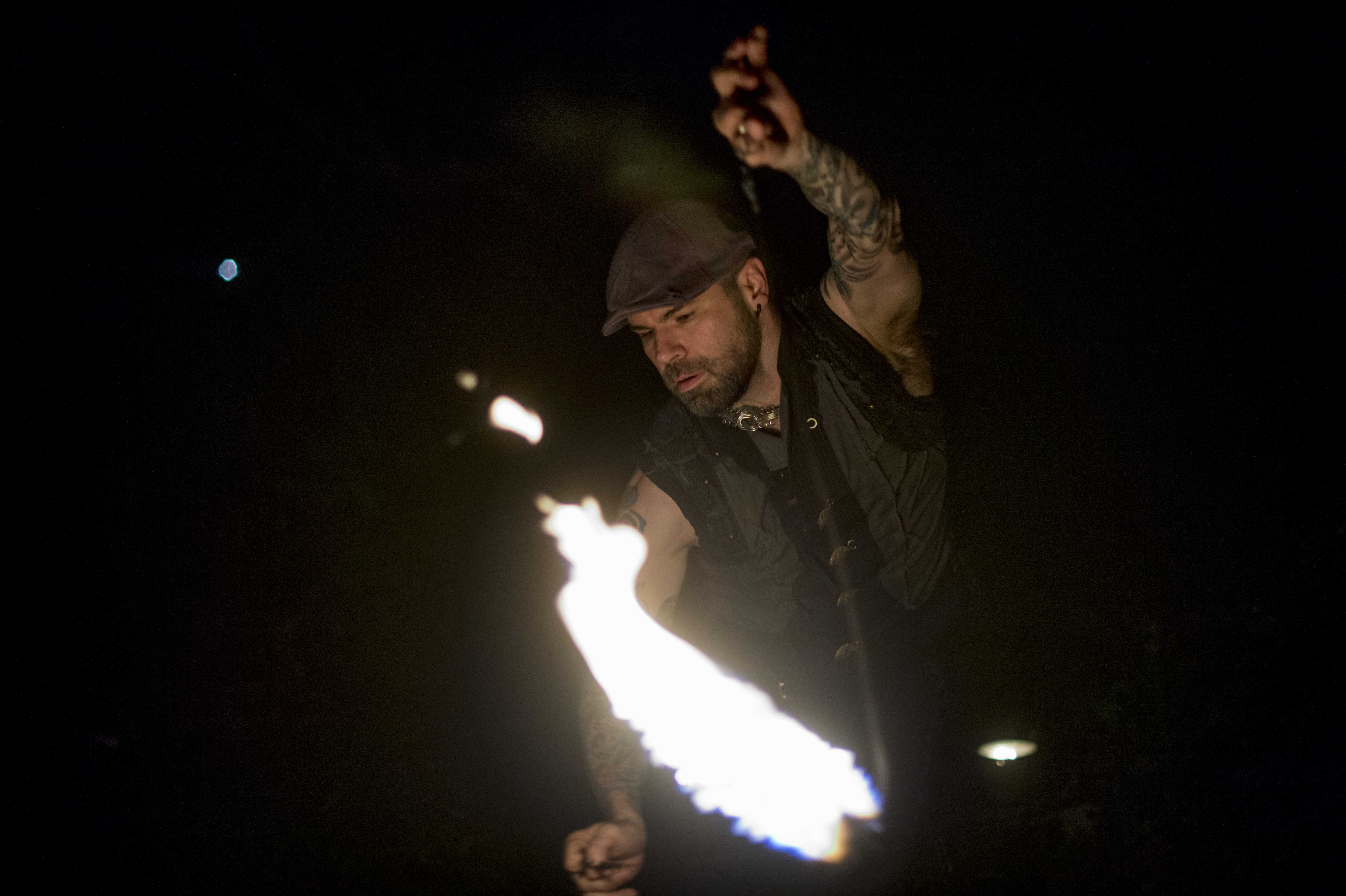 By day he’s a librarian at Georgia State University. By night, he dances with and swallows fire.

Eric Reber, 43, has been fire dancing for six years as a way to get out- side the focus and detail of working as a digital assets archivist and set free his creative and adventuresome self.

“It’s like a big release,” he says. “I get to step outside myself.”

A student of martial arts, Reber used a fire staff as his primary prop.

“At a certain point you say to yourself, you know, you can set that on fire,” he says. “And so I did. And it’s been a blast ever since.”

His passion and respect for fire and the art of fire dancing and performance led him to start a business, Balefire, in 2010 with friend and fellow performer Alexandra Mitchell. The two met while taking a belly dancing class.

Together they have worked with some notable clients, including the Savannah Zombie Walk, Georgia Special Olympics, Run for Your Lives—Zombie 5K, Wedding One Bridal Expos and Tiki Hut—Hilton Head Island.

“When we started the business it’s because we decided we wanted more fire. And it’s been busy every weekend since. It can be very demanding,” he says.

“Woad is the blue body paint that the Celts used when they went to war. I have mostly blue tattoos, which is why I chose it,” he says.

BURNING BALEFIRE
Balefire is an old pagan term that means bonfire, Reber explains, and is linked with the May Day holiday, also known as Beltane, traditionally celebrated on May 1. The Gaelic festival can mark the beginning of summer and through rituals of music and dancing offers protection from harm.

As fire dancers, Reber and Mitchell strive to delight their audiences with the magic of flames and movement, but sometimes what is seen is not always as romantic and as it appears. Concentration is crucial to ensuring crowd pleasing dances and sometimes the fire exerts its authority.

“There are the mild singeings here and there,” he says. “And I’ve burnt my beard pretty dramatically. But we are very focused and always have safety personnel close.”

“We take every precaution,” Reber stresses. “There’s an element of risk. You have to have enormous respect for fire. I’ve seen some horror stories.”

“It’s interesting. You’re essentially stuffing a flaming metal rod in your mouth. I do a lot of rinsing out of my mouth immediately afterward,” he adds with a laugh.

The props are set on fire using a fuel that is usually a hybrid of liquid paraffin and white fuel, better known as Coleman camp fuel. Together, the two make a mild, odorless fuel and a clean burning source.

“They call it flow arts,” Reber says of fire performance. “You just go into a flow when performing. I’m cognizant of my surroundings and hyper aware of people around me.”

Reber’s boyfriend is also a fan of the art and is on the safety crew. He’s good with a needle and thread and tailors many of the outfits worn by Reber.

“The key for costuming and fire performance is the material used. We use nothing but organic, silk, cotton, wool, hemp. You don’t want to wear polyester or rayon because they will melt,” Reber says.

Throughout the summer, Reber and Mitchell as Balefire are constantly busy traveling the Southeast to perform at private events or at large festivals.

“We take a lot of joy in what we do and like to think we bring that to any event we do,” Reber says.

“It’s dramatic, exciting and infectious. And we are always happy to share how we learned what we do.”