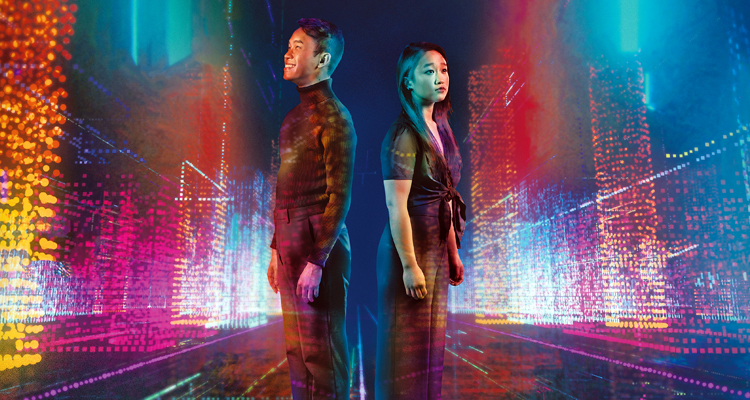 Behind the Scenes: “Maybe Happy Ending, The Musical!”

Hyping up the upcoming premiere of the “Maybe Happy Ending the Musical,” Alliance Theatre held Behind the Scenes on Jan. 7. Director Michael Arden, composer Will Aronson and lyricist Hue Park discussed the musical with podcast producer Myke Johns to a full house.

“Maybe Happy Ending” is a futuristic love story in Seoul, Korea. Two outdated helper-bots, Oliver and Claire, live in a robots-only housing complex on the outskirts of town. When they meet, they have a surprising connection that challenges what they believe is possible for themselves, relationships and love.

The musical is a tale of two cultures conceived by Will Aronson, American book writer and composer, and Hue Park, South Korean book writer and lyricist. The script has two versions: one in English and one in Korean. After Park wrote the song lyrics in Korean, both versions were written simultaneously by Aronson and Park.

Inspiration for the musical came from a song that Park kept heard at a coffee shop- Everyday Robots by Damon Albarn. Park felt like people were turning into robots, deepening their relationships with their electronics rather than each other.

The debut of the musical took place in Seoul, Korea in 2016, winning six Korean Musical Awards including Best Book, Lyrics and Music. The English-language version was awarded the 2017 Richard Rodgers Production Award. This will be the musical’s first American debut.

The American musical is directed by Michael Arden, who is a two-time Tony Award nominee for musicals “Once on This Island” and “Spring Awakening.”

Producer Jeffery Richards suggested to Arden that he was the right person to direct this musical. Although he was skeptical, Arden listened to the soundtrack with his husband, Andy Mientus, the associate director for the musical, while driving upstate and instantly fell in love with it.

When searching for an artistic home, Arden heard of the Alliance Theatre’s great work. He met with creative director, Susan Booth, and it was like “a great first date.”