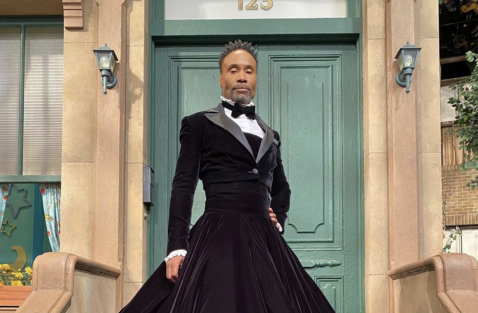 Billy Porter, whose gender-defiant fashion choices continue to trigger conservatives every time he makes a public appearance, has found himself at the center of yet another controversy – and predictably, it springs from the knee-jerk reaction of a Republican politician to news that the Tony- and Emmy-winning “Pose” star made a stop on “Sesame Street.”

The latest storm-in-a-homophobic-teacup started when the iconic children’s program shared on-set photos of Porter to social media on January 30. The photos, taken while the out (and outspoken) star was filming an appearance on an upcoming episode of the show, reveal him dressed in the velvet tuxedo gown designed for him by Christian Siriano – a look that became instantly iconic when he first debuted it at the 2019 Oscars.

The photos prompted an immediate backlash from Arkansas state senator Jason Rapert, who took to Facebook for an outraged post.

“Do you approve of your taxpayer dollars being used to promote the radical LGBTQ agenda?”, the 47-year-old Republican wrote, going on in the comments to threaten that he could sponsor a bill to cut state funding for PBS, which airs “Sesame Street.” The show, which is in its 51st season, is now by HBO, but is still aired nationwide by affiliates of the public television network.

“Taxpayer funds should not be used to try and manipulate young children with the political agenda and worldview of LGBTQ activism,” wrote Rapert, in a follow-up post. “Political interest groups can pay for their own messaging and do as they please, but the hardworking taxpayers of America DO NOT have to pay the bills for your efforts. I object to PBS and [local PBS affiliate] AETN rebroadcasting any LGBTQ activist programming using public funds. Not the right time or the right place.”

Shortly thereafter, a petition was launched by the pro-life site LifePetitions calling for the removal of Porter’s appearance from the upcoming show, accusing “Sesame Street” of trying “to sexualize children using drag queens” and demanding that the 10-time Emmy-winning series, “Let children be children, and stop trying to force this corrupting and dangerous influence on the youth of America.”

Porter was having none of it. Speaking to Page Six at an anniversary party for Saks’ L’Avenue restaurant in New York, the LGBTQ superstar snapped back at the critics, “If you don’t like it, don’t watch it.”

He went on to question why people would make a mental association between his dress and “perverted demon sex,” pondering, “Like, what about me singing with a penguin [on the show] has anything to do with what I’m doing in my bedroom?”

“The really interesting thing for me,” the history-making actor, singer, and activist added, “is that that’s what it’s all about when it comes to LGBTQ people — the first thing everyone wants to talk about is how we having sex.

“Stay out of my bedroom and you will be fine — that is none of your business.”