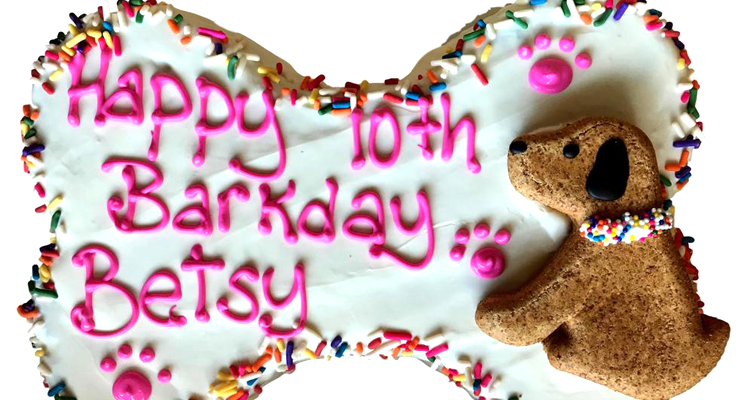 LGBTQ individuals adore their pets, and some want to show their affection from time to time with special treats such as cakes and birthday parties. A number of Atlanta locations provide those kinds of amenities.

Taj Ma Hound Bakery for Dogs, located in the neighborhood of Oakhurst in Decatur, is one of the chief area locations for specialty treats. Although she has always offered birthday cakes, owner Krista Aversano feels her bakery has really taken off in the last few years. In the early days of running the store, she might have created a cake every three months or so, but these days she is much busier with them, selling roughly 100 a week. She says that since the lockdown began, birthday cake sales have exploded as more and more people have taken to adopting dogs, and she expects next year to be even more robust. Said cakes are only equipped for canines, however. She tried to create cakes for cats, but it didn’t work out. “Cats are too picky,” she laughs.

Her cakes are made with natural ingredients. Her top sellers are a customizable “Happy Barkday Cake” with “gourmutt” bones, both in a blue and a pink, and a carob brownie bone shaped cake. Also popular is a “Yappy Birthday” cake with yogurt frosting and a “pawstry” gift box with assorted popular goodies—cannoli, peanut butter cups and peanut butter and yogurt filled sandwich cookies. The cakes have a one week shelf life at room temperature and are best stored in a refrigerator or freezer. Items can be purchased at the store and are also available for shipping. In Aversano’s opinion, dog birthday cakes are cherished equally by LGBTQ and non-LGBTQ pet owners. “You either love your pet or you don’t,” she says.

The staff has cakes on hand, but can whip up custom ones as well, since they only take a few minutes. “We get a lot of people who just walk in last minute,” she says. “Other people come in every day for muffins. We do a little bit of everything here.”

Taj Ma Hound used to offer birthday parties, but no longer does.

Piedmont Bark, now in its 18th year, offers dog boarding, day care and grooming, as well as special treats. Owner William Campbell, who is gay, says that treats are popular all through the year. Holidays are big, though, such as New Year’s, Saint Patrick’s Day, Cinco de Mayo, Easter, and of course, Halloween and Pride. The food base remains the same, but what differs is how the treats are decorated. Outside of cakes, Campbell’s most requested food items are bags of carrots and peanut butter treats. They are smaller in size so that a small dog can eat them as well as a large dog. Ironically, Piedmont Bark uses Taj Ma Hound—which Aversano launched in the Piedmont Bark lobby—for all its baked goods.

Campbell’s patronage is diverse. “When we first opened, in Midtown, our clientele was more heavily LGBTQ, but over the years Midtown has changed and gotten more integrated. It reflects the diversity of Midtown now.”

What sets Piedmont Bark apart from others is its three separate tiers of birthday parties. A birthday shoutout package ($30) includes a day of day care, a shoutout on social media, a bandana and a take-home treat, while a birthday party package ($50) adds a play party with selected canine friends. The store’s ultimate birthday celebration is the deluxe party package ($85) which offers a take-home birthday cake and various treats for the birthday boy or girl. Parties have to be reserved two weeks in advance.

Piedmont Bark hosted its first birthday party in 2005. They no longer have the space to shut down the facility for parties, so instead they do them during the day, alongside day care. “The benefit of doing it during the day is that you know the dogs there are going to get along,” Campbell says. He himself is a fan of dog celebrations—and some can be lavish. He himself arranged a soiree for Bobby and J.R., his two dogs named after characters from “Dallas,” where he had cake, an oil well, and both patrons and dogs in cowboy hats. Another patron had a 15-year anniversary party for a dog who wasn’t going to be around much longer and went all out to celebrate.

Other area locations worth checking out are City Dog Market in Brookhaven and Dog City Bakery in Marietta and Sandy Springs, which offers a gluten-free, moist, delicious 9” x 6” bone shaped cake and a “woofcake,” a cross between a muffin and a cupcake.