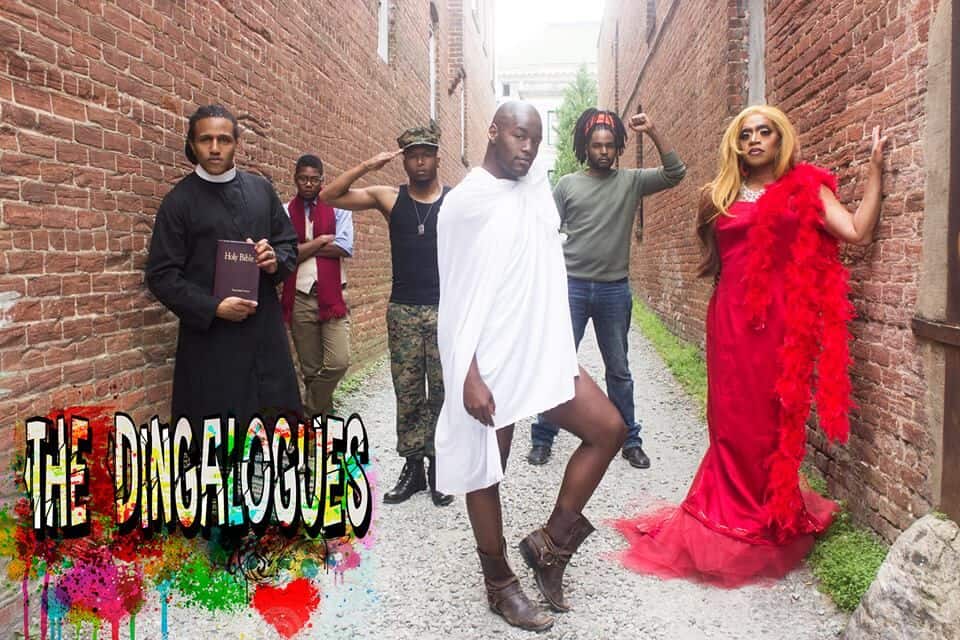 They may be distinct in their personalities, but the six characters in the new play “The Dingalogues” share the common characteristic of being both black and gay – and dealing with the struggles that presents. The stories of social activist Malik, self-tormenting pastor David, combat veteran Jonathan, butch queen Free, drag queen Melody Mirage and transgender man Parker come alive in the piece. We recently caught up with cast members and writers John Collins and Erik Dillard (who also directs) to tell us more about the new show, which Dillard laughingly calls “‘The Vagina Monologues’ after black gay men,” and the journey to bring it to stage.

Hi guys! Tell us a little about how “The Dingalogues” came about.

Erik: There was a poetry event in January and I saw John and Larry Walker and their pieces seemed kind of conversational. John and I talked after about doing something that was more LGBT-friendly and decided what lanes we wanted to go into, what walls we could break down in terms of taboo. We started then. The other writers are Larry, Rigardo Rush and Derrick Tinneal and we all play the characters we write about.

Did you bring a lot of yourselves to this?

John: It is fiction, but in each story we have brought a big chunk of ourselves.

Tell us about your individual characters.

John: Jonathan is hyper masculine. A typical military, I’m fighting for my country, all-American dude. He understands Don’t Ask, Don’t Tell is prevalent but is comfortable with his sexuality. This is his first time abroad, first time on his own. He is naïve about a lot of things, discovering who he is and this great big world. He brings a guy back to his room and winds up getting raped.

Erik: I am Melody. I have always loved drag queens but never thought I would do it. But there was a television show pilot where I was asked if I would play a drag queen. I went ahead and did it. A character really did develop and I have been doing that for a year.

Why is this show important?

John: These stories need to be told. It speaks to the harsh reality of why being LGBT isn’t a choice. People don’t look at what it means to be black and gay, what we go through as we come to terms with our sexuality. The character of Melody is celebrated under the lights, but what is she going through? What is the character like when she becomes Melvin and is at home alone? This takes you behind the scenes, having parents who can say, “You don’t look or act gay, why can’t you flip the switch,” and why we can be pushed out of our homes when we are young.

What was the biggest challenge?

John: Revisiting the experience in the military. I had to lock that away and suck it up. I couldn’t tell anybody. I couldn’t talk to my superiors. It caused me a lot of depression. Writing Jonathan, a lot of anger came out. I had to figure out these emotions. I had to separate myself from this and be able to speak about this.

Erik: It was hard to cast someone as the transgender character who felt comfortable and confident enough to tell that story well.

Are there plans to take this to another city?

John: Right now we are concentrating on Atlanta, but we would love to create a buzz and tour.