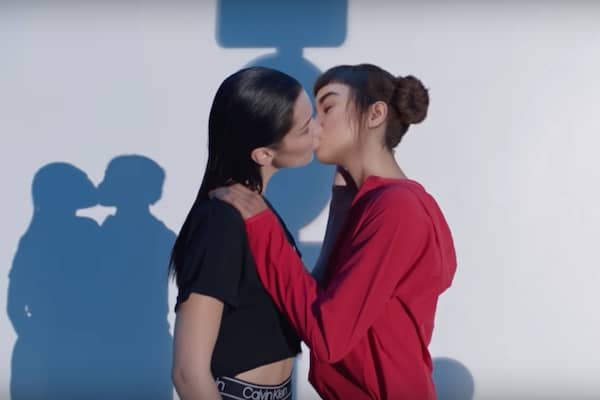 Calvin Klein has issued an apology to the LGBTQ community after receiving backlash for a new ad featuring model Bella Hadid and robot model Lil Miquela.

In the ad, Hadid and Miquela share a lingering kiss. Miquela is a CGI character who boasts more than one million followers on Instagram.

Some people called out the ad for queer-baiting and using a same-sex kiss to gain attention for the brand.

who is gonna tell Calvin Klein you're supposed to wait until June for your tone-deaf queer-bait ad campaigns!! lil miquela and bella hadid out here smooching two weeks too early!!!

1. Stop using lesbianism to sell your clothing.. we’re not garnish for men

2. Should have been me

"Life is about" what? This is a total queer bait …
Bella Hadid kisses Lil Miquela in new Calvin Klein commercial … https://t.co/FYbQMvoPwY

Calvin Klein responded to the criticism with an apology.

“The concept of our latest #MYCALVINS campaign is to promote freedom of expression for a wide range of identities, including a spectrum of gender and sexual identities. This specific campaign was created to challenge conventional norms and stereotypes in advertising. In this particular video, we explored the blurred lines between reality and imagination,” the company wrote in a statement. “We understand and acknowledge how featuring someone who identifies as heterosexual in a same-sex kiss could be perceived a queerbaiting. As a company with a longstanding tradition of advocating for LGBTQ+ rights, it was certainly not our intention to misrepresent the LGTBQ+ community. We sincerely regret any offense we caused.”

Here at CALVIN KLEIN, we welcome all types of constructive feedback from our community. We see your comments and we appreciate them. We'd like to offer our thoughts in response to comments on our campaign video featuring Bella Hadid and Lil Miquela. pic.twitter.com/OIcIekyR9K