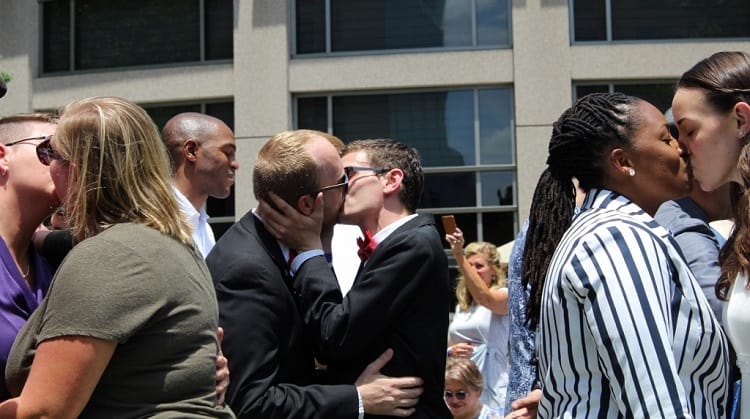 40 to 50 couples exchanged vows in a mass wedding ceremony on Sunday at the InternContinental Hotel in Buckhead, two days after the U.S. Supreme Court struck down same-sex marriage bans nationwide.

Smith started planning the event in April and yes, he knows what you’re thinking.

“Everyone’s going to say, ‘Umm, do you have a crystal ball?’ I say no I don’t have one but I believe in our president and I do believe in the Supreme Court,” Smith told Georgia Voice. “They will rule for love. Love wins.”

Georgia Equality executive director Jeff Graham was in attendance and read from Justice Anthony Kennedy’s majority opinion, and former MLB player Billy Bean was the officiant. Bean, who was in Atlanta last year for “Out in the Stands” at Turner Field, came out as gay after retiring from the game and now serves as the league’s ambassador of inclusion.

Bean choked up as he mentioned his late partner and how he would have loved to have seen the day when same-sex marriage was legalized across the country.

“I feel a happiness from my gut down inside and I see the joy that people are feeling,” Bean said after the ceremony. “I think that gets lost in translation when people are fighting about something on the news. The absolute desire just to say man, I found my partner and I just want to live my life with them. And I guess until that right is taken away from you, or people try to do that, that you can’t understand what an honor and a privilege it is.”

Adam Zollinger and Troy Caldwell were married in Chicago and took part in the Sunday ceremony to renew their vows. And they had a special guest with them—their two-year-old son Nathaniel, who they have fostered since right after he was born and whose adoption just came through two weeks ago.

“Today was great because we decided to go through the adoption process for him instead of having a real wedding for ourselves,” Zollinger said. “This just means so much because our son is here. We’ve been together for 12 years and we finally get to celebrate our love and it means a lot.”

Check out a video below of the vows and big moment, plus a photo gallery documenting the day.