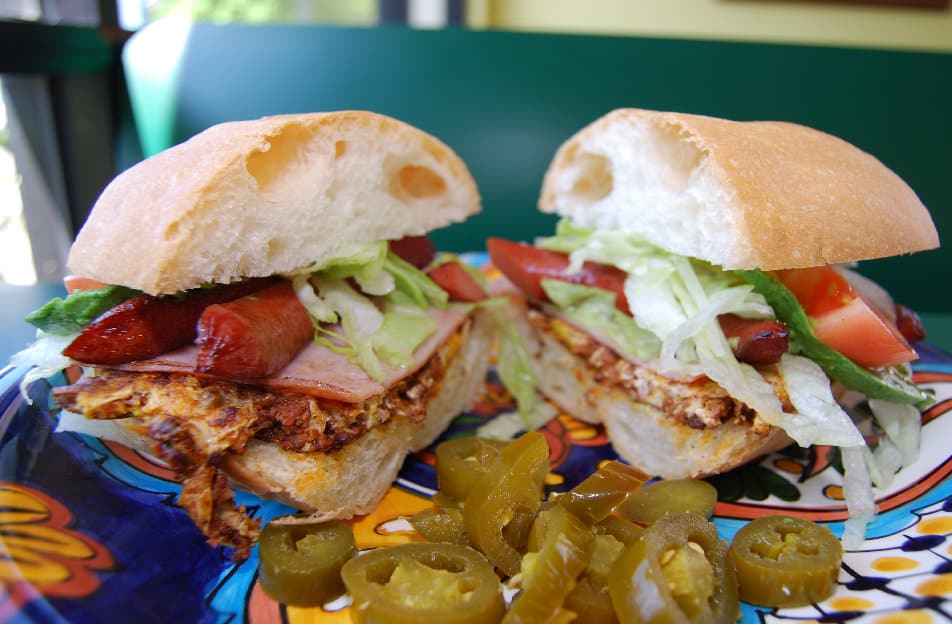 A couple of years ago, Anthony Bourdain—the self-styled “badass” of foodie TV—came to Atlanta to tour the city’s hotspots. Like him, I can’t resist cheap, spicy, and kinda seedy. So, among the 20 places he mentioned the standout for me was El Taco Veloz.

We live in a city swamped with taquerias, but Veloz hovers at the top of my list. Ever since they opened, I’ve been in love with the chile-relleno burrito—two cheese-fillled poblano peppers wrapped in a big tortilla. You can—a la Moe’s—add all kinds of crap, but please don’t do that. If you gotta have something, let it be some of the beans, along with cilantro and a green sauce. (You can also get tacos made with the chiles).

During my most recent visit, I pigged out and also ordered a carnitas taco, a chicken tamale, and perfumy, velvety rice pudding. The tamale was maybe the best I’ve encountered in an Atlanta restaurant in years—freshly steamed in a cornhusk, redolent of sweet corn meal, and full of juicy meat. Not a patch of dryness. They aren’t on the main menu. They’re buried among the side dishes.

The menu is extensive. There are also breakfast dishes, tortas (sandwiches), fried and grilled fish, and plates. Please don’t fail to splash around in the salsa bar. The range of tastes will teach you how complexly sharp your bashful tongue can be. Expect to spend next to nothing, seriously.

When a friend recently suggested we visit Ssam Burger on the Westside (2702 Defoors Ferry Road, 404-609-5533, www.ssamburgeratlanta.com), I kinda groaned. I’m getting really, really tired of the Korean fast-food fusion thing. Make a sandwich or taco, dump kimchi on it, and supposedly you’ve created an amazing cross-cultural dish.

Fortunately, Ssam Burger, which opened about a year ago, does it creatively. The five burgers all feature intensely flavorful Angus beef, mainly marinated in Korean barbecue sauce. Then the kitchen goes a little deliciously nuts by, for example, topping the patty with blue cheese, shiitake mushrooms, and chimichurri sauce to create the Kenoko burger.

How about an Aloha Burger? You get the barbecued patty plus, bacon, caramelized pineapple, and sriracha mayo. The Saigon Burger impersonates the popular Vietnamese banh mi sandwich, borrowing its lemongrass, pickled carrots, daikon and cucumber. The most popular choice seems to be the Kimcheese—the barbecue-marinated patty topped with provolone cheese, a kimchi relish and Ssam sauce that barely burns the tongue but is faintly, mysteriously sweet.

The restaurant also offers chicken and veggie burgers. There are a few classic rice bowls. The only one I’ve tried featured spicy pork with shredded lettuce and grilled onions and carrots. (I ordered brown rice instead of white for $1 extra.) I can’t really recommend it. The pork was tangy-hot, fresh off the grill, but the bowl was overall monotonous. I know the lettuce is intended to break up the texture and heat of everything else, but it doesn’t do the trick. In fairness, this is characteristic of the cuisine in my experience. Vietnamese noodle bowls, by contrast, include fresh and pickled cold veggies along with the grilled meats.

Don’t worry about your delicate palate at this restaurant. Even the kimchi is weirdly mild. Every time my friends and I asked about a dish or asked for a sauce—like sriracha mayo for our fries—the server worried aloud that it would be too spicy. No. Like so much in our city, it wasn’t nearly spicy enough. But we’re getting there.