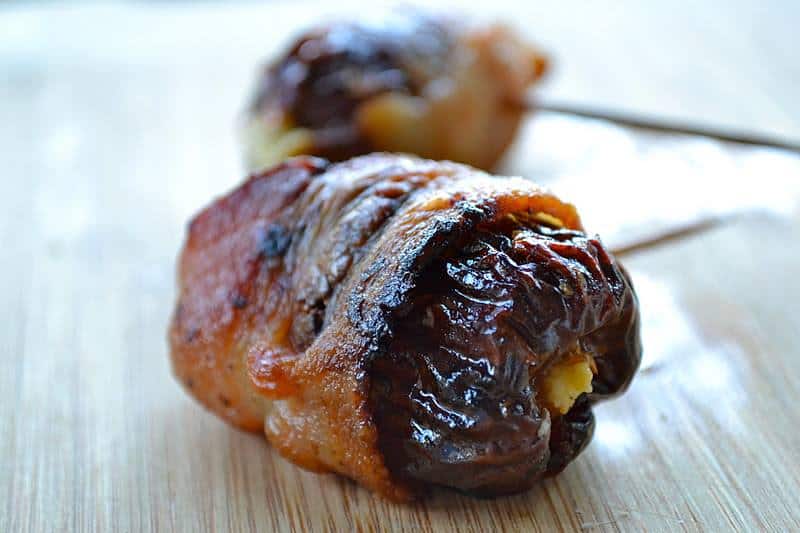 Bacon wrapped dates with goat cheese, almonds, and a Dijon bourbon are on the menu at Gravy. (via Facebook)

Remember the Cockpit? No, you probably don’t. The gay bar, which closed in November after three years, was in Grant Park, not a mile from my home, but light years from the Midtown scene. The sleazy name was a jokey pun, although the targeted customers really were the kind of bros who hang out on Scruff. Of course, it’s hard for a bar to live up to the prolific hotness of online cruising, even though it’s 98 percent fantasy. As we all know, reality never lives up to fantasy.

But I digress. A new restaurant has opened in the Cockpit space. Gravy (465 Boulevard, 404-343-2450, www.facebook.com/gravyatlanta) is a sleaze-less Southern-style restaurant and pub. The dining room centerpiece remains Cockpit’s large bar, with tables placed along the rather narrow space on one side and an open space in the rear. There are pub tables by the front window. When the weather warms up, a patio will considerably enlarge the space.

The restaurant had a fitful start, opening on Dec. 20 and then closing soon after because of “kitchen problems.” Then it reopened a week or so later. I visited about a week after that with two friends and we had a good meal. Mysteriously, we also smelled a blast of very strong cologne every now and then throughout our meal. We could not target the source. Perhaps the place is haunted by a twink who was banished from Cockpit.

The menu is short, at least for now. Starters, mostly meant for two, often blend sweet and savory flavors typical of Southern cooking. For example, we ordered one of Medjool dates stuffed with goat cheese and pecans drizzled with a bourbon sauce. Despite a dash of Dijon mustard in the sauce, it was sweet enough to serve as a dessert.

Barbecued turkey ribs—totally new to me—were glazed in a slightly piquant barbecue sauce and served over strongly peppery arugula. Fried oysters, perfectly crispy and topped with a bit of Vidalia onion relish, were served with fat white beans in a vinegary sauce.

Entrees are super-filling and, like the starters, dabble in the sweet and savory. My huge piece of pork tenderloin, pink and juicy, was served over sweet-potato puree and topped with compote of dried fruit, including apricots, cranberries and apples. I grew tired of fruity pork dishes many years ago, but the tang of dried fruit tempers cloying sweetness.

Shrimp and grits with Tasso gravy and spicy sausage exemplify the Low-Country classic. Our final entrée: pan-roasted red snapper. I loved it, but not so much the blood-orange glaze. Blood orange has become as ubiquitous as, um, blood.

We were way too full to deal with desserts. The restaurant offers an assortment of cakes provided by an outside bakery.

The scene? Mainly gay when we visited, but it’s bound to attract plenty of my metrosexual neighbors. Problems? The usual just-opened ones. The service was bumpy, but the servers were hot. I admit I was very surprised when I learned a restaurant was opening in the Cockpit space, because the kitchen is so tiny. It’s fairly amazing that it turns out dishes as smoothly as it does, but our starters did arrive sequentially and the entrees were not uniformly hot.

Don’t let that discourage you. I’m already planning a return visit. I do suggest making reservations. It’s a smallish space and will fill rapidly once word gets around.