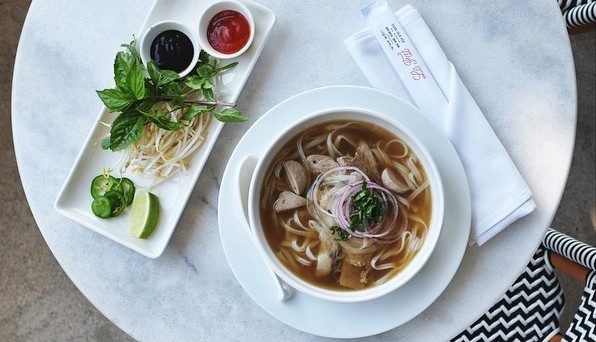 Not a week goes by that I don’t dine on Vietnamese cuisine, my absolute favorite in the world. So I was excited, to say the least, when Guy Wong, owner of the renowned Miso Izakaya, announced he was opening Le Fat (935 Marietta St., 404-439-9850), a Vietnamese bistro, in West Atlanta.

It seemed a perfect fit. Wong’s menu at Miso is an elegant, creative tribute to Japanese pub dishes, but he calls on all manner of Asian cuisines. This new restaurant, one of several others Wong plans to open, offers mainly classic Vietnamese dishes in an explicitly French context. That’s not as unusual as it may sound. The French occupied Vietnam, which would later be subdivided into several nations, for nearly 100 years. At that time, the French called the area Indochine, because it was bordered by India and China. That should give you an idea of the vast range of Vietnamese culinary influences.

When I say the context is French, I’m talking mainly about the restaurant’s gorgeous décor. The space was formerly occupied by Yum Bunz, Wong’s first attempt at a second restaurant. It fizzled quickly, and the space was redone to feature walls painted with flowers and birds. There is a counter with French pastries and a zinc-topped bar. You might hear a French diva crooning. Think of Indochine, the spectacularly popular restaurant in New York that became Bianca Jagger’s favorite place to hang out with the beautiful people in the 1980s. That’s where I got my first taste of haute Vietnamese cuisine, despite my lack of beauty.

What is it that is so lovable about Vietnamese food? I like the comparatively healthy mix of the raw and the cooked, the crunchy and the creamy, and the slightly sweet and bitter. It typically features meats with rice or noodles and, of course, the favorite dish of many people is pho, the intensely rich soup served in many Vietnamese-owned restaurants along Buford Highway.

And that raises a question: is the food at Le Fat any different from Buford Highway’s? Honestly, not so much. The big draw here for many people, despite the significantly higher prices, is the convenient Midtown location, the elegantly hospitable décor, and the French éclat. In other words, it doesn’t intimidate the many people who still fear Buford Highway, where English is the second—or third or fourth—language.

I’ve sampled nothing on the menu that I can’t recommend. A particularly and predictably popular dish is the “Shaking Beef.” That’s chunks of Angus steak with lettuce, caramelized onions, and lettuce in jus vinaigrette. Squeeze a lime slice over the little bowl of salt and just barely dunk the tender beef in it. It’s delectable—better than most in town—but it did make me nostalgic for the same dish made with filet mignon at the much-missed Nam in Midtown Promenade (it also emphasized the French influence).

The pho, long ago perfected by Wong, remains addictive. Of course, the weird—tripe, for example—doesn’t appear in the bowls here. They are afloat with flank steak, brisket, and succulent little meatballs, as well as noodles. A plate of head-on prawns sautéed with chili oil and onions reverberates with the kind of crystal-clear flavors I love about Vietnamese food. Yes, you must suck the heads. On the other hand, I didn’t much care for the beef stew. If you dig soy sauce, you’ll like it, but I’ve never been a fan of intense brown sauces. A startling dish with reportedly wonderful flavors is the whole flash-fried fish with crispy ginger, garlic, and Thai peppers.

Starters, like classic spring and summer rolls, are the usual. A salad of green papaya, mango, apples and bits of peanut brittle is sharable and altogether refreshing. It’s not much different from the famous version at Co’m on Buford Highway. The rice noodles (bun) topped with your choice of meats or shrimp are my favorite lunch at other restaurants around town. You can get the same toppings on rice.

Lest you question, on the basis of the restaurant’s name, whether Vietnamese food is healthy, Le Fat takes its name from Guy Wong’s young son, Wong Wen Fat. Yeah, really.