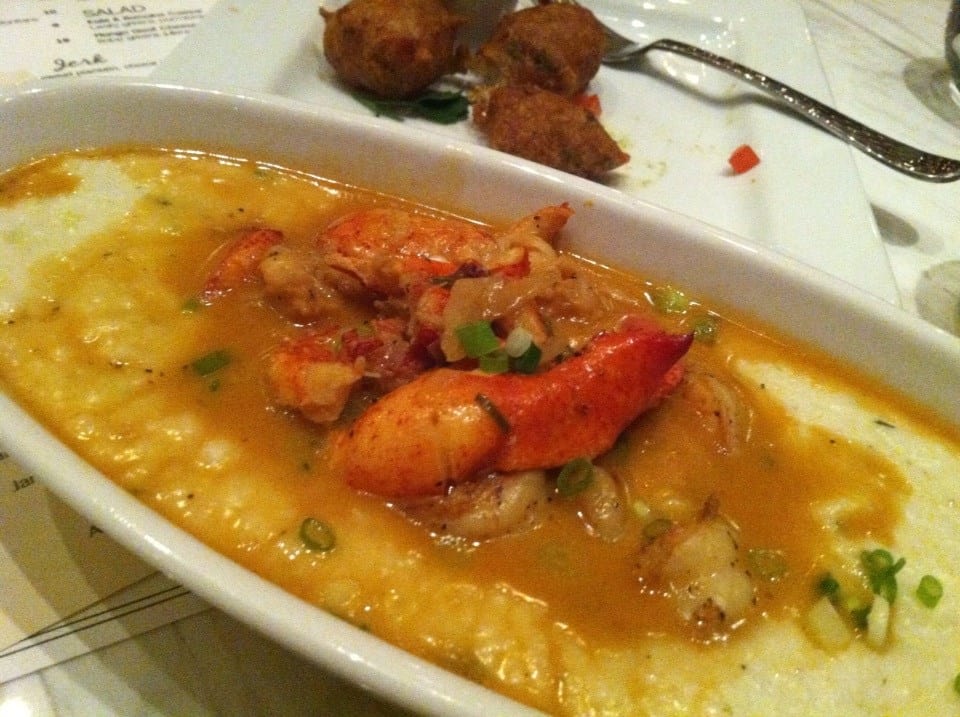 Spring has arrived. We open our windows. We join the strolling crowds in Piedmont Park. Baby birds break out of their shells. Pollen allergies, alas, turn us into sneezing, red-eyed zombies. And, of course, there’s that worst allergic reaction of all. Every creature alive falls in love long enough to breed.

Where will you take your three-week lover to dine? Like those baby birds, two new restaurants of note have hatched recently. I’ve only visited them once each, but they’re worth checking out.
Negril Village. This restaurant in the old fire station on North Avenue is kind of a big deal. Open only a week when I visited, it’s the spawn of a well-know Caribbean restaurant of the same name in New York City. The smallish menu includes the expected Jamaican dishes, along with some ambivalently Jamaican ones.

Among the classics is oxtails braised with lima beans, served in a shallow bowl with glossy gravy and a mound of rice and peas. It may be the best version of the signature Jamaican dish you ever sample. A tad more challenging is the island favorite of curried goat served with jasmine rice. For the uninitiated, goat hits a strong funky note on first taste, but quickly mellows. Negril also serves classic jerk chicken. Zagat readers voted the New York restaurant’s version the best in the city a few years back.

An example of a dish outside the Jamaican norm features a take on shrimp and grits. Negril’s chef adds big chunks of lobster and reclaims some island influence by using coconut milk to make the grits. It’s an incredibly rich dish. There’s also trendy  but not Jamaican “brick chicken” zapped with lime and ginger. The restaurant, happily, uses ginger like it should be used – strong enough to cause a sting in the throat. A carrot-coconut-ginger soup with roasted carrots and a virgin cocktail made with ginger both demonstrate this.

Big Sky Buckhead. Hector Santiago is one of my favorite chefs. When his Puerto-Rican-inspired Pura Vida closed, we lost one of the city’s best. Santiago is now chef at Abattoir, but he was recently consulted to produce the menu for the new, gigantic Big Sky Buckhead. (Yes, the name is meant to evoke Big Sky, Montana, set amid the Rocky Mountains, near Yellowstone. The view in Buckhead is not quite so rich.)

Big Sky’s day-to-day chef is Pedro Matos, who was chef at Santiago’s also-closed sandwich shop, Super Pan. The two chefs have produced a menu that can be a bit confusing. You choose a meat―pork belly, adobo-roasted pork, chicken or barbecued beef―to top off a $11.95 bowl of rice and beans or mixed greens. You can also order Santiago’s deservedly “legendary” slider-sized coconut-bread buns stuffed with some of the meats.
There’s a menu of snacky starters and sides―fries, Sriracha wings, black-bean hummus, for example―and agua frescas for those who want a cool drink without alcohol. One, for example, includes beets, orange and Andean blackberries. Dessert is fried coconut bread rolled in cane sugar and filled, if you like, with a pudding―vanilla-lime-avocado or coconut, for example.

The food is terrific, but certainly not on a par with the original Pura Vida’s. There’s an easy explanation. Big Sky is a Big Party, mainly for the under-40 crowd. Six of us dined there soon after its opening and we literally could not hear one another speak. Our server was hoarse from trying to explain the menu repeatedly. If you want to drink a lot, that won’t be a problem.
An alternative is to go for lunch, when the scene is far less manic. Word is that specials will eventually be added to the evening menu. You might want to call ahead to check that out. (3201 Cains Hill Place, 404-481-5168, www.bigskybuckhead.com.)

(Cliff Bostock, PhD, offers workshops and individual life-coaching sessions. Upcoming workshops include one on gay aging and one of the psychology of taste. 404-518-4415.)