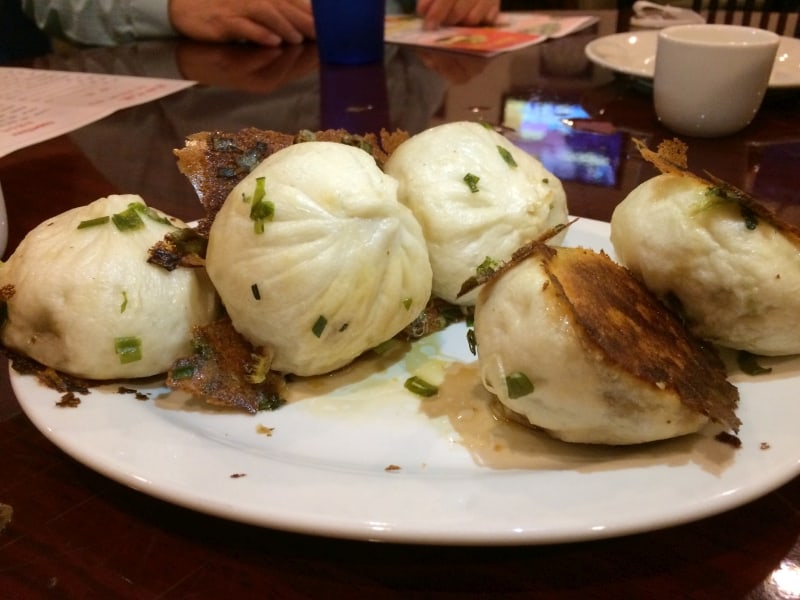 Atlanta foodies have been foraging for Chinese soup buns, slightly doughy dumplings called “xiaolongbao” on Buford Highway for years. Shaped somewhat like the swirly dome of a Russian minaret, a well-prepared soup dumpling is so richly comforting that it evokes homey fantasies of a better world, a world where Donald Trump is waterboarded until he admits that his penis is smaller than he bragged and we impeach him.

The latest place to gorge on xiaolongbao is Yong He Zhi Jia, which translates roughly as “Taiwan Special.” You’ll find it at 4897 Buford Hwy. (470-299-8929), at the end of a shopping center near Chamblee Tucker Road. Warning: At this writing, the restaurant had not removed the former tenant’s sign. So look for blazing yellow letters that read “Golden BBQ.”

Yong He Zhi Jia’s soup dumplings are served in large bamboo baskets of eight. I think part of their huge initial appeal to Americans has been the element of child-like surprise they evoke. If you hear the term “soup dumpling,” you of course imagine a dumpling afloat in soup. But this reverses that. You bite into the tender exterior of the soup bun and there’s an explosion of broth in which a tiny pork meatball of sorts has been floating. You suck the whole tender, juicy thing into your mouth and chew. It’s crazy and it’s messy-delicious. You feel like a kid who just discovered the cream inside a Twinkie. And you want more!

Of course, everyone wonders how you get soup inside a dumpling. One imagines a cook injecting the broth with a syringe. But the usual deal is that the pork filling is surrounded by a congealed lump of broth when it’s wrapped in the outer skin. Thus, when the dumpling is steamed, it melts into liquid.

There are many other dumplings/buns on the restaurant’s menu and, in truth, my favorite was the over-sized pan-fried pork bun. It’s steamed but also fried quickly on one side to supply the burnished crunch of a pot sticker. My table of five ordered two servings of these.

Another favorite for me was the beef pancake. It’s a thick serving of shredded pot roast between two layers of a mysterious, almost crumbly and slightly sweet bread. Think cornbread. The egg and green onion cake was a delicious accompaniment to another must-order – the beef-noodle soup. I know. It sounds bland and uninteresting, but I promise you that it’s without equal around town. The broth is dense and deeply, deeply flavored. It’s not overly-salty. It’s full of thick noodles and multiple slices of braised beef.

The temptations are endless and you should feel free to experiment. The restaurant is ridiculously inexpensive and portions are gigantic. My friends and I left our table literally blanketed with empty dishes and a bill of $12 each.

Service at the restaurant was great the evening of my visit, but I’ll warn you that English is a very second language here. You’ll need to be at least as patient as the server is. Be glad that the menu is illustrated. But know that some things are inscrutable. How, for example, does goat tripe soup end up on the “health food” section of the menu? Actually, that probably makes more sense than calling a man with bowels for brains president.