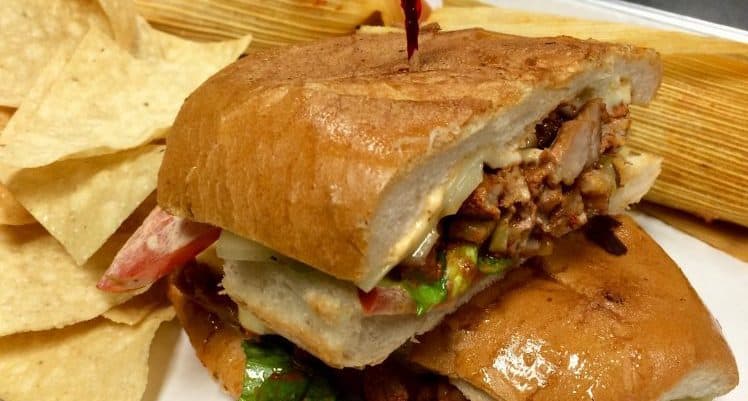 My Friday dining pals dragged me to the suburbs once again last week. Our destination, Taco Cantina (2517 Spring Road SE #101, 678-424-1826), is located in a shopping center in Smyrna. Getting there from a civilized location like Midtown requires driving through a labyrinth of hideous architecture, including the rear of Cumberland Mall. Be warned, too, that it’s near the under-construction Braves stadium, so a lunchtime visit isn’t the best choice.

The chef-owner is Adolfo Gonzalez, who immigrated from Mexico when he was 15. His story would make Donald Trump sweat. Gonzalez worked as a dishwasher at Atlanta Fish Market and ended up as sous chef by the age of 18. He continued working at other pricey, often-groundbreaking restaurants in the Buckhead Life Group. Then, in the summer of 2015, he and his wife Brianna opened Taco Cantina, which has been widely lauded.

There’s no doubt that the flavors of his dishes are authentic Mexican. But it’s also true that he brings unusual precision in the way he presents and plays with those flavors. In a recent interview with Brad Kaplan of Creative Loafing, Gonzalez noted: “People ask about authenticity, but my approach is a mix of growing up in Puebla and working in restaurants with chefs like Robert Holley, Pano Karatassos, and Kevin Rathbun — it’s authentic to me, to the way I cook, the way my mother used to cook.”

Thus, for one example, his al pastor torta (sandwich) is astonishing. To my chagrin at first, I learned his al pastor is not the traditional pork slow-cooked on a spit in a bath of pineapple juices. The sandwich, made with crisped white hoagie bread, instead contains chopped marinated pork with grilled pineapple. I can live with that, since it’s common most everywhere these days. But what totally shocks the palate is the unexpected combination of the pork with melted Swiss cheese. To that, Gonzalez adds grilled onions, chipotle mayo, and a bit of lettuce and tomato. It’s the best version of this torta I’ve ever had.

Probably the most popular torta here is not Mexican. It’s a delicious riff on the traditional Cuban sandwich. You get your usual ham and Swiss cheese, but Gonzalez adds his slow-cooked pork, carnitas, to the mix, along with a relish, mustard, and chile de arbol mayo.

If you like nachos – I don’t usually – you can order a gigantic plate for $8.95. It’s easily adequate for a table of six. You get to choose the meat, like the juicy, shredded brisket (barbacoa). Gonzalez also heaps the chips with beans, white cheese, grilled corn, guac, and pico de gallo. The dish is “cleaner” in all its ingredients but what really makes the difference is the quality of the meat.

There are plenty of tacos. The “regular” ones cost $1.85 and include, for example, carne asada (steak), chorizo, chicken, or al pastor. There are also “super tacos” for a dollar more that feature mainly seafood like squid, shrimp, and grilled fish. You anoint these with selections from the salsa bar where choices range from, among others, a scorching red to a cooling avocado and a tart tomatillo.

My main disappointment here was the tamales. The restaurant only serves them on Friday, Saturday, and Sunday. There were only three left when we arrived and I stingily ordered two of them, both stuffed with chicken. If anyone resented my doing that, they got the last laugh. They were almost inedibly dry. I also sampled the restaurant’s black beans and found them virtually tasteless. I was irritated that they had sold out of their one dessert, tres leches cake. The décor, by the way, is your expected hole-in-the-wall.

You’ll otherwise be stunned. It’s totally worth the journey through the architectural heart of darkness.