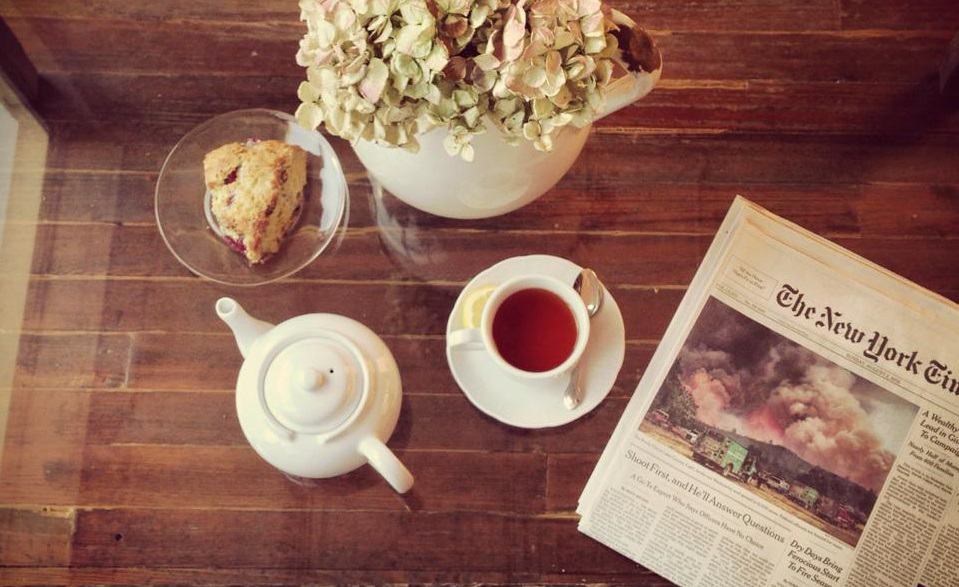 Perhaps you remember the Roman Lily Café, which opened on Highland Avenue in 1997 and closed 10 years later. Owner-chef Calavino Donati was a pioneer. Besides opening one of the first businesses in the Old Fourth Ward’s resurrection, she offered a unique menu of comfy dishes not unlike the Flying Biscuit’s, but far more innovative.

A couple of years after closing Roman Lily, she opened Urban Cannibals, a deli in East Atlanta Village, with her spouse Doria Roberts, a well known musician and activist. It closed after a five-year run, and now the two have opened Tipple and Rose Tea Parlor and Apothecary (806 N. Highland Ave., 678-705-7995, www.facebook.com/TippleAndRose) in the space vacated by Key Lime Salon in Virginia-Highland, next to Surin of Thailand. (There’s no sign as of this writing.)

What’s a tea parlor? It’s obviously a place to drink tea, but the word “parlor” reflects its additional historic role as a place to socialize. We’ve all seen pictures of Victorian-era women in white gloves sitting around a white tablecloth mid-afternoon, sipping tea poured from white pots and snacking on crumpets and scones. My grandfather was a Brit and I remember the ritual quite well. I did not wear white gloves at Tipple and Rose.

It is a cozy spot with brick walls and lots of wood tables bordered by banquettes. There are shelves of teatime accessories and apothecary items like syrups and soaps. It makes sense because tea is medicinal. The tea itself and the ritual of the tea party—no, not that kind—are calming. Of course, there are invigorating teas as well.

Tipple offers 84 varieties of tea. Incredibly, there’s a “sniffing bar.” You can open a small container and check out the bouquet. If you sniff enough, you’ll get, you know, a tea high. I settled on a lovey-dovey rose tea from Sri Lanka. It was served in the classic white pot with a white cup and saucer. The tray included a tiny hourglass.  Roberts instructed me not to dare remove the old-fashioned tea bag from the pot until the sand had emptied—about five minutes.

There are plenty of nibbles here—salads, sandwiches, and pastries. I sampled a salad of organic greens tossed with local peaches, apples, sun-dried cherries, toasted almonds, and a local cashew cheese. I had half a sandwich of house-made chicken salad and another of duck salad. Both were served on croissants from the Bread Garden. I recommend the duck. It has that luscious, earthy oiliness that contrasts well with the crisp bread and the other layers of flavor like sun-dried tomatoes, toasted pecans, and Dijon aioli.

I also tried a scone, my favorite pastry, baked by Roberts herself. You can order frightfully addictive house-made lemon curd or insanely rich clotted cream to spread on them. The scone was crumbly and a bit airy—flawless in its way.

Roberts and Donati are opening two new venues in the coming months. One will be a reprise of Urban Cannibals on a larger scale in the vacated location of Las Palmeras on 5th Street in Midtown. The other, Madre and Mason, will take over the location of Couscous on Dutch Valley Road. It will feature a fascinating hybrid of Southern and Latin flavors.

In the meantime, be sure to visit Tipple. It’s open 9 a.m. to 9 p.m. Tuesday-Saturday and 11 a.m. to 7 p.m. Sundays. You can arrange a traditional tea party by calling ahead.