Classic sneaker brand Converse has released their latest Pride collection, featuring not only the classic Pride rainbow, but some pink and blue trans pride moments, too!

All the styles come in low- and high-top styles, bear a rainbow rubber bottom, and come in both adult and kids sizes. While there are eight preset designs – the “Yes to Love” trans pride low-top is currently sold out – all shoes are completely customizable.

The kids sizes will run you $60, while the bigger sizes are pricier at $80.

While many brands, like Gucci, have hopped on the Pride train and released similar Pride shoes in the past, this appears to be the first transgender pride sneaker available, much to the delight of many trans people on Twitter.

Me, looking at the chuck taylor pride collection for this year: *not super impressed*
Converse: we have trans shoes now
Me, out loud: DAMMIT pic.twitter.com/oqzpDUqaOD

Most of Twitter’s LGBTQ community sounded off with excitement about the new line.

However, some expressed worry about “rainbow capitalism” and the exploitation of the marginalized LGBTQ community for profit.

So @Converse just released these for Pride 2019, and holy shit I love them, but they're $80 and no mention of an LGBT charity initiative which feels….kind of exploitative and gross? Hopefully there is one, and I'm just not seeing it? pic.twitter.com/7tM4ogqkpE

However, Converse has supported the LGBTQ community in ways that extend past their sneakers. A representative told the Georgia Voice that Converse has donated almost $1 million to LGBTQ organizations and causes since 2014 and has long-standing partnerships with organizations like Fenway Health, the leading LGBTQ medical care provider in the nation, and @itgetsbetter, an web-based non-profit existing to uplift, empower, and connect LGBTQ youth worldwide.

This year, Converse will make contributions to their longstanding LGBTQ partners the It Gets Better Project, OUT Metrowest, and Fenway Health.

In addition to the sneaker line, Converse has also launched the “All The Stories Are True” campaign, which amplifies the voices of six people connected to the LGBTQ community: Desmond is Amazing, a drag kid and LGBTQ advocate; Kristin Beck, a retired US Navy SEAL and transgender activist; Alexis Sablone, a pro-skateboarder and artist; Felix, a student advocate; Ayishat Akanbi, a UK-based fashion stylist, writer, and cultural commentator; and Fran Tirado, a New York-based writer and editor. 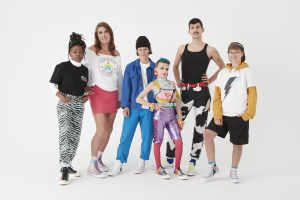 By sharing the stories and powerful words of these individuals, Converse hopes to show the power of expressing one’s true self.