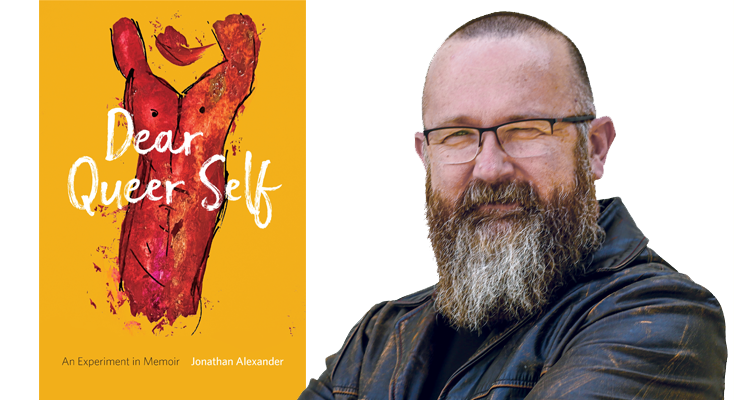 ‘Dear Queer Self’ is an Accepting Love Letter to Younger Self

“Dear Queer Self: An Experiment in Memoir” is a third memoir from queer author Jonathan Alexander. This time around, Alexander wanted to get a little more personal.

Alexander, a Chancellor’s Professor of English at the University of California, Irvine, wrote the first two books of the trilogy, “Creep: A Life, a Theory, an Apology” and “Bullied: The Story of An Abuse” to rave reviews several years ago.

In the beginning of his writing, Alexander thought his latest book would take on the mantra, ‘it gets better,’ but instead he realized it was more about personal acceptance, he said in an interview with Georgia Voice.

Like many people trying to come to terms with their sexuality, Alexander recalled that he endured a lot and struggled to even accept himself. He later realized that he had internalized many of his family trauma and the world’s negative views around homosexuality. This was due in part because of his upbringing in the deeply religious South and trying to navigate life. Jonathan grew up in New Orleans, Louisiana.

The book focuses on three pivotal years: 1989, 1993 and 1996. Those years Jonathan recalled were times when big things were happening not only in his life but in the world – him graduating from college, the rise of the AIDS crisis, the fall of the Berlin Wall (which many thought might lead to more democracy), election of Democratic President Bill Clinton, and the seeming advancement of rights for LGBTQ people.

“Dear Queer Self” is more than just a book; it also comes with its own playlist. Each of the three sections includes a YouTube playlist surrounding the years Alexander explores. Chapters in the book are named after pop songs from these years, such as “Giving You the Best that I Got” by Anita Baker (1989) and “Who Will Save Your Soul” by Jewel (1996).

In writing this book of love letters and acceptance to himself, Alexander hopes readers will be able to resonate with some of the similar feelings and struggles of accepting not only himself but also his sexuality.

“I always want people to feel that they are not alone,” he said.

“I hope people realize that there is a lot in our culture that keeps us separate, and that’s a shame,” Alexander continued. “We are afraid of each other. I was afraid of being different. Our culture makes us afraid to be different.”

He is hopeful that “Dear Queer Self” will help readers to be gentle with themselves as they learn to accept and come to terms with who they are and not give into the negative.

So far since its release in March by Acre Books, “Dear Queer Self” has been praised by members of the LGBTQ community. Although there are no book tours slated for Atlanta, Jonathan said he is open to it, and would love to return to Atlanta to discuss his latest book.

“Dear Queer Self” can be purchased at Charis Books and More or at acre-books.com.