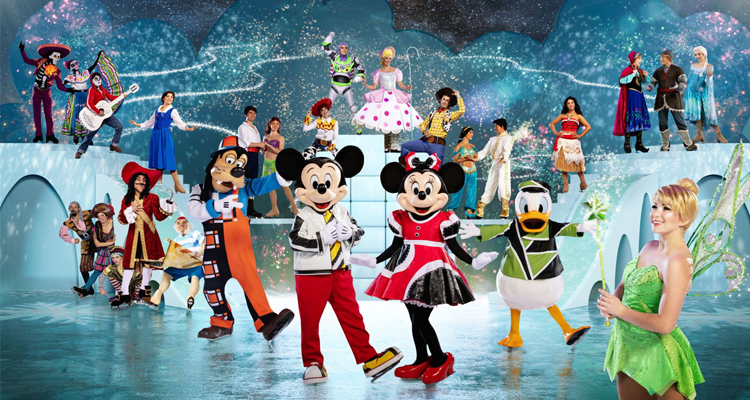 As the number of people who have been vaccinated against the COVID-19 virus increases, live events are becoming possible again in the ATL. “Disney on Ice Presents Mickey’s Search Party,” produced by Feld Entertainment, comes to town this weekend with several LGBTQ performers among its ensemble.

Cale Ambroz is one of the production’s stars, playing the character of Aladdin. Other characters in the family-friendly show, which brings together a variety of fan favorites, include Buzz Lightyear and Elsa.

Ambroz grew up in New Prague, Minnesota and joined his local skating club. He started skating when he was six years old, but hated it and quit because he thought it was too hard. His mother suggested that he give it one more chance — and the rest is history. “I would not be here if it were not for my mom,” he said. A multiple-time Minnesota state champion, Ambroz competed at the Junior National Championships and the U.S. National Championships.

He quit at the age of 19, though, and almost immediately joined Disney on Ice in 2013. At that time, he had to choose between going to school or doing Disney on Ice. “I never looked back,” he said. Pre-COVID, he would be in eight to ten performances a week, but — like most performance companies — the company had to put shows to a halt last year before returning in the fall. “Disney on Ice Presents Mickey’s Search Party” is one of Ambroz’s favorites. “It’s creative and uses a lot of different styles other than ice skating,” he said. The show has a cast of close to 50 performers.

Skating competitively was a huge commitment. “It’s a mental game, like most sports are,” Ambroz said. “It had challenges, but it was rewarding. I have found a bigger love in performing though. I had no idea what it was going to be like until I joined but getting out there and making other people smile and kids happy, seeing their dreams come to life, is a special feeling.”

Ambroz was a solo performer and never did pairs work until Disney on Ice. Being part of the Disney On Ice troupe is more fun and less stressful, with much less pressure. “As a competitive skater you are there by yourself and everyone is watching you,” he said. “It doesn’t matter if you mess up here because the kids just want to have fun. You get to share the moment and the oohs and aahs.”

He came out at 18, a little bit before he started Disney on Ice. It was not an easy decision for him. “You’re not sure how your family and friends are going to react, but it was the best decision I ever made,” Ambroz said. “I am happy with how my life is now. I grew into my own skin traveling with these shows. It’s inspiring and motivating to grow up in this kind of environment. Everyone just wants you to do well.”

As for others shows in Atlanta, “Hamilton” has made a triumphant return to the Fox Theatre, closing this weekend after a month-long engagement. The Fox closed in March of last year and reopened in July with a few events, says Jamie Vosmeier, the company’s out Vice President of Sales and Marketing.

He knows people are concerned about the Delta variant, but ticket sales were strong. “I think people are excited about getting back to live theater,” he said. The Fox is mandating masks, and while the building was closed down, lots of changes were made. Eventually the Fox was accredited through the Global Biorisk Advisory Council, one of the first performing arts venues in the state to achieve star accreditation. “We are implementing the most stringent protocols for cleaning and disinfecting, so we are super clean.” They also installed ultraviolet germicidal irradiation systems and increased air filtration so air is cleaned constantly. The rest of the upcoming Broadway series at the Fox includes “Fiddler on the Roof” in November, “Dr. Seuss’ How the Grinch Stole Christmas! The Musical” in December and “Tootsie” in January.

Finally, Atlanta Fringe & Metropolitan Studios are presenting “A Queer Day’s Night,” an upcoming lineup of LGBTQ performances on what would have been Atlanta Pride weekend. One performance, titled “Gay History for Straight People,” features Fringe veteran Will Nolan and his alter ego Leola, a “Kelly Clarkson-obsessed, redneck senior-citizen lesbian.”