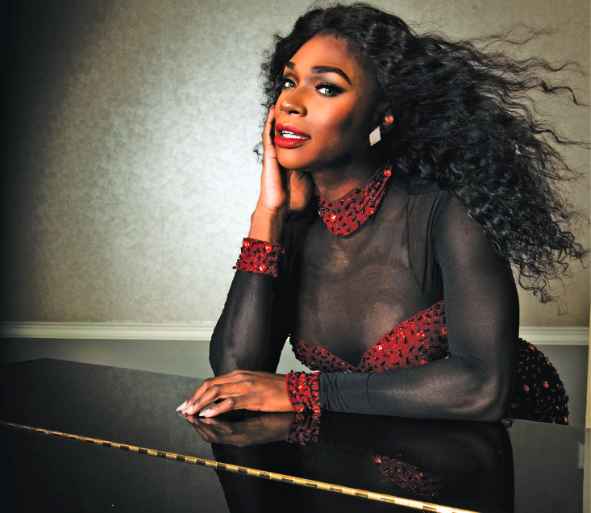 “If you want fame—well fame costs. And right here is where you start paying in sweat.” If you quote that line to any performing artist, more often than not, they’ll be able to tell you the name of the ‘80s television show (“Fame”) and actress (Debbie Allen) that made it famous. The theme song, with its catchy and urgent plea to “remember my name,” played on a never-ending loop in my mind as Atlanta drag queen Dynisty St. James sauntered into The Georgian Terrace Hotel (with her own personal wind machine) for the Georgia Voice photo shoot.

Within seconds, it’s obvious there’s something special about her. It’s almost impossible not to feel as if you’re in the presence of the next big thing—an unnoticed drag superstar that is just waiting for her moment to break out. And the fact that St. James considers herself an underdog on the Atlanta drag scene after six years in the game—despite an arsenal of talent, which she wields like a fierce assassin as soon as the lights dim and she steps onstage—makes her even more endearing. She’s got the IT factor. But you’ll never hear her say so, preferring instead to let that truth sneak up and captivate you.

We sat down to chat with St. James as she beat her face to step in front of the camera and days before a video of a recent performance inched towards viral status online. You may not know her name now but you will.

Georgia Voice: Tell us about your decision to start performing in drag.

I always dressed up or put on costumes. And when I was younger, I saw “To Wong Foo” and that really inspired me to pursue it.

Was your first experience on stage in drag a nightmare? It seems that’s the case for a lot of new queens.

Let’s just say I was casket sharp. One of the best makeup jobs I’ve ever had in my life. I was probably as gray as the color gray. I did Beyoncé’s “If I Were a Boy,” and I looked just like a boy. It was lovely [laughs]. I stomped across the stage like I was stomping roaches! I didn’t know how to walk in heels. I was all types of awful.

Is your family supportive?

My family is supportive. They weren’t at first. But I guess that’s a lot of black families, though. “It’s a sin. You’re going to hell.” [laughs] After a while they opened up. My mom actually came to one of my drag shows. She came down to Fantasy Girls for her birthday and she had a blast. It was my first time ever partying with my mom in drag.

What advice, if any, have you received from drag mentors?

The best advice I received is to keep pushing, keep going. The door is gonna open someday. 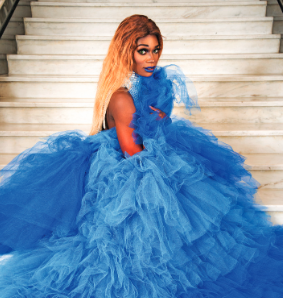 Are there any unique challenges around being a black drag queen in Atlanta?

There’s a lot of challenges. I am kinda, like, the darkest girl on the scene that I’m in. I get a lot of backlash sometimes. People talk about how dark you are…you’re African and stuff like that. But I just have to let that roll off and keep going. I guess that’s just queens being shady.

So how do you handle that? What’s your survival technique?

Where do you see yourself in the next five years?

In five years, I wanna be the next drag superstar, like, RuPaul. I wanna be a recording artist, actor/actress, model—everything.

Speaking of RuPaul. What kind of effect do you think “Drag Race” has had on your industry?

I see it as a positive and also as a negative. The negative is that everyone thinks they know everything about drag. The positive side is that you’re getting seen. They’re talented girls and it’s their time to be seen.

Would you go on the show?

Yes, I would go on that show. As a matter of fact, hopefully I’ll be auditioning this year.