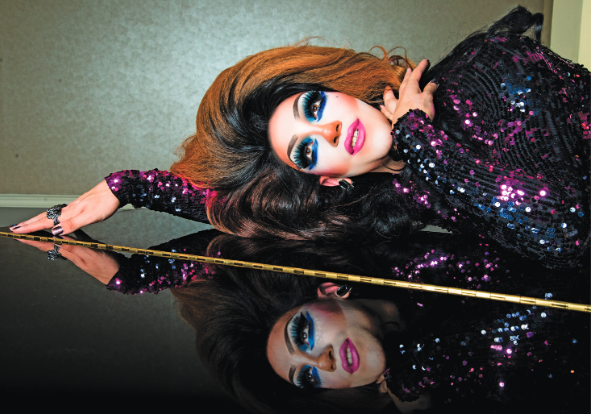 The last name is the first indicator that this queen is here to wreck shop. It’s been a little over five years since Alexander Surian birthed his drag persona Evah Destruction and she’s not looking back.

A recent winner of the 2016 Best of Atlanta award for Best Drag Queen, Destruction has amassed an impressive following in the years leading up to her latest honor to become one of the most recognizable and formidable drag queens in Atlanta.

But did you know Evah Destruction was almost Genevieve? Yeah, let’s collectively thank the drag gods for the name change and for the sweet destruction this queen leaves all over town. We asked about her unique name and everything else in-between (no pun intended). Get into it.

Your name is so unique. How did you come up with it?

Evah Destruction: Me and my lesbian friend were sitting in our living room because I was trying to get ready for a drag show, and she literally said, “What about Evah Destruction?” I said, “That’s perfect.” I wanted a name that would stand out and immediately grab people’s attention when they heard it. At first, I wanted something super fancy and French-sounding, like Genevieve or something. But I know for a fact that a lot of queens can’t spell. So I was like, I’m just gonna go with Evah Destruction because that’s super punk rock.

Tell us about your decision to start performing in drag.

When I turned 18 and I went up to Jungle for the first time and I saw Phoenix perform. I’ll never forget this. She performed “U + Ur Hand” by Pink. I said, “That’s actually a lot different than what I was expecting.” And it was actually really entertaining. It was lovely and it was really well put together.

And then I saw my first drag mother perform, Jasmine Antoinette, and she kind of took it to a more theatrical place. And that immediately clicked in my head. I said, “Okay, this is obviously something I could try.”

I come from a musical theater background—this is just getting into a character. So I did it. Needless to say, it was a hot boogery mess! [Laughs] I almost went out there (on stage) without setting my foundation with any powder. Monica (Van Pelt) came up behind me and said, “You’re gonna set your face, right?” And I said, “What is that?” She took her powder puff and slapped me across the face.

Do you still get nervous?

Oh of course. It’s always that few minutes right before they call my name. I get those butterflies and immediately when I step on stage it all goes away as soon as I face the crowd. It’s quite liberating, actually. To feel less than the audience for 2.5 seconds and then when you get on stage, you feel like you’re on top of the Empire State Building.

Is drag a full-time gig for you? 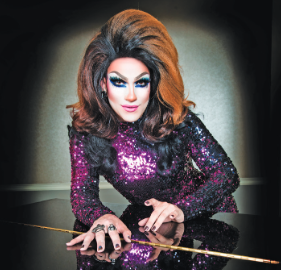 How do people react when they learn you do drag for a living?

They’re a little shocked. A lot of people think that drag is a one-night a week thing and it’s not a lucrative career. But in all actuality, if you know the game and you know how to market and brand yourself correctly…I pay my bills. This pays for the way I live comfortably. I don’t even hide it anymore. When people ask me what I do, I say, “I’m a drag queen.” And then they give me a look [like a deer in headlights]. “What? You thought these dollar bills were from me being a stripper?”

There’s a debate about whether or not drag is now mainstream? Do you think it is?

Where do you see yourself in five years?