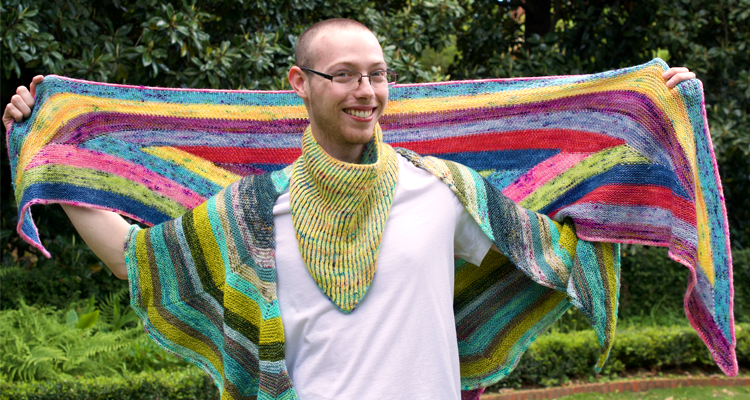 In mid-April, a brand-new locally dyed yarn colorway made its way to the display walls and website of Revival Yarns in Athens Georgia.

The bright white wool yarn is dotted with punches of neon orange, highlighter yellow, lime green and shades of hot pinks and purples, and it’s called “I’m So Gay.” It’s one of the newest creations from out dyer Ryan Burke, and it’s a name and color design that are both quite personal.

“I knew I want a white background and I want rainbow speckles because I’m gay and I want rainbows. I just love them,” Burke told Georgia Voice. “The feeling of rainbows, and it’s bright and happy, and it’s representative of a very important aspect of me. If I weren’t gay, I would be a very different person.”

Calling the neon-sprinkled white yarn “I’m So Gay” has a dual meaning.

“When I see something that makes me happy or is really beautiful, my first reaction is ‘I love it’ and to love things is ‘I’m so gay’ in my mind,” he said. “It does have the dual meanings of gay and happy, but like, I’m gay and I like this.”

An eye for color

Cara Cannon and Lindsay Woodson, co-owners of Revival Yarns, said Ryan Yarn stood out in their shop because of the color palette.

“Ryan Yarn has been one of our best sellers during the pandemic. We can’t keep it on our shelves,” Cannon said in an email to Georgia Voice. “Besides it being absolutely beautiful, I think our customers love supporting someone they know who lives in the community.”

Among his biggest supporters is Atlanta-based dyer Kathleen Royston, owner of Republica Unicornia, who Burke called his dyeing “lord and savior.”

“His color sensibility is outstanding and interesting,” Royston said. “I get the sense that he comes at it as a knitter first. The way he dyes yarn, it’s not just going for drama in the skein as you’re doing it, but you’re going to love it every step of the way.”

Royston met Burke through a mutual friend, and their friendship is much more than that of an experienced dyer mentoring someone new to the craft.

“He’s been really supportive and instrumental when I was early in the business,” Royston said. “When he started dyeing yarn … I sat him down and answered all of his questions. Everyone’s work is going to look different, so it seemed weird to me to not share that and help someone else not have to learn the hard way.”

When she moved from home-dyeing to a studio, it was Burke she turned to for suggestions on using and installing a dye cabinet.

“He’s a really fantastic knitter, but he’s really personable and he knows everybody. And he’s a dude where there aren’t often dudes, and he’s really warm and funny and thoughtful,” Royston said. “He has this ability to connect people and is really generous with his praise and his time. … When you buy his yarn, you’re getting all of that stuff too. You’re getting him in it.”

Burke grew up in the Savannah area and moved to Athens in 2014 for college. He was introduced to fiber arts at an early age, but didn’t return to knitting until then.

“I joined UGA’s knitting club,” he said. “Everyone was knitting all these beautiful cowls and shawls and I was like, ‘I need to get in on this.’”

“In on this,” he got, indeed. Burke completed a slew of pieces and picked up countless stitch techniques.

“There’s something really soothing about the motions of knitting; of putting your needle into the stitch, wrapping the yarn around and sliding it off,” Burke said. “I also just really love the way knitted fabric feels.”

After graduating from the University of Georgia, Burke worked with a local dyer to learn her craft, and inherited her supplies when she closed up shop. The stars aligned and in January, Ryan Yarn became official.

“Most of the time I figure out what color I’m in the mood to dye that day,” he said. “The names come afterward. They’ll be hanging up to dry in the living room and I usually am just thinking about names.”

The names of his colorways are inspired by music, such as “Future Nostalgia,” a mauve-coral color named for Dua Lipa’s new album, or names with a personal connection. “Sundays at Revival,” a gray yarn flecked with blue and yellow, is named for the beloved couch of those same colors, where Burke and fellow fiber lovers gather for open knitting hours each weekend at the shop.

“I enjoy dyeing the yarn and making something beautiful. I want them to spend hours working with my yarn and making it into something,” Burke said. “As people finish their big sweaters and stuff, it’s a really amazing, really special feeling. Like, I dyed that and somebody made that, and loved it and touched it for 40 hours. It’s wild.”