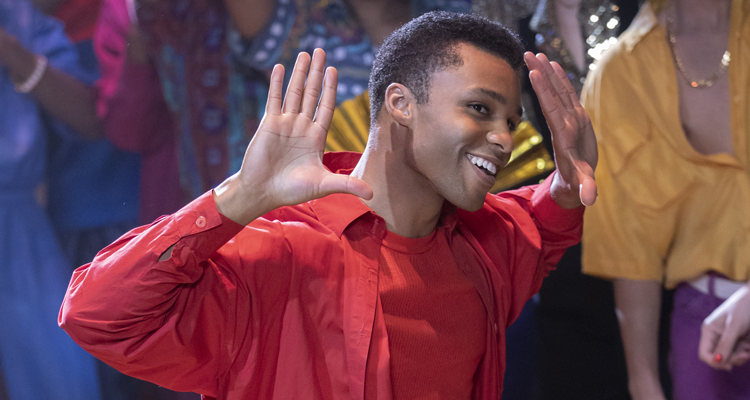 Like virtually everyone else, when “Pose” actor Dyllón Burnside found out that the new season of the landmark show, its third, would be the last, he was a bit surprised. He learned the news earlier this year when the cast had a conversation with producer Janet Mock. “I wasn’t totally shocked,” he admits. “There had been some conversation about it before, but nothing was concrete. I wasn’t totally caught off guard, but it also knocked the wind out of me when I found out.”

In the landmark series, Burnside stars as Ricky Wintour, who is Damon’s ex-boyfriend and a previous member of the House of Evangelista. In the second season he learns he is HIV-positive and starts a relationship with Pray Tell (played by Emmy winner Billy Porter).

The final season of the show, which premieres May 2, started production in March of 2020, but production was delayed because of COVID-19. The actors were able to resume filming in October of last year. Filming the last episode was emotional for Burnside, especially when he opened the envelope and seeing the script that said “Series Finale” on it. “When I got to the last page, I broke down crying,” he said. “Saying goodbye to [everyone] was bittersweet. It felt like graduation day.”

The new season allows the audience to get to know more of Ricky. The actor says assumptions were made about Ricky when the audience first met him. “Lots of folks, in the first season, talked about him being a playboy. I think by the time we meet him in season three we get to see Ricky as a full human being and not just this playboy or object of desire for people,” Burnside said. “We get to see him as a young man looking for love who wants to create a life for himself and a family for himself. He’s found a sense of home with Pray. We get to see him maturing as a young adult and understanding his place in the community and as an artist, as a dancer.”

Burnside — who has spent much of his life in Atlanta and is also a recording artist — and his family moved to the area when he was six and lived there until he was 12. When his family moved back to Florida, they kept their home in Conyers. “We’d come back, and Atlanta is a city that is a mecca for recording music such as R&B and hip hop. I’d spend time there recording.”

He spent much of last year at his mother’s house in Conyers enjoying some down time. “It was great, actually,” he said. “I almost feel bad saying that, but it was a time for my mother and I to connect. We spent about six months together, and we had not gotten to spend that much time together in a long time. It was nice to be part of her life day to day during this crazy time. It was also nice to unplug from city life. We live out in the woods in Conyers, so it’s a nice retreat from the city. I’m a country boy at heart. I love being able to sit out on the patio and put my feet in the grass. I anticipate spending a lot more time down in the South.”

The recent social unrest surrounding police brutality has not been easy for Burnside. He dealt with it day to day. “With so much going on with the murder of Daunte Wright and so many others killed and assaulted by police officers, it’s all over the news and social media and the Internet and it’s hard to process when you are inundated with it all the time,” he said. “I had to unplug. I also needed to find ways to get activated. I marched and protested in Atlanta and in D.C. I also got involved with the People’s Uprising Task Force in Atlanta that is seeking to bridge the gap between the community, the community’s needs and actual change in the political process.”

The actor has some TV projects in development, as well as a single coming out this summer. Burnside might also be returning to Broadway in the fall.

It will be hard for him to find another project as gratifying as “Pose,” though. It’s been a fulfilling experience in many ways. “I have learned so much. I get to work with these amazing artists and amazing human beings who have taught me so much about being a better person and a better advocate for LGBTQ issues, trans issues, Black people issues,” he said. “It’s not every day you get to work on a project that is both artistically fulfilling and challenging but is personally edifying and challenges you to be better.”

The third and final season of “Pose” premieres May 2 on FX.