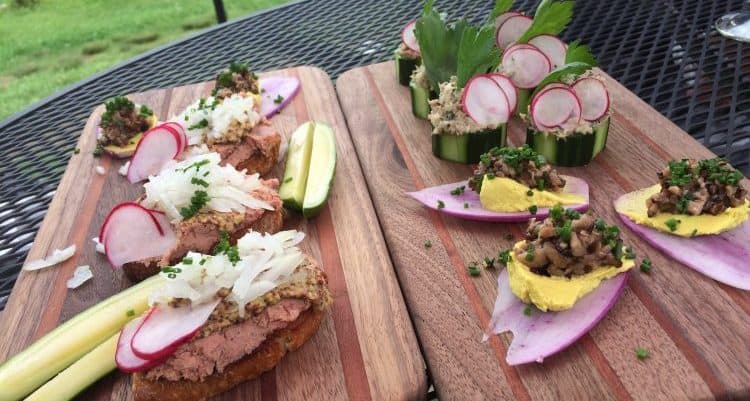 Eating My Words: Birthday favorites in and out of town

The birthday monster arrived at my door June 16 to scrape more hair from my scalp and drain more collagen from my flesh. Instead of hiding, I decided to treat myself to a few things. Primarily, I wrangled friends into meals at restaurants headed by two of my favorite chefs.

First was BoccaLupo (753 Edgewood Ave., 404-577-2332, boccalupoatl.com). Owner-chef Bruce Logue’s changing menu of Italian-American food has been among my favorites ever since he moved to Atlanta almost 10 years ago and became the opening chef at the now defunct La Pietra Cucina. Before that, Logue worked at the renowned Babbo in New York, among other notable restaurants in the USA and Italy.

Logue continues Babbo’s blend of classic Italian techniques featuring local ingredients. Above all, his cooking is highly inventive. He culls the globe. For example, a favorite starter is dubbed bruschetta banh mi, mashing up the classic Italian toasted bread with the iconic Vietnamese sandwich. The toppings include long-cooked pork, a layer of chicken liver and a bit of giardineria, the Italian relish. My one complaint was what seemed to me like an excess of onion. Nobody agreed with me.

I love chicken liver, so I couldn’t resist an entrée of open-face ravioli with lusciously tender, broad noodles folded over the chicken livers with green marlmalade and pink-eyed peas on the side. The dish was heavily scattered with herbs, and I have to say the plating was not too appealing, but, hey, they hid something so rich, I had to take home a third of it.

Other dishes we ordered – most of which I’ve had before – included calamari in a Sicilian tomato broth with pine nuts and capers; fried cauliflower with mint and capers; super-rich 20-egg tagliatelle with wild mushrooms and “kale kimchi;” and a hilariously wonderful Southern fried chicken parmesan you need to order. We had two desserts. The best was cream cheese panna cotta with blueberry jelly and squid-ink crumbs. The lesser was chocolate mezzacotta – a gooey, molten-pudding-cake-like substance that would make a good facial mask during kinky sex.

My other meal was brunch at the Red Barn Cafe, two hours away in Rabun County (2592 Old Highway 441 South, Tiger, GA, 30576, 404-563-3706, tigerwine.com). I went here last year too, drawn by Chef David Sweeney, the best vegetarian chef in the country. He works here only during the summer and fall. The cafe is open weekends – Fridays for dinner, Saturdays for lunch and dinner and Sundays for brunch.

The local clientele demands meat, of course, so there’s way more than you’d expect from Sweeney. Small-plate examples are “memaw’s favorite liverwurst toast.” It’s a study in earthy flavors you spike with whole grain mustard, radishes and half-sour pickles. There’s also chunks of hollowed cucumber filled with deviled ham. But my favorite by far were the perfect orbs of falafel with a turmeric yogurt, pickled pepper, cucumber, sesame and cilantro. Second was purple daikon topped with cashew cream, a concoction that included shiitake mushrooms, turmeric and chives.

We only ordered one entrée – a sandwich of turkey schnitzel on a brioche bun with marinated cukes and fried potatoes. It was just as novel as every other dish. We were way too full to try the chocolate pie with a maca-almond crust, golden berries and toasted coconut. But the view of the Tiger Mountain Vineyards, and a bottle of their wine for my friends, was enough sweetness. I hope the grave is as nice.