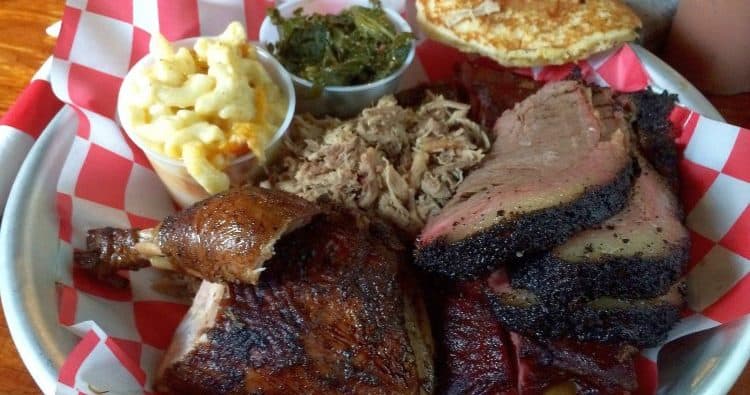 Eating My Words: Bro-ing down at B’s Cracklin’ Barbecue

As you know, gay men are obsessed with being “masc.” To earn the distinction requires, according to social media sites, that you enjoy college football, outdoor activities (like pool parties?) and, weirdly, grilling. Yep, the girly men can bake cornbread, but only a man’s man can barbecue a pig butt.

Probably the most manly barbecue these days is to be found at B’s Cracklin’ Barbecue in the Riverside neighborhood in west Atlanta (2061 Main St., 678-949-9912, bscracklinbbq.com). The owner-pitmaster is Bryan Furman, who opened a restaurant of the same name in Savannah in 2014. It was an instant hit, earning mentions on “best of” lists at the national level. Unfortunately, that restaurant burned down in 2015, but quickly reopened in another Savannah location. And, last year, Furman and his wife Nikki added the Atlanta venue.

The restaurant – or “joint,” if you prefer – is no-frills and has two dining areas. The sunlit room up front includes only community tables. The larger, darker main dining room is more diverse and also includes a full bar. The space is large, so I doubt there’s ever much of a wait.

What makes the barbecue so unusually good? Furman had a stroke of genius when he was planning his first restaurant: He only smokes local heritage hogs. If you’re a BBQ freak, you’ll recognize the difference in taste right away. The flavor of the pork and ribs is so, um, meaty that I found myself not even going for the sauces. The ribs’ meat is firm, not falling apart, which, for some reason, is preferred by many people. The brisket is astounding. The fat slices of meat are surrounded by a layer of slightly charred fat. The chicken was the most burnished of the meats I sampled. It, like everything else, was juicy. Too many restaurants smoke their meats to the point of desiccation. Then you have to pump so much sauce on your plate that you lose the flavor of the meat itself.

What first compelled me to visit B’s was learning that Furman grew up in South Carolina, where mustard-based sauces are most popular. His is phenomenal. It’s infused with peaches, the sweetness of which collides with the strong mustard. It should be available at better grocery stores that have a crack aisle. He also makes the sauce I grew up eating – North Carolina’s vinegar-based concoction. I found it to be especially good squirted on the brisket. There’s a third ketchupy Georgia-style sauce. No thanks.

Any veggie sides are locally sourced. The collards, however, were so complicated, all I could taste was a mishmash of flavors. I think I even detected cumin. The mac ‘n’ cheese was as rich as it gets. Banana pudding was as sweet as it gets.

Complaints? Only one. When I ordered my meal, I asked for cracklin’ cornbread. The server told me it came with all plates. What I received, though, was a sweet hoecake. It was delicious, but I wanted those little chunks of pork skin that my mother put in her sugar-free cornbread.

Oh. One more complaint. The portions are abnormally gigantic. But, hey, what could be more masc than brandishing half a chicken in one hand and a rack of ribs in the other? Let’s eat this thing, bro.