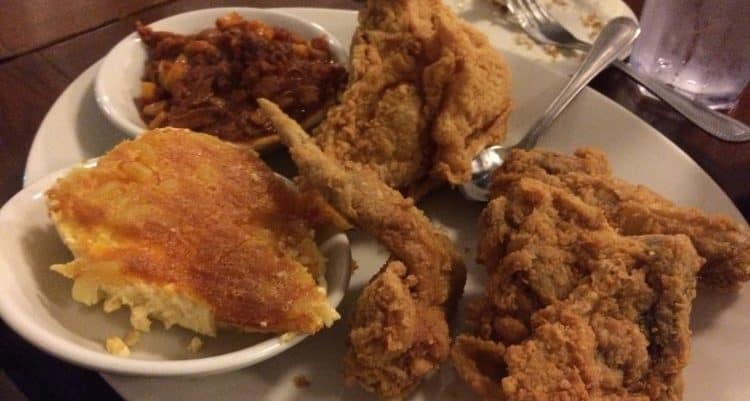 Watching the United States turn into a full-fledged plutocracy, headed by an orange puppet of corporate business, hideously supported by the same people who are its victims, has been surreal. I’m old enough to have been active in the civil rights and anti-war movements and I was a member of my college’s chapter of SDS (Students for a Democratic Society). I hope we see some resurgence of activism.

It was a constant battle then and, of course, we required relief at times. I remember spending one weekend on the James River with friends. Fucked-up on acid and pot, we collected oysters, feasting greedily, singing and dancing. Hippies. Kind of.

Dining with friends, no matter the context, has always been a way of finding refuge. No, I don’t suggest you go splash naked in the Chattahoochee, but I do advocate breaking bread at home or restaurants that give you comfort and, perhaps, a dose of nostalgia, even if they aren’t the best around.

I dined with friends at two such restaurants in the past few weeks, starting with the stalwart Mary Mac’s Tea Room (224 Ponce de Leon Ave., 404-876-1800, www.marymacs.com). This iconic Southern, somewhat touristy restaurant opened in 1945. It hasn’t been without controversy. I remember that even in the ‘80s, the walls were decorated with uneasy pictures of black people laboring in the kitchen. I participated in an ACT UP demonstration there because the owner was campaigning against the nearby location of Grady Hospital’s treatment center for people with AIDS.

Over the years, especially with the restaurant’s purchase by John Ferrell in 1994, controversy has subsided and décor has shifted radically toward elegance. The walls are covered with the countless celebrities who have eaten there.

The food remains about the same. The fried chicken is still the best dish on the menu in my opinion. I admit to a peculiar tendency over the years to order the same thing, chicken and dumplings, even though I never feel quite satisfied. It’s a dish you seldom see on Atlanta menus, so I can never resist. The problem for me is that it is too soupy. Yeah, I know that’s usual, but if it’s soupy, the dumplings should be large. Mary Mac’s are not.

An appetizer I often order is the pot likker with cracklin’ cornbread, something my mother prepared. It’s the water left after cooking a pot of collards. Unfortunately, the cracklings – bits of crunchy pork fat – are way too scarce in the cornbread. Still, it’s a nostalgic treat.

We also recently visited R Thomas Deluxe Grill (1812 Peachtree St., 404-881-0246, www.rthomasdeluxegrill.net). The 82-year-old owner, Richard Thomas, died a few weeks ago, but the restaurant has been under the management of family members for some time.

When it opened in 1985, it was one of the few restaurants open 24 hours. Thomas was the first operations manager of Kentucky Fried Chicken and founded the Bojangles’ chain. I well remember the early days. It had a psychedelic interior of revolving lights that still remain. Thomas gardened outside and maintained a virtual aviary of exotic birds on the premises.

The original menu was typical of burger joints. Somewhere around 2000, though, Thomas got on a health food kick that changed the menu big-time. We’re talking vegetarian, gluten-free and vegan fare, free-range meats, juices, and smoothies. As a frequent customer, I wasn’t happy and Thomas chided me frequently.

During my recent visit, a friend and I both ordered the chicken piccata, one of my favorite dishes generally. Another ordered the salmon piccata. Alas, R. Thomas’ piccatta lacks a vital ingredient. While the salmon and the chicken strips dusted with amaranth flour, both burnished with a lemony sauce, had great flavor, where were the capers? It’s an essential ingredient!

The table’s best dish was a fat sandwich layered with grilled chicken. Veggie sides, like green beans, pureed beets and something we couldn’t even identify, took the most space on my plate.

These are restaurants that have played vital roles in Atlanta’s culinary development. While they won’t banish the Donald, they may help you remember better times.