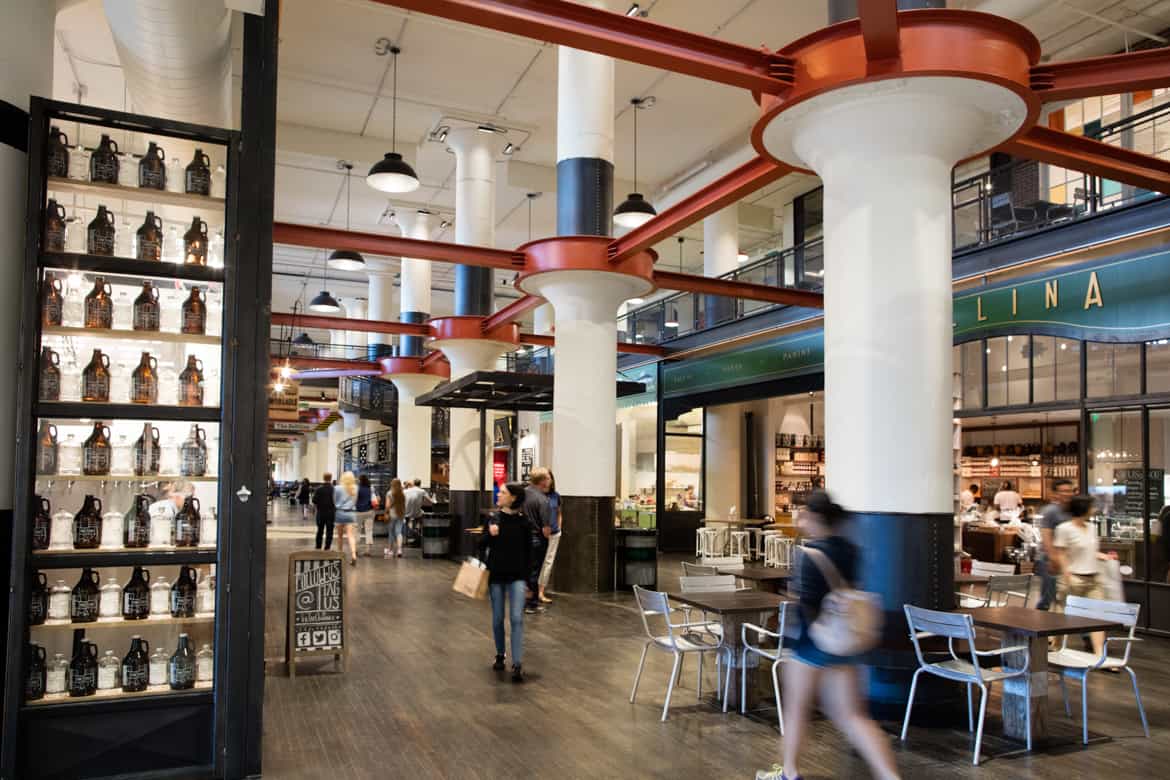 The food scene, like everything else in our culture, is subject to fads. Once upon a time, kiwi fruit was high-fashion, along with fake white truffle oil. Kale, my sources tell me, is finally starting to falter and hopefully will soon return to its former use as an inedible liner for buffet bars. And then there were the food trucks, dispensing overpriced street food, much of which a carnival worker on death row wouldn’t eat for his last meal.

Now, you’ve probably noticed, the food trucks have joined tornado-ravaged mobile homes in that big trailer park in the sky. That, I hypothesize, is mainly because of the appearance of gigantic food halls like Krog Street Market and Ponce City Market, which combine a few full-service restaurants with lots of stalls basically selling better-quality food-truck fare.

The fad is in its manic stage. A micro-hall, Canteen, has opened in Technology Square. It’s a mere four stalls from the people who run West Egg Café and General Muir — faves in my book. You can get Todd Ginsberg’s sandwiches and legendary burger (Fred’s Meat & Bread) and his Middle Eastern fare (Yalla), plus some bagel-centric deli food (TGM Bagel) and juice concoctions and cocktails (Square Bar). It’s all good.

Meanwhile, television celebrity Harry Pagansoss has opened Harry’s Caravaca, on Peachtree. Colony Square plans to open Main & Main, and many more are opening in the northern hinterlands of Alpharetta and Duluth. There’s already a super-popular one that’s part of the Braves’ new stadium, SunTrust Park, in Cobb County.

It’s all good, I suppose, even though I’ve already come to dislike them. Friends and I hit Ponce City Market last Friday. Granted, it was the holiday season, but it felt like an apocalyptic millennial food fight was about to begin at any moment. There are not enough tables in the hall to eat food grabbed from the stalls. The smaller full-service places were chaotic. In one, the host tried to cram three of us at a table meant for two. We got up and left. Finally, we ended at Hop’s Chicken, which I’ve enjoyed immensely in the past. But our fried chicken, thrown into boxes, ended up steamed, losing its crunch. I’ve heard many complaints that the food quality generally has dropped at the market. So you might want to do yourself a favor and explore the city’s exponentially growing new casual restaurants.

HERE AND THERE: Christiane Lauterbach publishes the city’s best resource for off-the-beaten-path restaurants, “Knife & Fork.” It’s an old-timey, six-page monthly newsletter. It’s not online, so you have to call her at 404-378-2775 to subscribe; it’s offering holiday rates now.

In this month’s issue, she gives a three-star, high rating to Jog-Ga-A-Dong-Chim in Duluth (3751 Satellite Blvd., 770-558-3763). The big winner there is a boiled pig knuckle, gigantic enough that a small one serves two or three people and comes with soup and a ton of pickles and sauces. I know how much you readers love your pig knuckles, and the good news is that the place is open late most nights.

Christiane also gives high marks to Muchacho (904 Memorial Dr., 404-748-9254). It’s open 7 a.m-4 p.m. for breakfast and lunch. Its culinary director is the fabulous Taria Camerino, our city’s preeminent chocolatier and pastry chef. You can get breakfast tacos, grain bowls, egg-topped avocado toast, poke bowls and pastries. The café is in the front of the converted depot that used to be H. Harper Station; the rear is occupied by another venue, the Golden Eagle. I’ve not tried the latter but one last-minute visit to Muchacho leads me to thank Christiane for the tip. Do yourself a favor and subscribe to Knife & Fork.