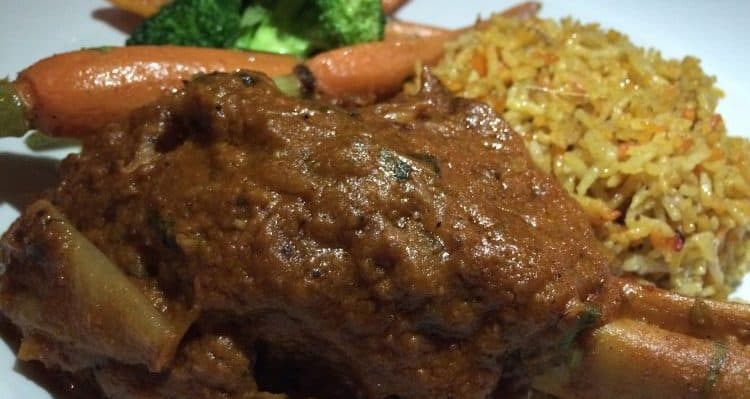 Despite being a few steps from the BeltLine, at least four restaurants have died at the location of the new Jai Ho (560 Dutch Valley Road, 404-458-6888. www.jaihoatlanta.com). If the crowd on a recent Friday night is an accurate estimation, Jai Ho just might make it. After all, its Hindi name means “let there be victory,” not unlike the co-opted Seven Dwarfs’ “hi ho, hi ho, it’s off to war we go.”

Jai Ho describes itself as a fusion of French and Indian cooking. An example is the lamb shank I ordered. It was slow-braised in a sauce of rosemary, almonds and herbs. It’s a clear deviation from the lamb I’ve tasted in other Indian restaurants, and I licked the bone after I devoured the meat.

There was, however, one thing about the dish that annoyed me big-time. The menu promises that it – like other chef’s specials – is served with rice, garlic naan and “mixed veggies.” The latter turned out to be three oversized florets of broccoli and three baby carrots. What the fuck? I unsuccessfully asked the servers to explain how these tepid, bland ingredients landed on the plate. Eventually, an apparent manager came to the table. He explained that the restaurant is all about fusion. I said I understood that, but does tossing broccoli and carrots on the plate really amount to fusion? “Yes,” he said, “It’s all about beauty.”

Whatever. Most of the food was good even if it didn’t appear so good. Another such one was a bowl of curry that looked unappetizing to say the least (I won’t make the specific vulgar comparison). But it, like the lamb sauce, provided a layer of clear tastes.

And then there was the opposite – an entrée of tilapia wrapped in banana leaves with south Indian spices. It looked pretty impressive, but tasted off-key, to say the least. Typically, I don’t order tilapia anywhere. I think of it as fish tofu, with little flavor of its own. Maybe you will like the dish, although my garbage-mouthed friend wasn’t impressed either.

My recommendation is that, instead of the tilapia, you order the whole snapper cooked in a clay oven called a tandoor and topped with shrimp curry. If you want to eat the most obvious case of fusion, order the spicy starter of mussels with shallots, ginger, curry leaves, crushed pepper and coconut flakes on a bed of yucca.

The menu here is close to gigantic, including 14 vegan and vegetarian entrees like navaratna (vegables, raisins and nuts in a creamy sauce), street eats (like masala dosa) and seven curries with your choice of chicken, lamb, goat and shrimp. There are five naans , including an odd one with nuts and raisins. There’s also a handful of desserts that I haven’t sampled.

The décor of the restaurant has not noticeably changed since its first incarnation. The dining room is large and l-shaped. The primo seating on these cool evenings is the patio. You would do best to make reservations in advance.

The verdict: I think most of the food is worth the prices, which range all over the place. I’ll return, but, please, no more broccoli fusion.