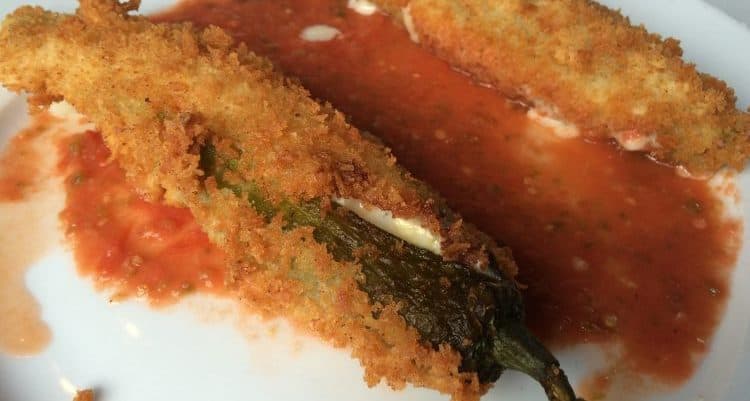 This week, we’re visiting a couple of hot spots. First up is the annual six-week homage to the renowned Hatch chile at Taqueria del Sol (2165 Cheshire Bridge Rd., 404-321-1118, and other locations, taqueriadelsol.com). I’ve written about this for over 10 years – ever since the restaurant began buying a few tons of the chiles during their brief harvest in the Hatch, New Mexico, area.

What makes the Hatch such a worldwide favorite among chileheads? For me, it’s in part its sturdiness. It usually stands up to roasting and frying, without losing its clean but subtle flavor, including a vaguely sweet note that plays with the spiciness. The Hatch does sometimes engage the delightful masochism of reaching the limits of one’s tolerance. Its spiciness is not predictable, but usually well below that of a habanero or Scotch bonnet.

Taqueria del Sol incorporates the fresh chiles in specials, but there is one that I always order. It’s not on the menu, but you’ll see a flier posted on the wall behind the bar. That’s the chile relleno. This is not your typical Mexican version made with a poblano pepper filled with meat and/or cheese, fried in a coating that ranges from thin to spongy.

Taqueria del Sol’s is filled with a creamy, melting cheese and served over a roasted tomata sauce. It’s kind of Southern-fried to produce a crunchy panko-like coating. They aren’t to everyone’s liking. A dyspeptic friend wrote: “I totally don’t understand the enthusiasm. Tasted like a giant jalapeño popper to me shoved inside a fried mozzarella stick.” I have no idea what a mozzarella stick is, but I sure as hell know the flavor is not that of a jalapeño, unless you’re reacting only to the heat. Taste the flesh!

The bummer this year is that the rellenos are not available at lunch. I recommend that you go early to dinner, like 6 p.m., to try them. I don’t know why, but the chile itself seems sturdier then. They are $6 each and two will fill most diners. Get a side of corn chowder if you need more. Please. Get over your fear of scalding your tongue and anus. Carry a pint of half-and-half and extinguish the flame as soon as it hits your mouth, if it’s unbearable. Vodka supposedly prevents intense spiciness.

I also paid a visit this week to the 2-month-old Festivals Jerk Chicken Grill in Glenwood Park (925 Garrett St., 404-549-9828, festivalsjerk.com). I love Jamaican food’s jerk seasoning, which ideally contains atomic Scotch bonnet chiles. Unfortunately, those are rarely available around town and the owner told me his clientele would not be able to tolerate them, anyway.

I get that, but the jerk chicken and (exceedingly dry) pork at Festivals is about the mildest I’ve ever tasted – even milder than at the non-Jamaican Eats on Ponce de Leon. I told the owner this and, again, he said he had to turn the spiciness “way down” for his customers. I hear this everywhere. He did say the spiciness can be amped up by sauces. The hottest was indeed intense, but also unpleasantly sugary. Sugar is a common ingredient used to temper heat, but this was too syrupy.

I also tried deliciously glazed plantains and callaloo, a mix of mysterious greens popular throughout the Carribbean. I prefer the leaves rough-chopped instead of Festivals’ texture of creamed spinach, but I’ve only eaten them a few times before.

The restaurant is obviously trying to appeal to everyone. There’s a kids’ menu, jerk pizza, jerk flatbread, jerk sandwiches, jerk tacos, even jerk eggrolls – and much more. The restaurant name, by the way, refers to a dumpling popular in Jamaica. The owner told me that its function is to temper spiciness, but, well, it’s delicious anyway. Amp it up, guys!