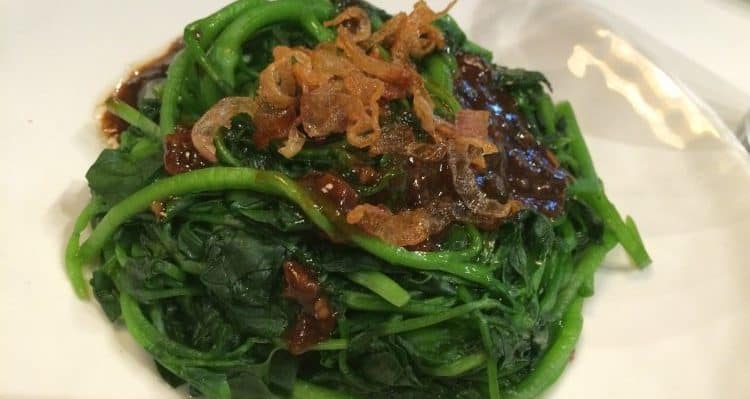 Here’s how it usually goes: You drive out Buford Highway in search of an “authentic, ethnic” restaurant. That means a hole-in-the-wall where lamb testicles are served amid a décor whose primary feature is a framed health department evaluation. The food is “exotic” and the prices are low.

That’s changing and the best example right now is Food Terminal (5000 Buford Hwy., 678-3530-6110, foodterminal.com), a new, mainly Malaysian restaurant that shocks the eyes if not the palate altogether. Although, it’s full-service, it is meant to resemble a contemporary Asian food court, completely free of stereotypical imagery. You’ll have plenty of time to check out the space while you wait for a table. Food Terminal has become wildly popular and you can expect a 30-minute wait.

The look and quality of the restaurant’s cuisine – mainly good “street food” – is not surprising when you realize it is from the same people who operate Mamak, Top Spice and the frantically multiplying bakery/café Sweet Hut, which everyone loves.

Five of us visited Food Terminal last Friday. During our wait, I browsed the 47-page menu. It’s actually in the form of a glossy magazine with highly styled photos of many dishes. You peruse it and, as you make your choices, you check them off on an order form. We ate a ton of food but didn’t come close to denting the menu.

Malaysian cooking is a fusion of Chinese, Thai and Indian cuisines, among others. In all honesty, my fiery mouth found much of the food bland. For example, a plate of crunchy, otherwise delicious okra was topped with sambal, typically a hot sauce. I literally did not get a slight sting from it. Ditto for the oddly tasteless Thai chili eggplant. The only fire on our table was some steamed Sichuan dumplings. Among other small plates and sides, watercress with black bean sauce was a favorite, while Chinese broccoli with oyster sauce lagged, at least for me. A bowl of springy fish balls was served tepidly tasty in a pink curry. Getting my drift? The food is good. It’s just not boldly flavored enough for me.

Larger plates did better. I ordered the gigantic noodle bowl of bone marrow broth with big cubes of pork belly. A few big pig bones were in the bowl with their marrow mainly out of reach. I sucked and sucked but each bone denied me my reward. Marrow did of course melt into the broth while cooking, making it a bit creamy, especially with the soft-boiled egg. The pork belly grossed out the rest of the table. “You’re eating pure fat!” Well, duh. Delicious.

Other large plates we sampled included classic rendang, sweet and spicy stewed beef. Actually, it was sweeter than spicy, but so it goes. “Grandma’s Barbecue,” a Cantonese dish, is served in several manners, but we got the version with tossed noodles. I liked it, as well as a chicken curry. I regret not trying any desserts. They get raves – not surprising since Sweet Hut is a sister restaurant.

Overall, I liked Food Terminal. The restaurant is barely a month old, and the overwhelmed kitchen will work out any kinks soon enough. Oh. If you have more than a 20-minute wait, I’d head to the huge City Farmers Market behind the restaurant. You’ll be amazed.