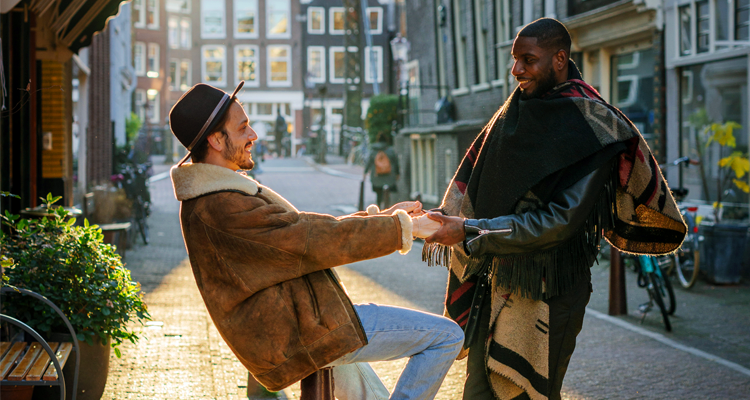 Historically, the Netherlands was one of the first countries—if not the first—to decriminalize queerness. Photo by iStock.com / Drazen_

In an era where trans women and queer people are often detained to be made political examples — sometimes indefinitely in the case of Brittney Griner — queer Americans must be proactive about their travel destinations. This starts with sticking to countries with histories of decriminalizing queerness and doing research on safe locales. Note, these are usually not tropical, “fun in the sun” destinations. Countries like the Netherlands, France, Spain, Norway, and Germany benefit from these legal privileges because of their exploitation of countries in the “global south”: Mexico, Jamaica, Dubai, Egypt, Singapore, etc. Traveling to these countries only exploits them further when they are still healing the wounds of Western exploitation. At times, Western white queerness simplifies this as “being illegal in [x] number of countries” without recognizing homophobia is a forcibly imported product — one that queer people born in these countries must deal with permanently.

Avoiding the perpetuation of neocolonialism

As a queer Mexicana on my reconnection journey, I struggle between the lines of responsibility, safety, and fun when traveling. I love the coastal beaches of Acapulco, but I also know the harm of an influx of U.S. dollars and bumbling tourists on already exploited Indigenous lands. Acapulco’s residents were the first victims of neocolonial gentrification. Each year more and more people — largely Indigenous and Black populations — are pushed out by the tourist economy. This means I choose to stay inside my family’s pueblo when traveling and avoid giving my money to tourist infrastructure. Putting my money directly into my community prevents disruption of the local economy in the summer with exorbitant spending (i.e. going to the corner store for groceries or relaxing on gatekept ancestral beaches). Many American and Italian tourists actively choose to price out locals for their rent, property taxes, and local businesses. Sadly, Acapulco was only the precursor to a larger emerging trend: American expats not only buying vacation homes, but also moving to Mexico to live as expats for cheap rent.

Most recently, the LA Times reported American expats wreaked havoc on Mexico City this summer. Locals reported that Americans largely occupy the city now and refuse to speak Spanish. Some go as far as entering verbal altercations when restaurant staff and cashiers do not speak English. Yoga studios occupy space where panaderias and bodegas once stood. Americans have made it difficult for locals to afford rent in the area and have driven inflation upward. At the same time, Indigenous Hawaiians are being arrested for protesting the construction of a $1.4 billion telescope on Mauna Kea, a mountain integral to their creation story and spirituality. So, how do we as queer people have our Y tu mamá también moment without participating in gentrification and neocolonialism?

First, we must recognize that not everything is intended for us — especially when it comes to Indigenous lands, no matter their status of protection. Furthermore, research is the best way to protect ourselves. As queer people traveling for study abroad, honeymoons, or the holidays, we need to be aware of local laws and cultural customs in our travel destinations. This means making the hard choice of dressing ‘modestly’ or consciously remembering queer PDA may not be the safest course of action. Even countries where homosexual behavior is decriminalized, like France, still have their share of homophobes — just like in America, we need to be aware of where we are welcome. The Interior Ministry of France in May 2020 noted in a Human Rights Report, “Homophobic violence and hate speech increased 36 percent in 2019, with 1,870 acts compared to 1,380 in 2018.“ No one wants to plan for the worst, especially on vacation, but we must be prepared. This means knowing how to find the nearest US Embassy in our host country; considering the European Health Insurance card if in Europe; and being aware of the nearest hospital in the event of an emergency. Also, traveling in a group of well-trained friends keeps everyone safe and happy with their ‘gram photos.

Okay, bitch, so where do we go?

I truly believe Amsterdam was made for the queers. And I mean, all the queers: the art girls, the sad girls, the party ’til 4 a.m. girls. It functions wholly as the gay capital of Europe.

Historically, the Netherlands was one of the first countries — if not the first — to decriminalize queerness. In 1993, the Netherlands enacted an equal rights law that banned discrimination on the basis of sexuality when receiving public services and retaining housing (these are rights still not enacted in the U.S. on a federal level, despite decades of fierce attempts by queer advocacy groups and liberation movements). Because of this, the Netherlands is home to many queer-owned and -patronized hotels, cafes, clubs and gay bars in Rembrandt Square, one of the city’s gay districts. The atmosphere is queer friendly and best experienced in the summer months.

As the capital of the Netherlands, it’s also home to the Van Gogh Museum and trippy, kaleidoscopic exhibits at the Moco Museum. Outside, there are plenty of canal tours day and night to showcase the rich Gothic architecture. Gay walking tours occur regularly to discuss iconic queer nightlife. One of the stops is the world’s first known openly gay bar, established in 1927: Café ‘t Mandje, opened by lesbian Bet van Beeren.

Obviously, Amsterdam is best known for its red light district, but there’s more there than an autonomous sex work zone and glass cases. Cannabis coffee shops allow you to smoke inside before a red-lit canal ride or take a walk through the Museum of Marijuana/Hash. A host of strip clubs and sex shops is also available. Most of these activities are priced around 10 to 30 euros per ticket. Getting around is affordable as well, since the city is very walkable. Train and bus fares to and from the Schiphol airport range five to 10 euros.

Amsterdam is the quintessential travel destination, providing art, nightlife, history, and culture to experience. Visitors can enjoy extremely affordable fares and excursions, and it is one of the safest places for queer people to travel and exist freely at no financial hardship to locals.