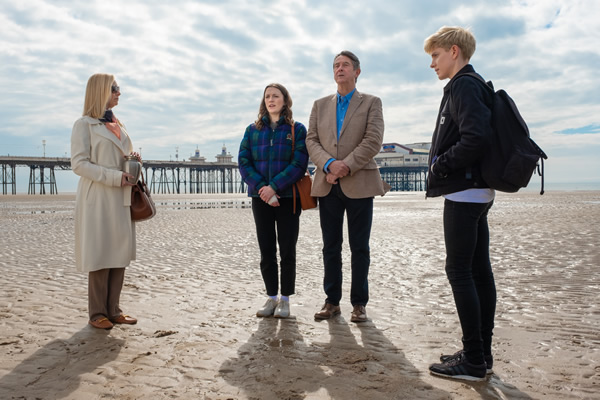 While you’re sheltering in place or just trying to observe the proper social distancing, streaming TV is an excellent way to keep yourself occupied and connected.

You can start by binge-watching the excellent “Feel Good” on Netflix. The semi-autobiographical six-episode series is loosely based on the adventures of creator and star Mae Martin, an award-winning actress and comedian. She plays Mae, a Canadian comic living in England who’s trying to stop her world from spinning out of control — again. She’s a rising talent on the stand-up comedy circuit and a recovering addict trying to navigate her fraught relationship with her parents and issues of gender and sexual identity.

She’s also a recently single hopeless romantic whose passion gets reignited when she meets George, a teacher and a classic English beauty. The two are instantly smitten with each other, but there are, of course, a few challenges. As Mae wryly observes, it’s like Mary Poppins making out with Bart Simpson, or an English rose matched with a corn cob (Mae is tall and thin with an unruly shock of blond hair).

George also confesses that she has never been involved with a woman before and has trouble telling her friends she’s dating Mae.

The series is fresh and funny, exploring these issues with a deft touch that nicely balances humor and heartbreak. Ally Pankiw (“Shrill” and “Schitt’s Creek”) directs all six episodes with a confident, steady hand. The series starts at a breakneck speed, capturing the manic energy of Mae’s mind and moods, then slows down to let the audience enjoy the ride to the fullest.

The cast is outstanding. Martin is passionate and endearing, diving into the highs and lows of Mae’s turbulent life, embracing both Mae’s appealing vulnerabilities and her annoying quirks. She’s a great comedian and a gifted actor.

Martin is well-matched by the superb Charlotte Ritchie as George. The two share a powerful chemistry. The sex scenes sizzle but there is an appealing warmth and naturalness to all of their interactions. Ritchie makes George’s reluctance to tell her friends about Mae a fascinating high-wire act, understandable yet infuriating.

Lisa Kudrow and Adrian Lukis are terrific as Mae’s parents Linda and Malcolm. Their relationship with each other and with Mae is thoroughly credible and funny. It’s easy to see where Mae’s struggles and strengths come from. The rest of the supporting cast is equally strong and enjoyably inclusive, especially Phil Burgers as George’s daffy roommate, Ramon Tikaram as the long-suffering leader of Mae’s recovery group and Sophie Thompson as Mae’s reluctant sponsor.

Meanwhile, Freeform has started dropping weekly episodes of the intriguing new series “Motherland: Fort Salem.” In this fascinating alternative American history, the Salem Witch Trials have been replaced by the Salem Accord. The witches have reached a truce with the Massachusetts Bay Colony (and later the United States) and have agreed to form an elite fighting squad to defend the country.

In present-day America, the witches are defending America against The Spree, a deadly terrorist force. Three young witches, all descended from ancient bloodlines, are called into basic training at Fort Salem under the watchful eyes of General Adler (the stern Lyne Renee) and Anacostia, a tough but funny drill sergeant (Demetria McKinney).

The ambitious Abigail Merriweather (Ashley Nicole Williams) is part of an elite military family; Tally Craven (Jessica Sutton) has enlisted over the passionate objections of her pacifist mother; and Raelle Collar (Taylor Hickson) is still grieving the recent death of her mother on the front lines.

The tense relationship between the three recruits is tested even further when Raelle becomes romantically involved with the mysterious Scylla (Amalia Holm), a young witch with dark secrets of her own.

In the episodes available for preview, the series gets off to a strong start. The acting is strong with the largely female cast quickly creating distinct and interesting characters. Under the guidance of creator Eliot Laurence (“Claws” and “The Big Gay Sketch Show”), the series creates an exciting new world where traditional gender roles are flipped and where an elite female fighting squad depends on supernatural skills and the power of women’s upraised voices as much as on advanced weaponry and physical prowess.

Unfolding weekly over the next 10 weeks, the world of “Motherland: Fort Salem” is well worth a visit.