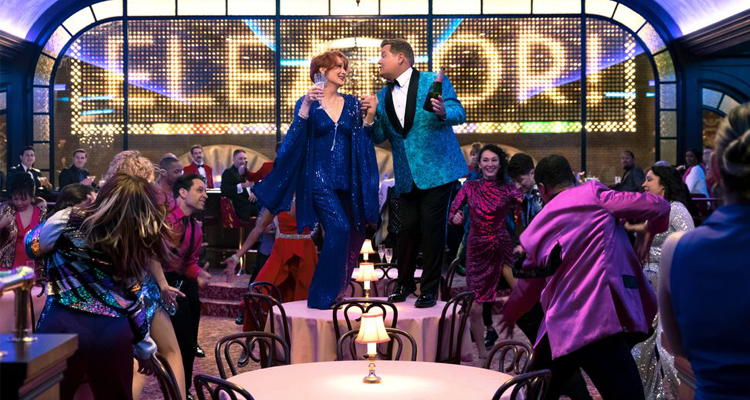 Ryan Murphy is known for being busy, but when he saw the musical “The Prom” on Broadway in January 2019, he knew he wanted to add it to his schedule by making a film version. It didn’t take long before he had a heavyweight cast in place to tell the story of a teenage girl who wants to take her girlfriend to her high school prom.

If the story sounds familiar, it should be for Atlanta audiences. “The Prom” had its world premiere as a musical at the Alliance Theatre in 2016 before moving to Broadway in 2018 and being nominated for six Tony Awards.

With a screenplay by Chad Beguelin and Bob Martin and music by Matthew Sklar (all adapted from their earlier stage work),”The Prom” stars Meryl Streep and James Corden as Dee Dee Allen and Barry Glickman, two actors who have just opened in a Broadway flop. With prompting by fellow performers Angie Dickinson (Nicole Kidman) and Trent Oliver (Andrew Rannells), the four decide to take up a cause to enhance their likability. When they find out about Emma Nolan (Jo Ellen Pellman) — whose high school shut down the prom because she wanted to bring her girlfriend — they realize coming to her rescue will be a great public relations move to boost their careers.

Others in the cast include Ariana DeBose as Alyssa Greene, Emma’s secret girlfriend, Kerry Washington as Alyssa’s mother and the head of the PTA, and Keegan-Michael Key as the school’s principal. Murphy and the cast took part in a press conference a few weeks ago to discuss the new musical.

“The heroine is from Indiana, and I’m from Indiana and was not able to attend prom,” Murphy said of the film. “It became a very personal thing for me, and I thought [the show] had so much joy. It was about something [important], but it was just fun. I had dinner with the producer and told him I wanted to make it. I loved how this made me feel. It was very old fashioned.”

Pellman, also from the Midwest, came out in high school and also personally related to the story. She counts herself lucky for having such a high-profile project as her film debut. “Being able to tell this story with this cast is literally a dream come true,” she said. “Every day on set was the best day of my life, learning from these people who I have been looking up to for so long.”

DeBose is familiar to Atlanta audiences, featured in the Alliance’s “Bring it On.” A Tony Award nominee for “Summer: The Donna Summer Musical,” she will be seen as Anita in Steven Spielberg’s version of “West Side Story” next year.

What she loves most about the musical and the subsequent film version is its representation of two young women in love. She noticed many young girls, especially young girls of color, in the audience the times she saw the work on stage. “I know how important it is to see yourself on screen. [Seeing this play] was the first time I had seen anything like my experience on the Broadway stage.”

The film production was shut down earlier this year because of COVID-19, but Murphy was able to resume filming this summer and renewed his priority to get it in front of audiences before Christmas.

The cast had to go through something of a boot camp before filming began. “We trained as much as we could,” Murphy said. “There is usually not a lot of rehearsal when you’re doing film or television, but we built it in.”

Streep had not seen the musical before Murphy suggested she see it. “I noticed the leading lady did not do a lot of dancing,” she recalls. “I was very encouraged, but all hell broke loose when I got to Los Angeles and they laid out for me what it was. It was a lot of dancing. I got in shape. It was hard work but really really fun.”

Washington, who admits she enjoyed playing the almost-villainous Mrs. Greene, believes that culture and work such as this can educate and spark change. “There is talk about how as a culture we have to heal now. I told a friend, ‘I think for a lot of people where they sit in the dark and have transformative thoughts is in movie theaters or [the] living room.’ When we watch these stories, they inform us of who we are as a society. We get a chance to see these stories and see myself or see who I don’t want to be. This is a very powerful story of acceptance and the power to create community where you need it.

“The Prom” debuts in area theaters and on Netflix Dec. 11