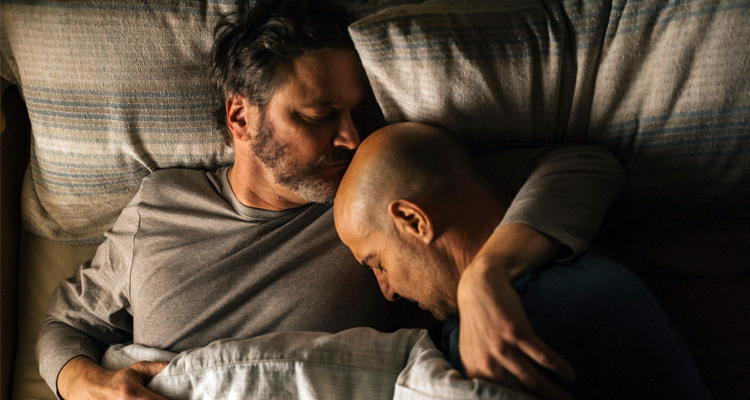 When the Atlanta Jewish Film Festival, the city’s largest film festival, gets underway February 17, it will look a little different from previous seasons. It’s a virtual event, save for some drive-in screenings, but the LGBTQ content is still abundant.

Five of the selected films this year have LGBTQ themes, including “Sublet.” Directed by legendary director Eytan Fox (“Yossi & Jagger,” “Yossi,” “The Bubble” and “Walk on Water”), “Sublet” tells the story of a New York Times travel writer (John Benjamin Hickey) who visits Tel Aviv and takes an apartment belonging to a younger Israeli man (Niv Nissim), a filmmaking student. The two slowly get to know each other and form an unlikely friendship. It’s a masterful work, perhaps Fox’s greatest film, with characters full of nuance and subtlety. Both Hickey and newcomer Nissim are exceptional.

The other films with LGBTQ themes are the dark comedy “Shiva Baby” (beautifully adapted from a short film version), the drama “Minyan,” the theater documentary “On Broadway” (a love letter to the Great White Way), and the comedic opening night film, “Kiss Me Kosher,” which features a lesbian couple at the center. Also on tap are drive-in screenings of “Spaceballs” and “Little Shop of Horrors,” retrospective screenings of “The Chosen” and “Brighton Beach Memoirs,” and virtual conversations accompanying select films. Full disclosure: I moderated a Q&A with “Sublet’s” Fox, Hickey and Nissim, which accompanies the screening.

New in theaters is the drama “Supernova,” which stars Colin Firth and Stanley Tucci as longtime gay couple Sam and Tusker, respectively, on a road trip as one faces dementia. About five years ago director Harry Macqueen was working — unbeknownst to him — with a lady who had early onset dementia. A year later she passed away from it, and he wanted to learn more about the condition. He ended up working for a long time at a university in London specializing in it, interacting with people who were living with the condition and being a part-time caretaker for them.

“The film is inspired by the time I spent with those people,” Macqueen said. “I wasn’t planning on making a film, but I was moved by it. It was a good two years before I put pen to paper. I wrote the script and got involved with the producers. Things moved quickly from there. Colin and Stanley came aboard, and things moved real quickly, as these things usually do.”

The first time Macqueen met with Tucci, the two talked about who could play opposite him. “Stanley suggested Colin,” he said. “They have worked together before and are best friends. Colin had already read the script.”

The director feels the two are ideal for their roles. “Colin and Stanley, it goes without saying, are incredible actors. They are incredibly mercurial, and everything they do is so different. They have range but also bring a lot of emotional clarity and depth to everything they do. They effortlessly seem to nail the energy and tone of the piece they’re doing. I think that is difficult to do, but they also bring passion and empathy to the roles they play. That is essential for a piece like this. They also enjoy each other in their personal lives.”

Macqueen initially cast the film the other way around, with Firth as Tusker and Tucci as Sam. The actors felt the director should try it differently and “auditioned” for him. “They were absolutely right,” he recalls. Both actors are receiving acclaim for their work, with Tucci getting some serious Best Supporting Actor Oscar buzz.

An old controversy has surfaced again of late about the hiring of heterosexual actors to play LGBTQ roles. Macqueen is aware of that. “Representation in that way is a very important part of how we make films and I spoke to the actors and they spoke to me and we’ve not stopped talking about it,” says Macqueen. “I do think you have a duty to make sure your process as a filmmaker in casting is an open-door policy as much as you possibly can. We did that, but you do have a duty to the project to get it off the ground in the most powerful way you can. This is very specific involving two actors of a certain age who know each other.”

LGBTQ representation and diversity were very much part of the crew, however.