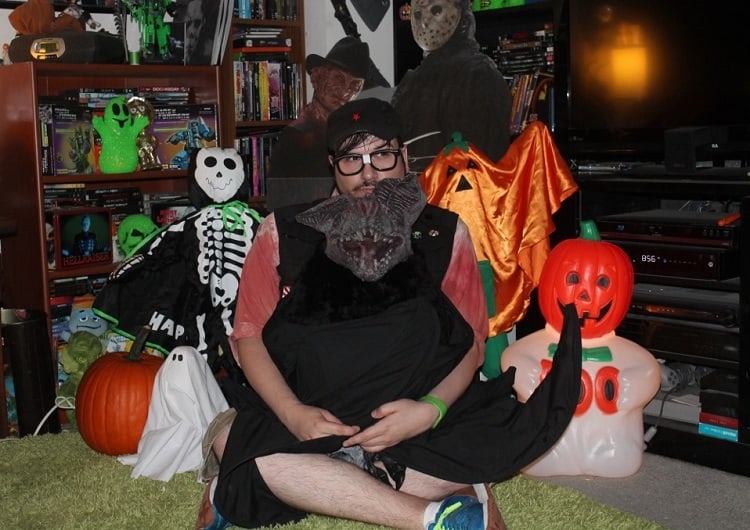 He doesn’t just like to dress up for a costume party or put a bowl of candy out on the doorstep for the neighbor kids. He believes in Halloween—the history, the rituals, the mythology.

“I understand the decoration part of it and everything, but you’re supposed to have a pumpkin lit on Halloween night wherever you’re sleeping because it wards off spirits,” he tells the GA Voice.

Ray has taken that longtime belief and dedicated September and October of every year to celebrating the holiday and spreading Halloween fear, becoming the event’s biggest advocate in Atlanta.

When he’s not working as a production coordinator on shows like “Squidbillies” or “Aqua Teen Hunger Force” for Adult Swim, you can find the bi East Atlanta resident working at the Atlanta Zombie Apocalypse haunted house, shooting a Halloween-themed version of his “Sparkle Hooves” web series, riding a float in the Little 5 Points Halloween Parade or finishing up his latest short film “Satanic Panic 2: Battle of the Bands,” premiering Nov. 22 at the Buried Alive Film Festival.

‘YOU HAD ME AT APOCALYPTIC’

Ray’s passion for all things Halloween goes back to when he was four or five years old with his imaginary friend Colleegia, who had a pumpkin head and a ghost’s body.

“I think it started there because every time I see that pumpkin image it reminds me of a friend or something that took care of me, like Mary Poppins or something,” he says from his home at the Roosevelt Historic Apartments, an eerie-looking former all-girls school built in 1927 and converted into apartments in the late 1980s (see left). The endless hallways and interior color scheme echo the Overlook Hotel from “The Shining” so much that you half-expect to turn a corner and run into the film’s creepy twins. And yes, Ray moved there because it looked spooky.

His first Halloween costume was Bugs Bunny. As he grew older, he took more and more interest in and ownership over the holiday. By 12, he had taken over putting up the Halloween decorations every year at his family’s Riverdale home. His interest never waned as he made his way into adulthood, and his enthusiasm has won over potential critics.

All the videos and short films Ray creates are presented under his production company, “Ebola Entertainment,” the YouTube account of which recently passed two million views. However, recent headlines have led to some commenters talking less about the content itself and more about the Ebola virus.

“The last Sparkle Hooves was in Out On Film and people were laughing, but then the credits roll and it says ‘Ebola Entertainment’ and you hear people go ‘Ooooooo,’” Ray says, laughing. But he says he’s used that name for years and has no plans to change it now.

He’s been a frequent participant in the Little 5 Points Halloween Parade, either with Chamber of Horrors, Atlanta Zombie Apocalypse or this year, Adult Swim. He dressed as a banana and sang the song “Banana Split Girl” to the tune of Gwen Stefani’s “Hollaback Girl.”

Atlanta Zombie Apocalypse was created by Plaza Theatre owner Jonny Rej and Shane Morton, master of ceremonies at the Silver Scream Spookshow. Rej and Morton reached out to Ray when the idea was in its infancy.

“Jonny and Shane were like, ‘What do you think about an apocalyptic truck stop kind of place?’ and I was like, ‘You had me at apocalyptic,’” Ray says. He’s taken part ever since.

‘IT’S OKAY TO BE SCARED’

Ray also has a popular movie review blog with over half a million hits so far, and the content goes Halloween-heavy once the season rolls around. He recently posted an extensive guide to Halloween in Atlanta, and he once presented a ranking of his favorite Halloween films, or as he called it, “My Top 35 Spooky Ass Films I Watch During Halloween.” The 1978 John Carpenter classic “Halloween” nabbed the top spot, of course.

“That’s probably the first movie that scared me when I was little,” Ray says. “I have memories of lying in bed with a cover over my head and it was on TV and you hear the music and I remember going, ‘Shut the fuck up with that music, I don’t want to hear that music.’”

But he learned to embrace the fear and gain an appreciation of it over time.

“You realize that that was important that I was scared. It’s okay to be scared,” he says. “I can’t imagine not having those memories of being afraid because now I can’t watch movies and be scared. I can tell you if it’s scary for other people, but I’m not scared watching it. I miss being afraid of watching something.”

He doesn’t hesitate to name the most overrated horror films, citing the “Saw” movies.

He’s going as “Scooby-Doo” villain Zen Tuo to this year’s Rock and Roll Monster Bash on Saturday, Nov. 1, but as for the big night on Friday the 31st?

“I’ll have to work at the [Atlanta Zombie Apocalypse] haunted house for sure, I probably won’t get out of there till about 1 or 2 in the morning,” he says. “But I will have a lit pumpkin there.”

1. Halloween: The best horror film of all time because John Carpenter is gold. I thanked him once for the joy he brought to my life.
2. The Fog: A John Carpenter classic, everything about this film is brilliant to me even the score.
3. Trick ‘r Treat: This film is incredible and should be a staple film to watch on Halloween. You will learn a lot about the season in this film. Do yourself a favor: buy this film today. Do not rent it, buy it!
4. Halloween II: A sequel that made me scared shitless of hospitals and was just as fun to watch as the first.
5. The House of the Devil: This throwback to the 1980s is gold and it is quiet, moody, scary and satanic. Watch it and you will be spooked. The Director Ti West knows what he is doing.
6. The Return of the Living Dead: The best zombie movie ever made, and some of my favorite dialogue in film period. Amazing soundtrack too.
7. Hellraiser: Humans are the bad guys in this amazing horror love story.
8. Friday the 13th Part VII: The New Blood: My favorite of the Jason Voorhees/ Friday films. The teens ruled, and the telekinetic concept is amazing to me.
9. A Nightmare on Elm Street 4: The Dream Master: My favorite of the Freddy/ Nightmare films. The teens are fucking incredible in this film.
10. The Descent: This film made me jump twice. I don’t ever jump in movies. The plot is simple and brilliant and gave me a panic attack.

*From Eddie Ray’s blog at eddieraysmoviereviews.wordpress.com

Here’s one of his latest Sparkle Hooves video, just in time for Halloween:

Sparkle Hooves: My House is Haunted Bitch! from Ebola Entertainment on Vimeo.