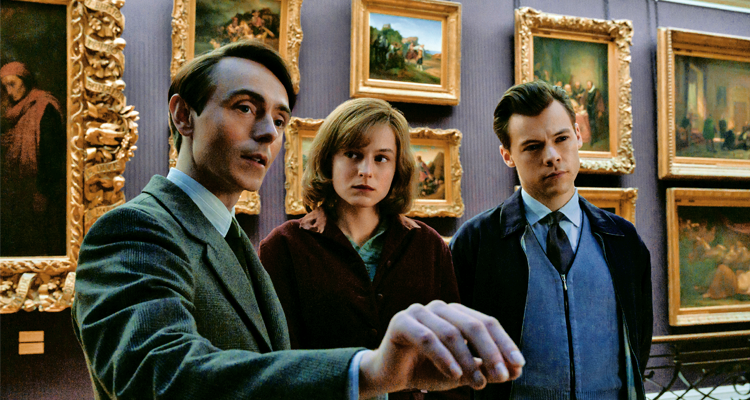 Despite Cast, ‘My Policeman’ Disappoints, while ‘Tanya Tucker’ is a Moving Documentary

One of the big-buzz projects of the year before its debut at the Toronto International Film Festival was “My Policeman,” one of 2022’s more prominent LGBTQ titles. Despite some big names in its cast, however, it’s a hefty disappointment. The prestige seeped out of this one the moment audiences began seeing this lethargic work.

It’s based on the book by Bethan Roberts and follows three characters who meet in 1950s Britain. Tom (Harry Styles) is a policeman who meets Marion (Emma Corrin), a teacher who falls for him. Tom likes to bring along museum curator Patrick (out actor David Dawson) on their dates and soon all three are hanging out together. As it turns out, Tom and Patrick have started a relationship that they have to keep hidden. Things do not end well, with something of a twist, and 40 years later this trio (now played by Rupert Everett as Patrick, Gina McKee as Marion and Linus Roache as Tom) are brought together again.

As directed by Michael Grandage, this is an ambitious, epic tale of regret and unrequited love. The screenplay has been adapted by Academy Award nominee Ron Nyswaner. “My Policeman” does do an effective job of showing what life was like in the ’50s for gay men, having to constantly be aware of their surroundings and every glance they make. Yet this is a period piece with little at its center, despite some beautiful scenery/cinematography. It’s also very slow-moving.

Much has been made about the nudity and sex scenes between the two men, yet there’s not much passion between Styles and Dawson and this is often a joyless, dire watch. A few moments of suspense surface as to when Marion will find out the truth, but the ’90s sequences are flat, with Roache disappearing for most of the film until the end. One of the modern-day characters looks at a gay couple with ruefulness — it’s one of the few moments that really stick. The last five minutes do pack a punch, but it’s just not worth the wait.

She is iconic in the music industry, having recorded “Delta Dawn” at the age of 13 and amassing a body of popular singles and albums. Now, after years away, Tanya Tucker is attempting a comeback of sorts, instigated by Brandi Carlile. In “The Return of Tanya Tucker: Featuring Brandi Carlile,” the beloved out artist Carlile writes an album for her hero Tucker, hoping she will record it and finally get more of the respect she deserves. Carlile proves to be Tucker’s biggest fan and some of the more satisfying moments here have her listening to Tucker and hearing her idol perform. After they work together awhile, Carlile is hopeful of success, but also wonders to her team if Tucker is indeed ready for the limelight again.

There is very little lesbian content here, although Carlile is omnipresent in the film and at one point introduces her wife to her icon. It’s a tremendously engaging film, however. Tucker herself is a wonderful center. The documentary doesn’t dig deep into her wild side, but it does present her as a complex woman, dealing with some of her issues and trying to get it all together for this collaboration. Directed by Kathlyn Horan, “The Return of Tanya Tucker” is balanced efficiently between modern-day moments and looks at her early life, which included a relationship with Glen Campbell. The story of how teenage girl Tucker turned down the opportunity, “The Happiest Girl in the Whole USA” for the more adult-natured “Delta Dawn” is also quite intriguing.

“My Policeman and “The Return of Tanya Tucker: Featuring Brandi Carlile” are now playing in area theaters. “My Policeman” debuts on Prime Video November 4.