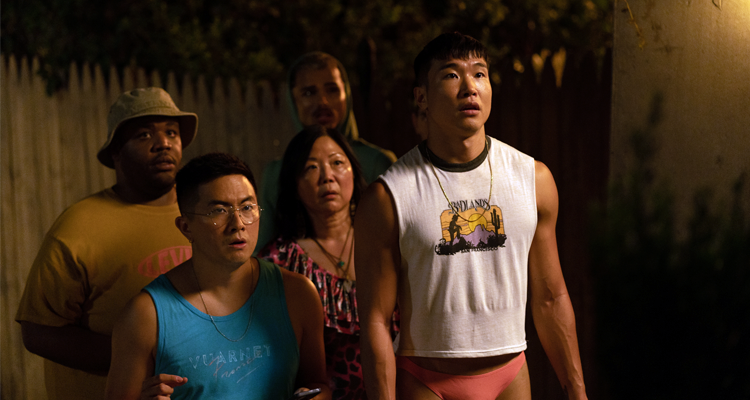 A year into the COVID pandemic, out director Andrew Ahn received the script for Joel Kim Booster’s “Fire Island” and knew almost immediately he needed to make it.

“It was a lonely time for me — I had not seen my friends for a long time and I wasn’t able to go out dancing and drinking and be able to spend time with them,” he told Georgia Voice. “I saw in his screenplay everything I was missing in my life, and so I really wanted to be part of it. I love how it talks about this queer Asian American relationship and celebrates chosen family and queer joy. That for me felt really meaningful to help bring to culture.”

“Fire Island” is a romantic comedy about best friends Noah (Booster) and Howie (Bowen Yang), who head to the New York gay mecca for a summer vacation with their friends. Their annual tradition is staying at the home of Erin (Margaret Cho), a lesbian who has bonded with the group over the years. Noah makes it his mission to make sure Howie has a week full of romance and fun, but both men find prospective romantic partners. Booster’s script very cleverly parallels Jane Austen’s “Pride and Prejudice,” and the cast also includes Conrad Ricamora of “How to Get Away With Murder.”

Ahn and one of the stars of the film, Torian Miller, who plays Max, were in Atlanta recently to screen and promote the film.

Some of the cast members were already friends before the film, such as Booster and Yang, and Matt Rogers is a good friend of theirs as well. Others were new, and Ahn wanted to make sure the core groupfelt authentic.

“I love being able to bring their authentic friendship to screen. It feels so lived in; there is a history and comfort around each other,” he said. “They are so vulnerable together in their scenes together. I wanted to find that sense of familiarity even for those who had not known or worked together before.I was looking for actors who understood the uniqueness of the project and why it was special, and I was looking for people with really good hearts. I want audiences to fall in love with them.”

Getting to chat with Miller and Tomas Matos and then meeting Margaret Cho, who he had never met, Ahn could tell they were right for the project.

“I knew they would create a family together organically,” he said. “I really love the central family in the movie.”

It was also very special to be able to direct a film with an all-queer cast.

“For me, I know how talented this community is, and I wanted to give queer actors the chance to show themselves off and become the stars they deserve to be,” Ahn said.

“I wanted to cast queer actors for these roles. I knew production was going to Fire Island and I wanted to go with a bunch of gay people. We set out to find the best actors and I am so glad we can show off the diversity of the gay community. In the script only Joel and Bowen’s characters had their ethnicity specified. We wanted to find a cast that was reflective of the community. We saw hundreds of tapes and for me it was exciting that we got a group that is talented and got along and could give you the sense of chosen family.”