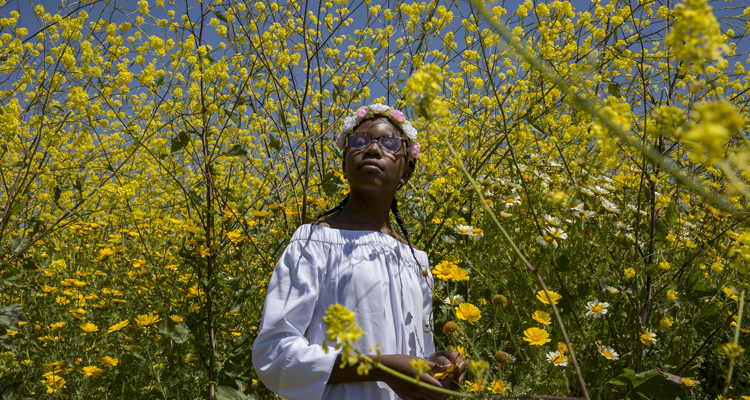 “A Love Song for Latasha” is now available on Netflix.

Films to Watch: ‘A Love Song for Latasha’ and ‘Moffie’

When the Academy Awards® take place this year on April 25th, out filmmaker Sophia Nahli Allison hopes to hear her name called out. She is a nominee for her short film, “A Love Song for Latasha,” which she directed, and which is nominated for Best Documentary Short.

“A Love Song for Latasha” is an experimental short documentary that re-imagines the life of 15-year-old Latasha Harlins, a young Black girl who was wrongfully killed in South Central Los Angeles 30 years ago by a store clerk who thought she had stolen a $1.79 bottle of orange juice. The clerk served no time and received only probation and a fine for Latasha’s murder. The film explores Latasha’s life through two people close to her — her best friend and her cousin.

Allison herself is a native of South Central Los Angeles and is interested in making sure the stories of Black women and girls are not erased and pushed into the background. “I did not want Latasha to exist just in the context of her death,” she said. “I wanted her to be surrounded by life, the dreams she had. That was important.”

As a Black queer woman, Allison says she is deeply invested in telling stories about Black women, Black girls, and Black queer folks. “I want to continue seeing us take up that space to tell these stories,” she said. “There is a care we bring to it, that is needed. For me, I am inspired to see us as a community tell our own stories. I am excited to expand as a Black queer woman what it means for my voice and my story to be nourished.”

She was asleep in bed the morning the Oscar® nominations came and woke up to text messages about the news. “It felt like a dream,” Allison admitted. Only nominees are allowed inside the ceremony this year, because of COVID-19, and she is ecstatic about being one.

Now in theaters and streaming, “Moffie” is an extremely well-made look at a closeted gay man in 1981 South Africa who has to complete two years of compulsory military service. It’s the time of apartheid and also a time when being gay was illegal. Director Oliver Hermanus, who is gay, read the book of the same name and decided he wanted to make a film about this generation of men and their experiences in the army. It took about five years to develop the script, write it and cast it.

“The movie is about shame, shame in working through discovering your sexuality in a context where you immediately assume that that context will not accept you and so you self-shame and you reduce yourself to hide the person you are,” Hermanus said. “That is the thrust of the film for me and that’s part of the reform that was most personal to me.”

Star Kai Luke Brummer, who spent a year and a half auditioning, plays the main character of Nicholas. He sees Nicholas as someone who doesn’t know what he really wants. “All he knows is that he really needs to get away from his family,” said Brummer. “Through his experience in the army he forms a sort of dysfunctional family, and within that he finds someone who sparks something in him that becomes the driving force for the rest of the film.”

His relationship with Dylan, who he meets in the army, brings up something new in him: “He feels acceptance — Dylan provides that.”

In 2018, the documentary, “When the Beat Drops” — which was made in Atlanta and features Atlanta subjects — appeared on Logo and hit the film festival circuit, telling the story of the underground dance phenomenon known as bucking. It was a sensation at, among others, Out On Film, where it won the Best Documentary Award. It’s now out on DVD, as well as streaming. The subject of the film, Anthony Davis, passed away in 2019, and he is mentioned in audio commentary tracks by both director Jamal Sims and producer Jordan Finnegan.

Finally, the 2021 Atlanta Film Festival is here, running through May 2. Some of the LGBTQ films in the lineup include the Georgia-filmed “Landlocked,” starring trans actress Delia Kropp in a great turn as a trans woman looking to connect to her son, and “See You Then,” about two women who haven’t seen each other in more than 10 years — one of whom has since transitioned.

“A Love Song for Latasha” is available on Netflix.

“Moffie” is now playing in theaters and various streaming services

“When the Beat Drops” is available on DVD April 27

The Atlanta Film Festival runs April 22 – May 2 at the Plaza Theatre, indoors and outdoors, Dad’s Garage outdoors and online.